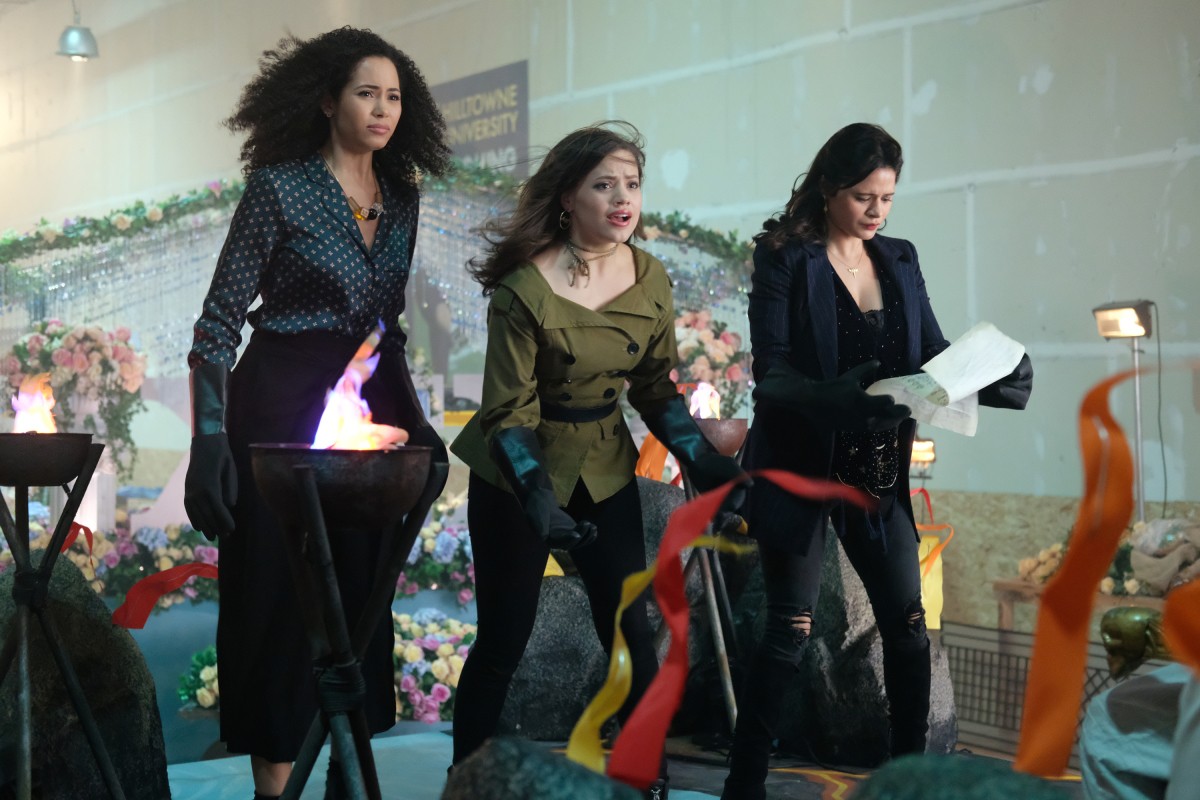 How in the hell did we get here?

Episode 4 opens with a flashback to Angela Wu, Marisol, and Mel 6 months before all hell broke loose in Hilltowne. Angela shared what Professor Thaine did to her with the women, and Mel did her best to convince Angela to report him. We know what ended up happening after that…

Here and now, Angela has the Harbinger demon trapped inside her, and she’s chained up in the Charmed Ones’ attic. Mel is feeling some kinda way about everything and keeps trying to find signs of Angela in there. The elders still haven’t shown up, and shit keeps poppin’ off in the attic, not to mention a surprise visit from Niko and Trip (her partner). They’re ins search of Angela, who was last seen at the Kappa’s Halloween party at the sisters’ home. 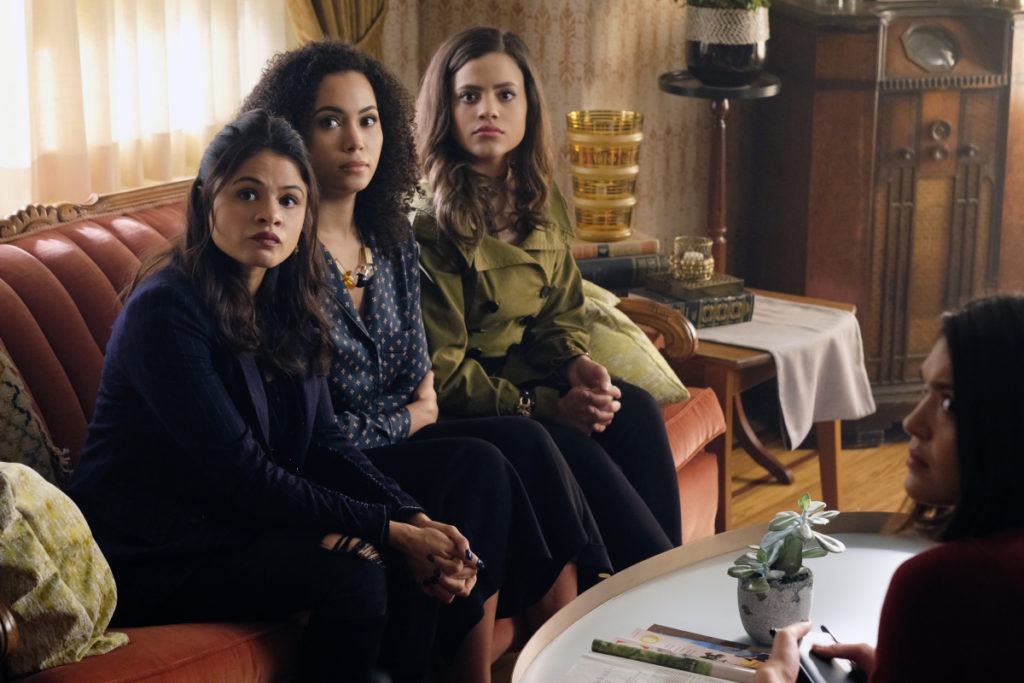 The questioning starts to get a little heated, the witches are horrible liars, and the Harbinger is doing what trapped demons do; you know, banging around growling and tryna get free. The officers are about to start snooping when in walks Mary Poppins meets Martha Stewart. This must be a witch, because she rang zero bells upon her entrance and came bearing all of the excuses for the racket in the attic. Weird time for some interior decorating, but okay. The excuse works and the officers leave. Trip ain’t buying it, and you can tell by the way he keeps looking around as he and Niko leave. 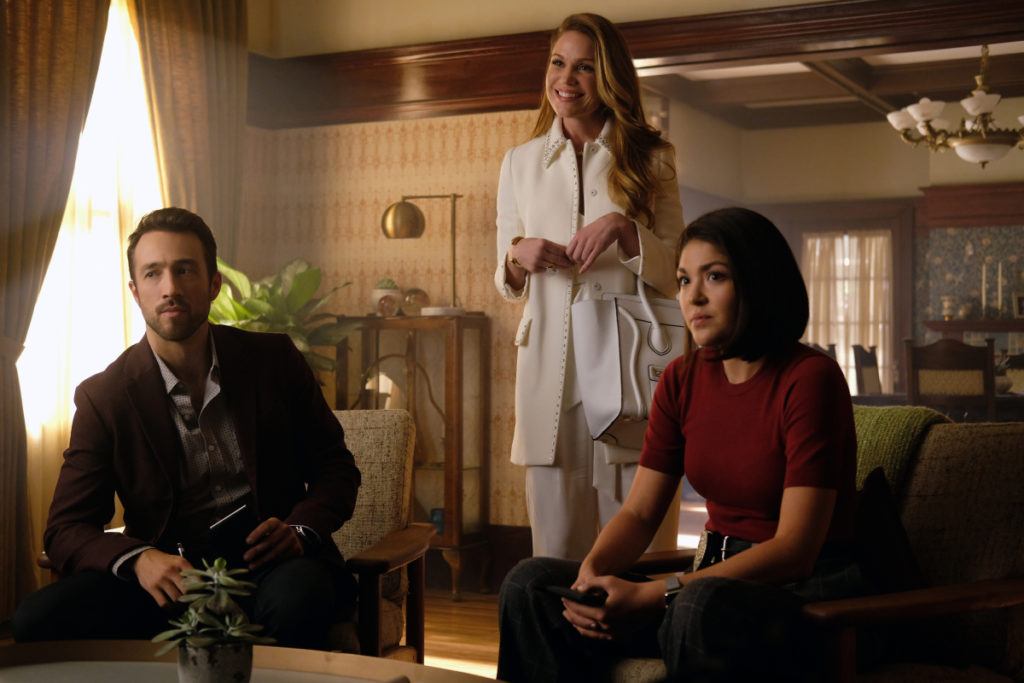 The Elder Has Arrived

To be called a witch is an understatement. Someone with a power suit like that is more than just a witch, Charity is an elder. Not only that, her handbag is full of swords and instructions for Mel, Maggie, and Macy to kill the Harbinger before the full moon, but that means killing Angela and Mel ain’t about to let that happen and recommends an exorcism. Charity isn’t having it and not all three girls are committed to the idea of saving one for thousands. One touch from the Harbinger, and its curtains.

Charity gave Mel the task of keeping an eye on Niko, but instead, Mel heads to the Book of Shadows to find a spell that will help her see if Angela is really there or not. Meanwhile, Trip and Niko are reflecting on their conversation with the sisters. Trip isn’t buying their innocence, and Niko is letting him know how threatening cops are to people of color…Mel ain’t nervous for no reason, homie.

Which Circle of Dante’s Inferno is This?

Maggie is flunking her world history class, but when she finally shows up… guess who’s there? Lucy and Parker. Maggie has been missing most of her Kappa pledge responsibilities because of her, you know…. witch shit. Lucy’s not trying to have Maggie cop out or bring down the sorority house’s GPA, so she enlists Parker (boyfriend/dude who was pining over Maggie last week) to help Maggie study. Problem solved? Yeah, right.

Maggie isn’t the only one with trouble in love. Macy hasn’t given her wannabe beau/bae Galvin any attention while she’s been saving the world. He’s trying so hard to get in there, but Macy’s schedule is full of demons and shit. He doesn’t know that, so it looks like she’s just dissin’ dude every chance.

Mel’s back at the crib searching for Angela. She eventually finds the right spell and yeah, she was right. Angela’s soul is trapped inside the Harbinger. Charity still wants the Harbinger gone and doesn’t believe an exorcism will work with this demon. She’s putting her foot down with Mel. She just has no idea who Mel is….

Five minutes later, Mel has Harby/Angela in the back of her hatchback. She finds Maggie and convinces her to help with the exorcism. They realize that Trip is following them, Mel bends time, and they get the eff outta dodge.

Macy may not be able to find time in her schedule for Galvin, but she sure as hell found out what kind of communicable disease the Harbinger is passing along to kill rats with one touch. She shares her scientific findings with Charity and Harry. When the head to the attic, they realize that Harby is gone.

Mel and Maggie decide to hide and tie the Harbinger to the Kappa float. Mel is determined to save Angela, she feels as though everything Angela Wu has been through is her fault. Harry tries to convince her otherwise while Charity is at the house telling Macy a bit about her past. Marisol and Charity were friends, good friends. Charity realizes that a spell she cast on her friend years ago to wipe away pain was due to the loss of Macy. Macy gets a text from her sisters and uses her tears as a way to get out of the house to help them.

When Mel asked the Book of Shadows to show them an exorcism spell, the page was blank… until Macy showed up. Magic revealed that Marisol saw this coming and prepared for the sisters to help Angela get free with a Santerian spell. That spell requires the sisters to touch Angela, and Maggie ain’t about that “hear a demon’s thoughts” life.

Harry finds a vessel to lock the demon in. Macy recommends science aka gloves to help keep them safe and while she and Mel go to find them, Maggie distracts Parker who shows up unannounced. In a desire to keep Parker from seeing the Harbinger, she kisses him. There’s an attraction there, but he’s Lucy’s boyfriend. It’s a scary move, but so is every other move in this exorcism. 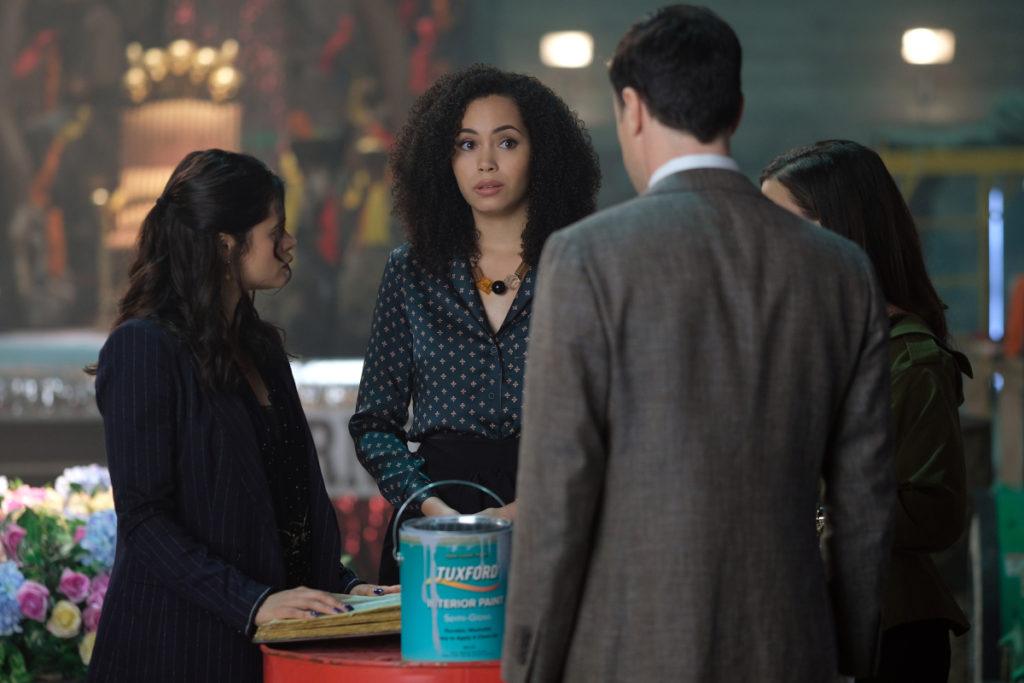 When the Harbinger begins to get out of control, Harry tries to step in but needs Charity’s help. She’s summoned with her compass and breaks out a damn lasso to tie up the demon. Charity reaches in that damn handbag and starts pulling out swords, ordering the sisters to kill the Harbinger before the full moon. They all refuse. 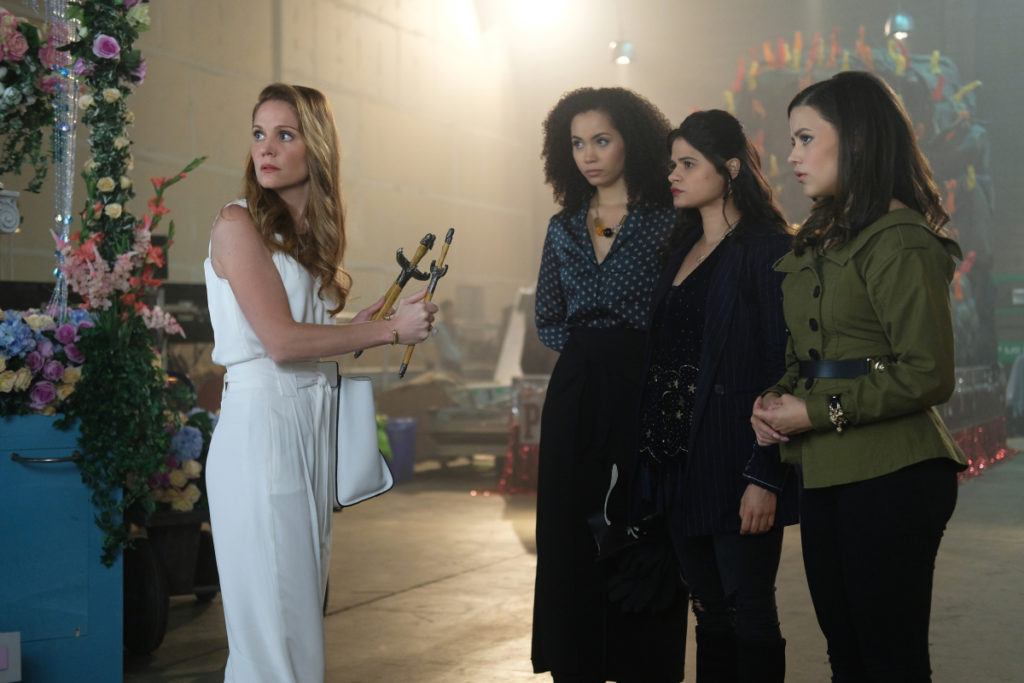 The sisters are finally able to convince Charity to trust Marisol’s prophecy. It’s time to free Angela and trap the beast.

Harry and Charity hold the demon down while The Charmed Ones begin the spell. That pep talk that Parker gave Maggie is resonating with her, and she uses it on Angela, reaching her soul through telepathy and telling her to fight the Harbinger.

During the exorcism, Trip finds them with Angela tied up. Charity handles him by banishing his gun and grabbing a paint can to catch the Harbinger once it is released. The spell works. Angela is free. The Harbinger is captured. Trip is hit by debris and dies. 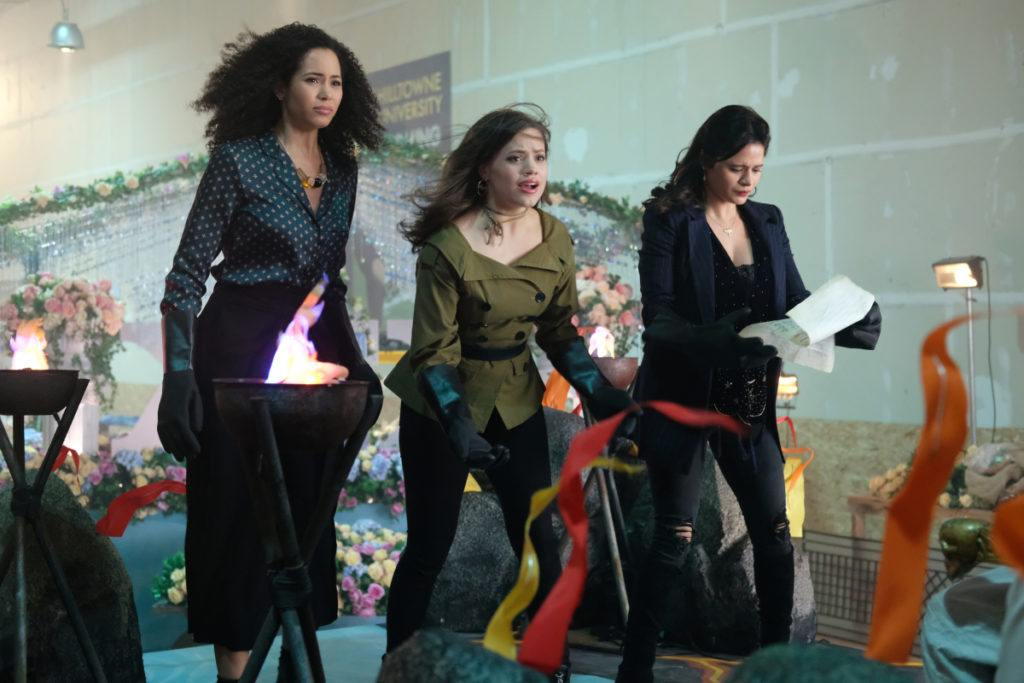 Magical Olivia Pope, aka Charity, assures Mel that she’s handled it. Trip’s death won’t cause any alarm or suspicion toward the sisters. Mel feels awful. Trying to save one person has killed another. Trip wasn’t just any cop…he was Niko’s partner.

The next day, Mel realizes that things weren’t handled…they were made worse. When Niko comes to see Mel, she tells her that Trip hung himself at the warehouse and is being accused of the Halloween killings. That isn’t even the worst thing to happen. Charity’s elder ass gets charmed on an elevator at “work” and ends up giving away the damn Harbinger. Your power suit ain’t all that damn powerful, girl. Now, WTF?