Fresh off an outstanding SNL performance, Donald Glover aka Childish Gambino has released his first video in a hot minute and it is brazen, unapologetic fire. Childish strides, dances and murders his way through a warehouse while rapping about, hinting at and alluding to the current state of America. At least that’s what it looks like on the surface. The tip of the iceberg, if you will. Allow Frantz and I unpack and explain.

Frantz: If you unfold the trauma and stupidity of what Kanye has said in the last month about Blackness in the Americas, you’d might see the tip of the iceberg of what “This Is America” brings to the table.

Off the bat, the guns come out quick – ‘cause this is ‘Murica: where gats got more rights than women for some reason. Director Hiro Murai and Donald Glover have created spellbinding collaborations before: Episodes of Atlanta plus the video for Gambino’s “Sober”, so we already knew this was gonna be fire. I didn’t see this coming.

There are these brilliant moments of juxtaposition; the straight up swag of Gambino getting it with the young people seconds after blasting a detained Black man through the dome. It’s doing the newest of social dances with the kids while someone jumps to their death in the background. It’s the beauty of a Black gospel choir and the horror of seeing them gunned down (after just hearing one of the Birmingham church bombers are up for parole). It’s the face changes; from trap ad-libs and black joy set so close to the blinding fear of being chased by your own country.

Important to mention: Every single time a gun shows up in this video, it is alongside the phrase, ‘This Is America’.

The visuals for “This Is America” is the thesis of right now: America as the post-modern, pseudo-post-racial wasteland of broken ideologies.

Ja-Quan: Bast, thank Frantz for that eloquent breakdown and phenomenal perspective. Off the rip, Childish is shirtless the entire video. Do you know how much bravado it takes to be one of the brightest minds in black entertainment and come for so many white viewers in this fashion? Do you know how a shirtless black man with 2 gold chainz on is perceived in Trump’s America? You better ask somebody, cuz I ain’t got the time.

Lyrically, we could spend days discussing each line, undertone and every implication possible. He drops poppin’ buzzwords (a whole verse where he says party 8x), and lit terms (get the bag, fitted, Gucci) used to draw you in as he cuts a rug with the dancers before another tragedy happens, only to be forgotten seconds later, cuz lit terms and dances. The cycle of violence and media coverage in our land of freedom.

Frantz touched on it earlier, but we really can’t find enough time to talk about the power behind that chorus and the lines that follow. ‘This is America, Don’t catch you slippin’ up, Don’t catch you slippin’ up, Look what I’m whippin’ up.’ At the same time that black men have to ensure that they’re not slippin’ up, they are simultaneously trying to stunt on ayebody. This the duality of life for us. I love the way Childish uses the term “Look what I’m whippin’ up” because everyone envisions their own version of fly shit. Some whip up more cash, some whip crack in a pyrex, some roll up in their new whip with the spinners on em cuz they’re still living in 2002. Ahh, happier times.

Gambino also makes sure to say “Don’t catch you slippin’ up” twice every single time. The fear of being gunned down by cops for living while black exists in the mind of every brother who has ever worn a hoodie, hung out in his yard, or watched the news, and he wants you to remember that.

After this season of Atlanta and this video right here, Donald Glover is officially untethered. “This is America” is sure to make some noise, so we keep our ears to the streets and see how the rest of the country reacts. Catch us on Twitter while it all unfolds. 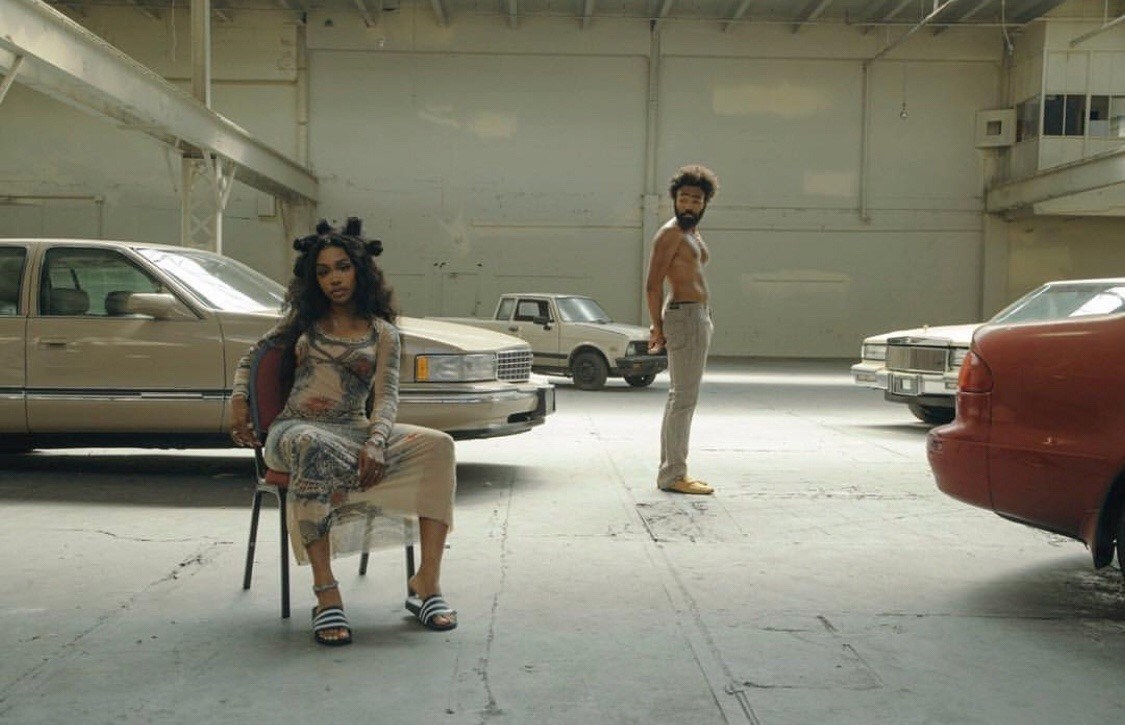