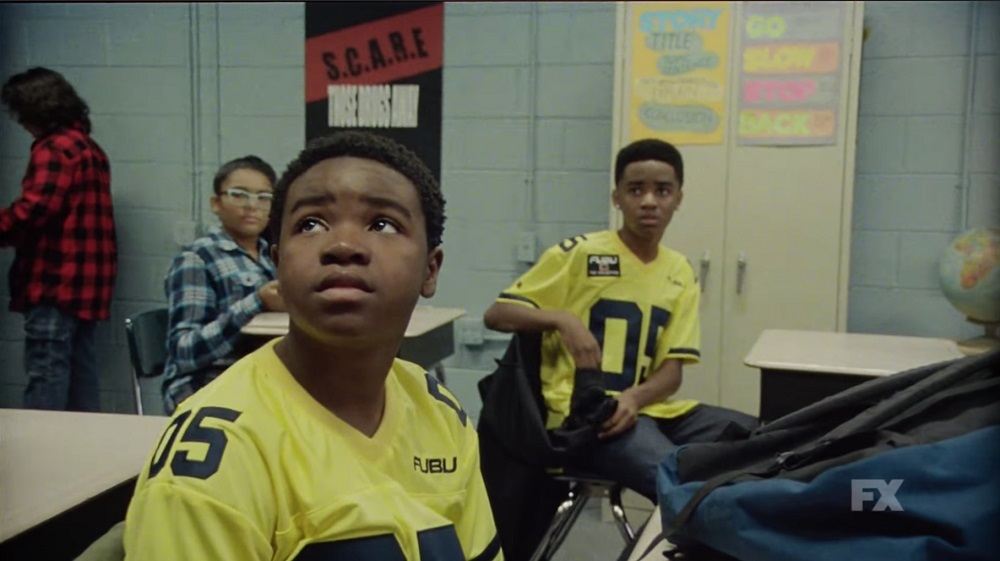 ***Atlanta is back for season two — ROBBIN’ SEASON — and we couldn’t be more excited. While not a traditional recap for us, Nicole and William get together each week to talk about the great, the innovative, and the utterly bizarre of the latest episode. All the spoilers ahead.***

Nicole: Earn has been taking the same L his whole life.

William: His entire, f*ing life. I mean, that was the speculation, but this episode basically confirms it. Which I guess explains why he tries to win seemingly unwinnable situations. My assumption is that he feels every situation is basically unwinnable, so what’s the difference.

Nicole: He’s become such a tragic character to me this season.

William: For me, tragic? Yes. Sympathetic, not as much.

Nicole: This episode basically cemented that for me. And made me so much more curious about how his college ended.
I’m much more sympathetic towards him after this episode than I was after last week’s bul… you know what? I don’t even want to talk about last week. 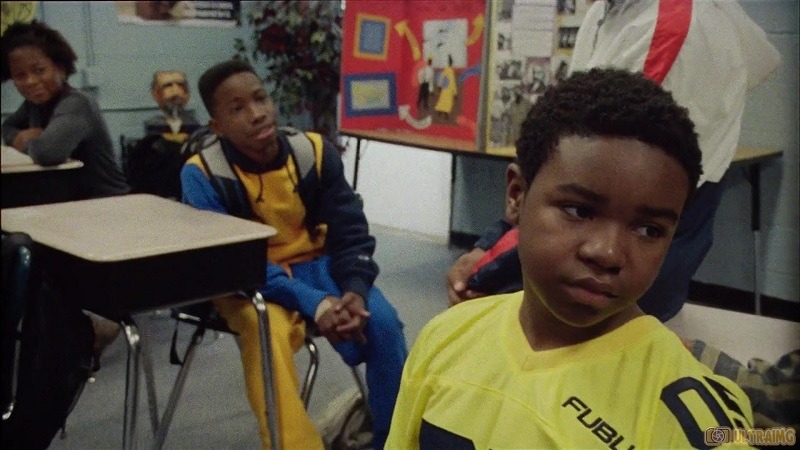 Little dude just wants to be cool because he understands what it is as a commodity. Clothing as a vehicle is cast very specifically as racialized in this episode. This is not a kids will be kids thing.

William: Right, and as relatable as the clothes, cool kids thread is, its still an Earn issue. There’s 10+ boys in that class that aren’t trying to rock FUBU to impress someone (at least in this episode). Besides his double, everyone else in his class is distinguished by strength of personality, for how good or bad that casts them. But at an age where no one truly knows who they are yet, so everything is a sort of artifice, Earn is still trying to elevate his station beyond how he’s perceived.

Nicole: I’m gonna disagree with you there because when the strength of character you refer to is ridiculing someone’s shirt because two people happened to wear it on the same day there is no distinction. Both people/groups of people are trying to elevate their status. Their methods are simply different.

Body-shaming a substitute teacher, roasting kids because of their clothes, and being the resident expert on fashion are all societally-approved ways of elevating status. I’m not sure why your disdain is focused solely on Earn.

William: But that would intone that if Earn could choose to be socially lauded for his wit and conversation, even if it were demeaning someone else or be recognized for his cool clothing, that he would “nobly” choose the clothing. I’m not saying he’s worse than the other, cruel kids, I’m just saying that having watched Earn for two seasons, if he could be part of that crew, insulting people to achievement that social standing, I have a hard time thinking he wouldn’t.

Nicole: I think he’d stand by while it happened, and I think that’s worse…Not out of nobility, but out of his hyper-awareness of his fragile and unstable social standing.

William: I think we’ll both agree that bigger tragedies happen in this episode than Earn’s interrogation of how real his FUBU was. Some of which is just straight heartbreaking

Nicole: This episode was, like all of them, dense. Can you specify the tragedy?

William: Well, there’s a ton of social cues packed into this episode right. We’ve covered the weird social status attached to money that none of them control (Erica don’t like broke n*gg*s made me gafaw, even if it’s accurate). The white teacher in an all black classroom. The relentless bullying in every form. But the three that stick out to me the most are the boy who got punched on the bus after throwing the yogurt out the window, of course Devin’s suicide, and then, just – everything with Denisha. I think I could see Devin coming, but Denisha truly broke my heart. 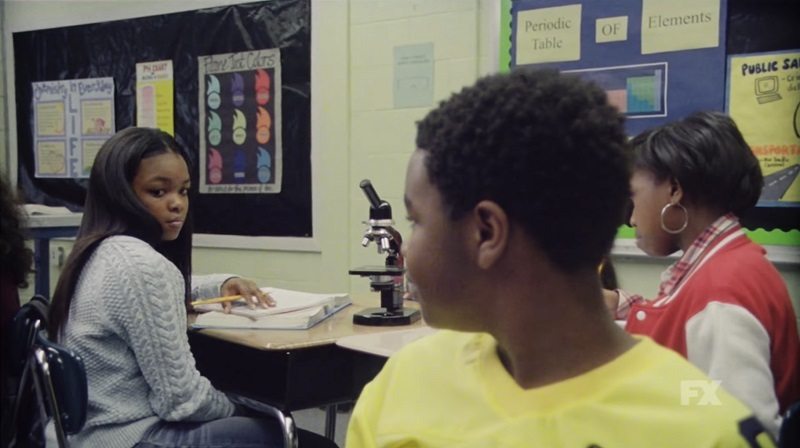 Nicole: Why the boy on the bus?

William: I think the boy on the bus gets the point of not throwing shit out the window when someone says, yo, don’t throw your shit out the window, that shit hit me. He wasn’t exactly like, “yeah, I threw it, deal with it, he was mad apologetic. But he got his head punched against the window, after he got ratted out, while everyone watched. Minor tragedy sure, but not how you want to start your school day.

Nicole: He’s exposition and a warning. Tragic, yes, but necessary as we needed to know the stakes.

If we look at him in conversation with Alfred’s later principal office visit (and Earn’s stuff), he seems like a there but for the grace of God moment; we have a few of those in this episode. Alfred also calls out snitches but avoids punishment because of his confidence, which he later tries to get Earn to mimic. It seems like the bus yogurt kid might have fared differently if he had been like “Deal with it.”

Or maybe [thinks back to last week’s fiasco], the beating would’ve just been worse. But either way, he likely wouldn’t have ridden the rest of the way to school with his hood covering his face.

William: Did you see Devin coming?

Nicole: His suicide? Not until the principal walked in and then, before he opened his mouth, I knew. But afterwards, when I’m replaying dialogue, his saying “My dad doesn’t buy me fake stuff” takes on a heavier emotional weight. Does he believe Alfred’s lie? Is it the teasing or is it the symbol of his father’s love being proven a facsimile?

William: For an end that tragic, it could be both. But I’d have to assume he already had an idea about his father beforehand, and this was a solidification.

Nicole: We can’t talk about the end without returning to Earn. That sister moment at the table is what got me. Alfred who (I think) lied on Devin about his shirt, and Earn (who he lied for and who watched it go down without saying a word) listened to their mothers tell them how important it is for Earn, and by extension Alfred (who earlier sports a uniform), as a Black man to be well dressed. Meanwhile, lanky white friend has worn the same shirt to school twice that week, and no one cared. 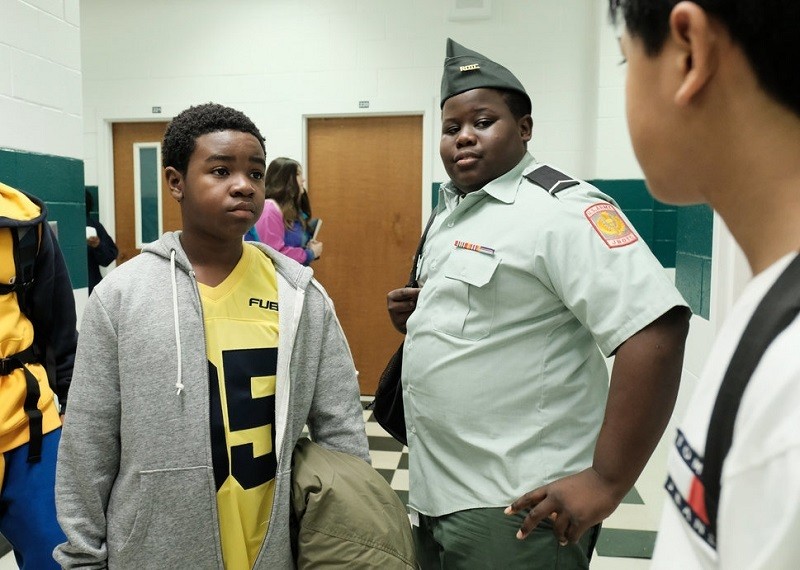 This is a bout middle school, but it’s also about what we pass down to our kids and how that gets distorted–so distorted that we don’t see our own hands in it.

William: Right, the ending was crushing because it was a reaffirmation of the issues that plagued them (well, Earn especially) in school. I can’t really tell if I’m just really sensitive to what happened to Denisha, or if you found her two appearances heartbreaking as well. My feeling was that, whether it be a bad day or she has some mental health concerns, the fact that she’s a young Black girl may mean the resources to diagnose that and then aid her may never become available.

Nicole: I was effected. And because the writers did the thing I love/hate and didn’t give her a back story, I filled it in with a story. The teacher’s speech about Devon was about her, too; we don’t ever know what is going on with someone.

William: Anything else stick with you this episode?

Nicole: Just that idea of “simpler times” has always been bullshit.