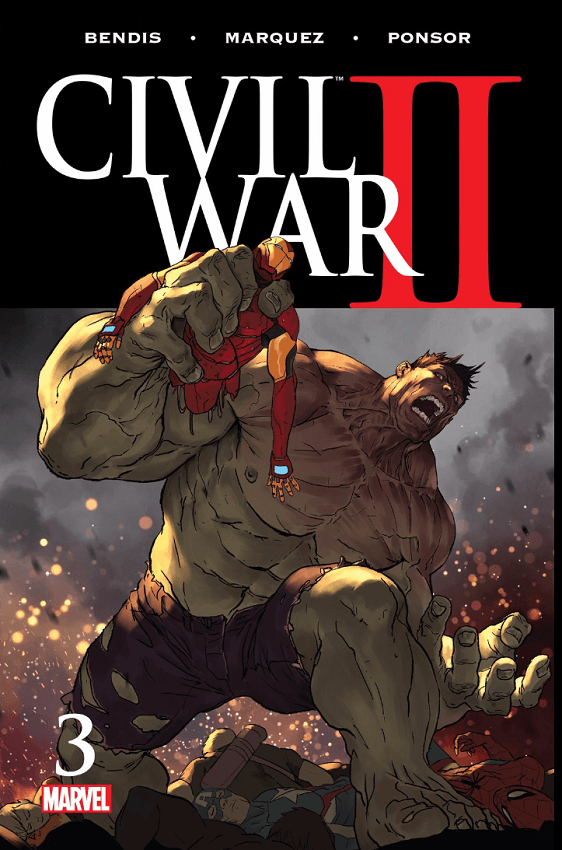 It’s hard, 3 issues deep, to not compare this iteration of Civil War to the original crossover event, whether that’s fair or not. The pacing is much slower this time around, considering that by the end of issue #2 in the original series, Captain America was on the run and the sides we’re drawn. You have some people gravitating towards camps by the end of this issue, but the only sides taken are the leaders: Iron Man and Captain Marvel. And even they are working together in some capacity at this point in the story.

It’s hard to review this specific issue without spoilers because it all centers around one huge spoiler, but it’s fair to say that the vision that all the heroes experienced of The Hulk in issue #2 has a pretty substantial fallout in the current issue. A court drama unfolds, so you know, this shit ain’t good as another hero has fallen and someone is being held accountable for it. I guess my issue with this book, or at least at this stage of the book, is that while a hero being killed is a huge thing, as far as the Civil War part of this book, ya know, for which it is named, nothing really happens. Carol and Tony are on opposite sides of this and the latest situation only drives them further apart, but we knew where they stood already. A couple of heroes muttering “I’m with so and so” has about as much enthusiasm as the #GirlIGuessImWithHer campaign for reluctant Hillary Clinton voters. 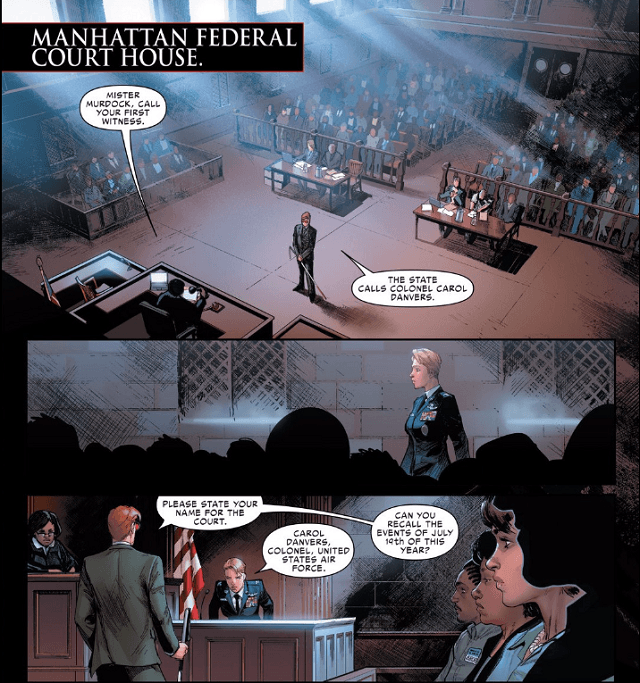 So this big cosmic event that claims another hero doesn’t have a galvanizing effect and therefore doesn’t accomplish all that much to further the story from a character perspective. I saw some hype being generated before this issue dropped of “one of these Avengers will be killed in issue #3,” but I think it misses the mark. I don’t think the big interesting thing about Civil War is which heroes die. I think the battles, how the heroes counter each other, who defects, what hero surprises and rises up, what the role of the villains play are all much more interesting. I’m sure much of that is coming since we have four issues left. But we could definitely use more of that and soon. 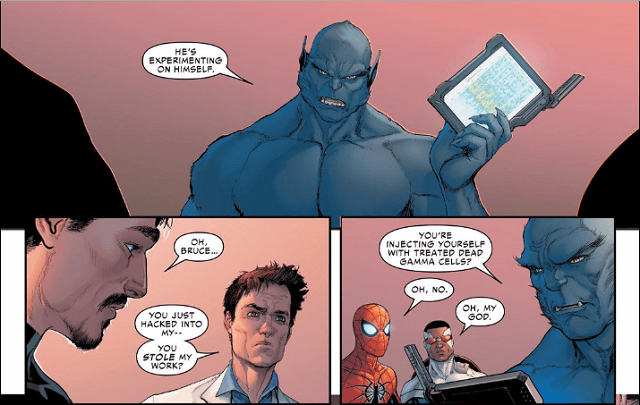 The book does look pretty damn good though. Marquez (aided by Olivier Coipel) can draw a compelling drama, both in the field and in the courtroom. Considering so little action happens in this issue, he still manages to give the book a good amount of energy from how he positions the characters and their reactions. The splash pages do what they’re supposed to and my favorite part of the issue was seeing the various reactions of heroes to the courtroom testimony via TV.

Civil War II started off with a bang (and some controversy) but has done some wonky things since. And not moved much. Here’s hoping the exposition phase is over (but judging by the last page, it doesn’t seem like it) and we can get into some hero on hero action moving forward.