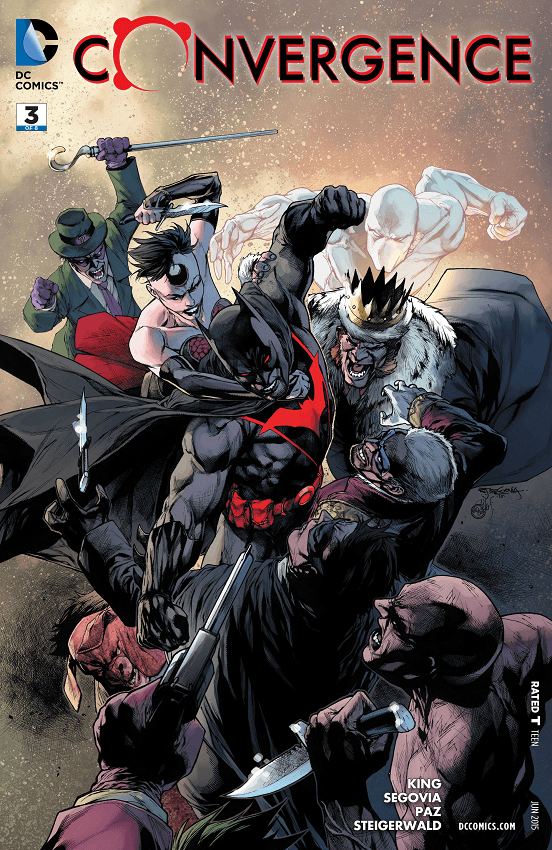 If it’s not one thing, it HAS to be another thing. That’s how DC’s crossover events go. For one thing to be awesome, something else has to suck. Full Metal Alchemist, Edward Elric, would call this “equivalent exchange,” I think. This year, DC is calling it “Convergence.” Now, for those of you who want to see the “past, present and future” versions of your favorite DC heroes beating the shit out of each other, your hero probably has their own individual tie-in. I’m telling you here and now: that’s probably the better option.

This week, we get a first hand look at what happens when a chosen city decided not to go with Telos’ program and destroy another city. Our “not quite Brainiac” villain is more obsessed with strangers beating each other to a meaty paste for his personal gain than UFC president Dana White. We also follow our Multiversal heroes a little more as they traverse this strange “Battleworld” (yes, I know that’s blatantly a Marvel thing but in light of DC wanting to be Marvel so badly, we might as well just call it a Battleworld). This is one of those events where it’s hard to blame the writers (except Scott Lobdell… because #1 blatantly read like Scott Lobdell) for the things that go wrong with an event like this. Given all the tie-ins and fanfare, you can the bus was already built and they just need a halfway competent driver. But fuck’s sake, there’s a lot wrong with this book. As a story, nothing really develops in Convergence. Things just happen. We’re given some small spark of hope for character development between Thomas Wayne Batman and Dick Grayson, but those dreams are dashed pretty quickly in trade for Batman having to remain hardcore. In fact, Grayson is so ineffectual in this book, he may as well have been Tony Stark’s little kid friend from Iron Man guarding the armor with a potato gun. 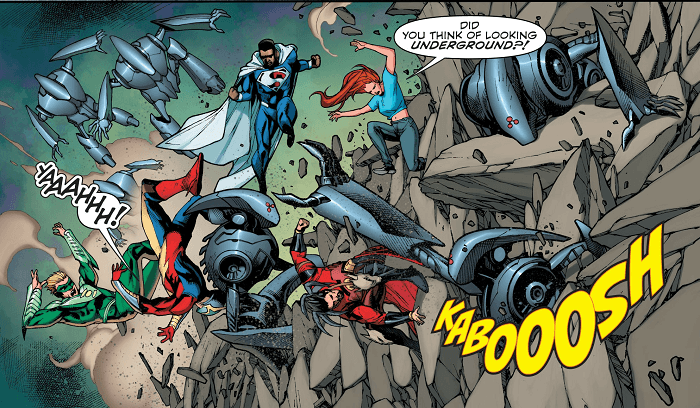 [divider type=”space_thin”]
And with all the firepower at Team Convergence’s disposal, Jeff King does a pretty awful job of convincing us that Val Zod Superman (my smarter, older brother) is actually having trouble dispatching rogue Amazon drones that just grab people and throw nets. Also, if Telos has the power to destroy an entire city in one deft move, why not just kill our heroes instead of wasting drones that don’t really seem to do anything? But hey, this is a comic book, so it should at least have it’s visuals to lean on, right? Nope, not remotely the case. Now, I don’t think Stephen Segovia is a bad artist, by any means. In fact, I think he would have drawn a perfectly clean book… if they’d let him finish it. So many panels in this issue feel roughly sketched and half-assed. Very few characters have convincing facial expressions and some of the perspectives are a bit oddly placed.

Bottom Line: I don’t even have a good punchline for it. This book sucks, but DC does these “kinda sorta reboots” every few years, so don’t worry. They’ll try again, soon. Who knows? It might even be good. 3.5 out of 10