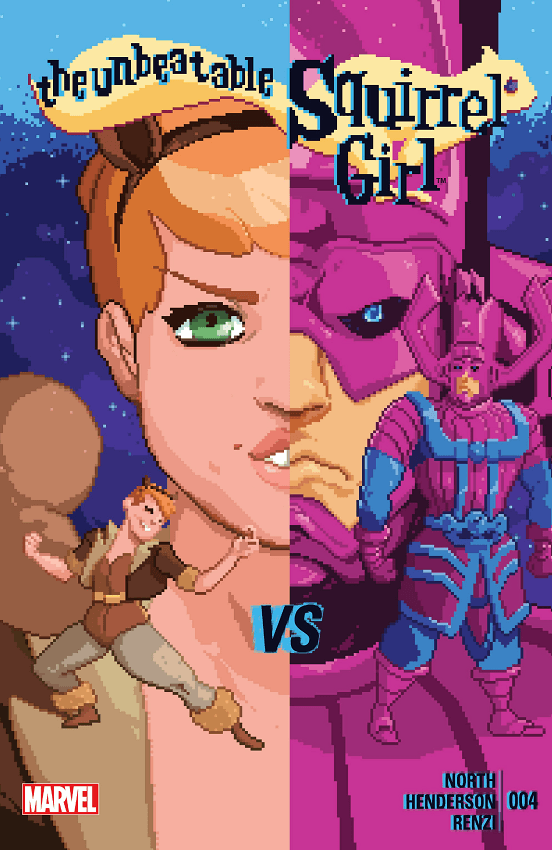 When is the last time you belly laughed while reading a comic book? Do you do it often? I don’t. I tend to like my pulls a little on the dark and twisted side, so I just don’t typically get a lot of comic book related guffaws on regular basis.

So we’ve been anticipating the showdown between SG and Galactus since the very first issue. In theory, we know how this plays out. She is the UNBEATABLE Squirrel Girl for a reason. I mean, it’s a given that she’ll emerge victorious. It’s the how that we’re interested in, and it’s the how that we’re seemingly robbed of on the first page. The book opens with a victorious SG atop a sprawled out Galactus.

After this page? The letter column pages.

Luckily SG decides to recap the “battle” with Tippy Toe  for our benefit, so all isn’t as lost as we thought. I’ll be brief in order to remain relatively spoiler free and simply say that this whole issue is hilarious. Some highlights?

Through wonderfully rich (and never condescending) writing by Ryan North, Squirrel Girl manages to be entertaining for both my 10 year old and myself.  I’m admittedly still on the fence about the Erica Henderson’s art; I think she did a wonderful job with the scale of our tiny shero vs. big ol’ Galactus but I still can’t get past how harsh and awkward Nancy Whitehead’s face is. Henderson is growing on me, though, and I don’t dislike her style enough to give the issue as a whole anything less than 4 out of 4 stars.