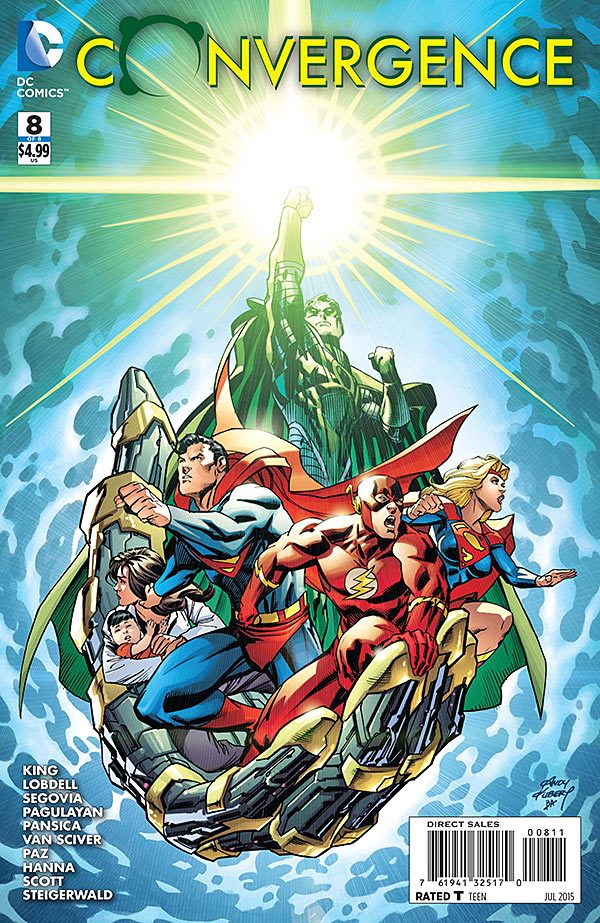 We’ve come to the end of the road in Convergence and it has been one roller coaster ride after another. Worlds have fought each other to survive and heroes have come together from different universes to face off against Deimos who was killed by Hal Jordan Parallax (MURDA MUSIC). Everyone is not too excited about that but we see some time travelers show up with the answer to everyone’s prayers… in the most unlikely person that anyone would have expected.

The conclusion of this major cross over event comes across as more empathetic than anything. Lobdell and King had their hands full encompassing so many different worlds and characters which is no small task at all. The end result isn’t one that will (imo) stand out or over shadow any of the past events (Infinite Crisis) or future ones to come. Segovia and Pagulayan worked well together for the art of the book, they really brought out the sci-fi in detail with the depiction of Parallax as well as other characters and page splashes of the multiverse.

I’m not going to compare Convergence to Marvel’s Secret Wars but I will say I’m not sure how the end result of Convergence changes anything for the future. This seems more like a multiverse team up that could have been done in 4 issues instead of 8 as there are no major revelations of change that will have lingering effects for the character or plot development.