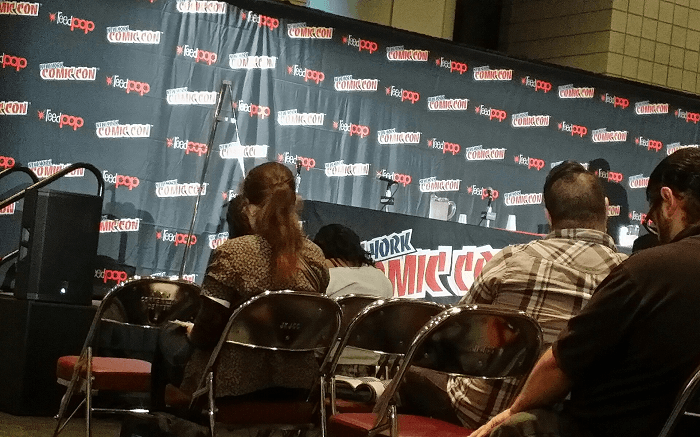 For a comic fan, attending a convention is a mass gathering of distant relatives – the one you play Titanfall with online, that guy whose reviews you browse online, that girl you haven’t seen since the last convention – all in one place. It’s a family reunion of sorts, and in the case of New York City Comic Con, it’s a big one. But for those of us who are artists, designers, writers, cosplayers, or any other type of creator, a convention is more than a fan space, it’s a networking opportunity for you to share your work. These are your future collaborators, guidance counselors, business partners, and consumers, so approaching a convention from that perspective means the difference between being a fan of someone else’s work, and being on track to add fans of your own.

Conventions are a self-marketing opportunity, networking gala, and career advisement seminar rolled in one. With everyone in the mindset of sharing and exploring new things, you don’t need to warm up the crowd to your presentation – everyone is there to see what you have. Not only are convention-goers willing to discover and discuss new things, they’re eager for it. It’s part of the joy that makes us nerds. If you designed a comic-themed jewelry line and you come to a convention without samples, not only are you slippin’, you’re also robbing people of the awesomeness you created.

Of course, there is the fear. Your story isn’t good enough, your art needs better shading, or your work just isn’t ready yet to be seen by the world. Your work isn’t complete. It’s also nonsense, and a hollow excuse. Who better to seek advice from than the same people who get your anime-themed tattoo, or share your laughter over Mercury’s useless bubbles? Where better to get art advice than Artist Alley? Some of the kindest, most fun-loving people I’ve ever met came from panel audiences at conventions, dressed like Aang and waiting an hour in line to watch advance screenings of Korra. Companies literally pay for such an opportunity, because the best focus group of story-fanatics, art-lovers, and character fans are right here at your fingertips. 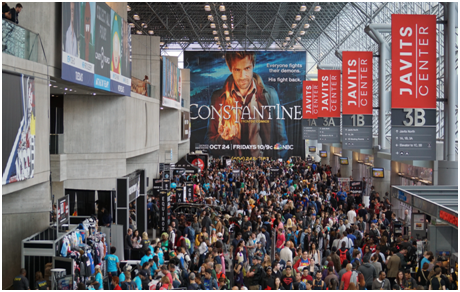 This past weekend at New York Comic Con I went to a Thursday panel on representation in media. The panelists were unlisted so the audience went in blind, and Brenden Fletcher, writer of DC’s new Gotham Academy, was added to the table. I wanted to meet him and maybe shake his hand after the panel so I stood side-stage after it ended, waiting as he talked with colleagues, walking the line between creepy, overbearing fan and a normal human being. After extending my hand and telling him I enjoyed the first issue of his series, I learned something about Brenden Fletcher: he is the most awesome dude you could meet.

Here I expected a quick brush-off or dismissive appreciation for my being a fan of his work, but I couldn’t be more wrong. Not only did he offer thoughtful advice and asked what I hope to do in comics, but he willingly had the conversation for about 45 minutes in a hallway. A random act of kindness on his part, but to me it was a reminder of the awesomeness of this community and the creators in it. He took the same time geeking out over Olive Silverlock and Kyle Mizoguchi as he did asking about me. 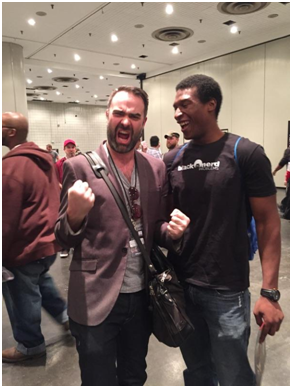 When I was in graduate school I absolutely hated networking events. They seemed painfully unnatural and contrived, as everyone rubbed shoulders in a thinly-veiled attempt to be considered for a job. My last networking event at NYU I remember going to the bathroom and sitting on a closed toilet seat, browsing my phone for as long as I could before my absence would be noticed. I had it down to a science – you can typically be gone for up to 7 minutes before people question where you are. It wasn’t until speaking with Brenden that I thought of conventions as a networking opportunity, only ones that I genuinely enjoyed. Comic conventions are the only networking event where my excitement is authentic, inspired not necessarily by landing a job, but by the need to be a better creator.

More than anything we want to share our work with others, and in this career path, your nerdiness is your resume. That is, your unabashed excitement over something wonderfully creative and a perspective that is all your own. There’s no better place to share your resume than a convention. It’s the best family reunion, so show us what you made.