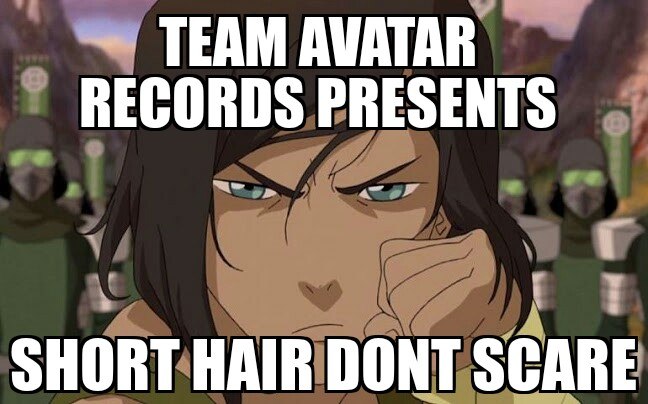 Ever since Legend of Korra dropped that Ether Book 3 trailer on us with no dialogue and just straight drums and beats, I’ve been thinking “wouldn’t it have been great to hear some of our favorite characters join in on the track?” It also raises the question who would we want to hear mixtapes or singles from & what would that look like?…

Don’t worry I got you. 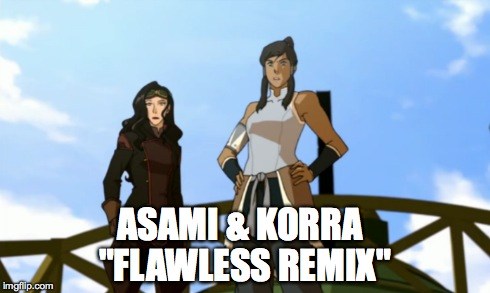 This one is just a given right here. Asami & Korra been putting it the fuck down for women (of color), empowerment, equality and just showing that they are capable human beings able to hold they own. We seeing two women punching a hole straight through the tempered glass ceiling and lets not even bring Jinora into the mix. Korra and Asami have got to be the Beyonce and Nikki Minaj powerhouses right now. We’d have to start the track with Katarra dropping her Chimamanda Ngozi Adichie speech before we cut to Korra going hard

Korra: My Daddy taught me how to blood-bend my haters,
Tenzin told me I should speak my mind,
Brava made me feel so god damn fine, 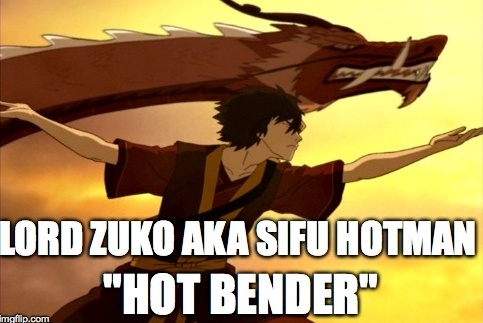 We see Zuko all grown up and proper now. He established and eating good but if we getting a track from Zuko? From The Fire Nation Scar Face himself? Then we need to take it back to the old days. Back when he ain’t have any Yuans to his name, you feel me? Back when my man was having that internal struggle shouting at GAWD to strike him down with lightning. That’s the Zuko we want giving us that Bobby Shmurda remix right. I can just hear him saying “Grimey benders thats who we are” while doing the equivalent of gun hand gestures but with fire bending all up in the fish lens camera Hype Williams style.

“And tell the fire nation, Zuko steaming yo
CAUGHT A DRAGON BOUT A WEEK AGOOOOOOOOOO
Fuck with us you know we bending yo”

Zuko already got a Shmoney dance as well 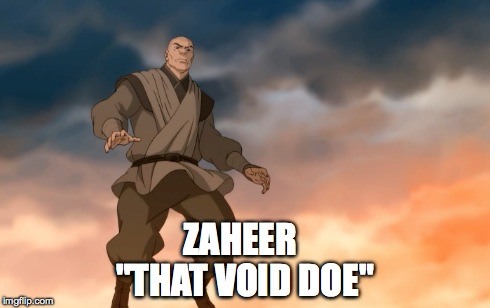 Who the hardest villains in the game? Zaheeer. Zaheer. Zaheer. Zaheer. and Zaheer. The man went and changed the way we say hello to the bad guy. I mean was he even really a bad guy tho? I mean her merk’d some folk but he was just believing that his belief that the natural order was chaos. I’m assuming he would have a conscious along the lines of Common with a track where he only goes hard every so often but for whatever reason I can see Zaheer going in on Childish Gambino’s “This way up” beat.

Yeah, Zaheer don’t go hard, What?
now everybody quoting Guru Laghima, Yup!
The Void be mad thick
Ya boy got untethered on his fly boy shit! 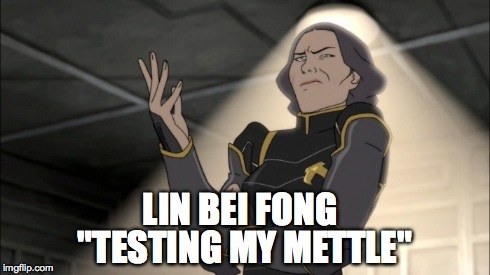 I mean what the fuck we talking tho. I think we can safely agree Lin Bei Fong can throw the cable up and swing in on any beat. Lin probably the hardest mofo in the game right now. Lin ain’t here to talk about feelings, she was holding more weight with her grudges than Atlas on his best day till the end of Book 3. We all know how Lin get when she upsets so best bet is in the booth she is bringing back that Marshall Mathers LP when the beat drops specifically “The way I am”. 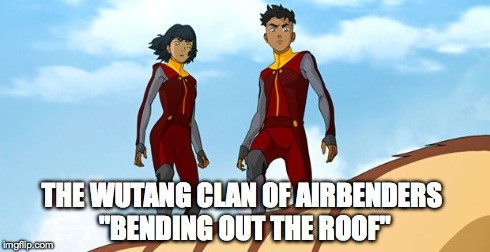 I had to give this one to the young guns this time around man. Kai came in on his grimy Jason Todd shit (he woulda stole the horns off Oogi if he could have) then turned the 180 degree angle and became an asset to the air nation. Opal went from church mouse quiet learning to speak up for herself to “we up in this shit now” and telling her boyfriend Bolin bout himself. These are two of the new faces of the newly thriving Air Nation who are the incarnation of Kendrick Lamar’s “The Jig is up”.

Kai: Y’all were too infatuated with our old extinction numbers
Opal: Which made it easy for the air nation to divide and conquer

“And now we air bending out the roof!” 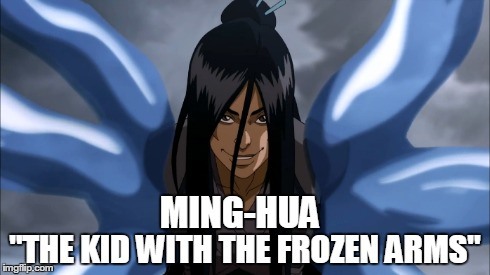 I gotta end it with quite possible one of the best to ever water bend it. Ming-Hua was given a disability and turned that shit into a god mode cheat. Ming-Hua is the beautiful mind genius of water benders. For real, she put the game below the wind chill permanently. Ming-Hua seems like a Jay-Z fan to me.

“I’m from the jail where the volcano could swallow’em, where Roku’ll follow’em,
and the White Lotus patrol that shit from top to bottom”