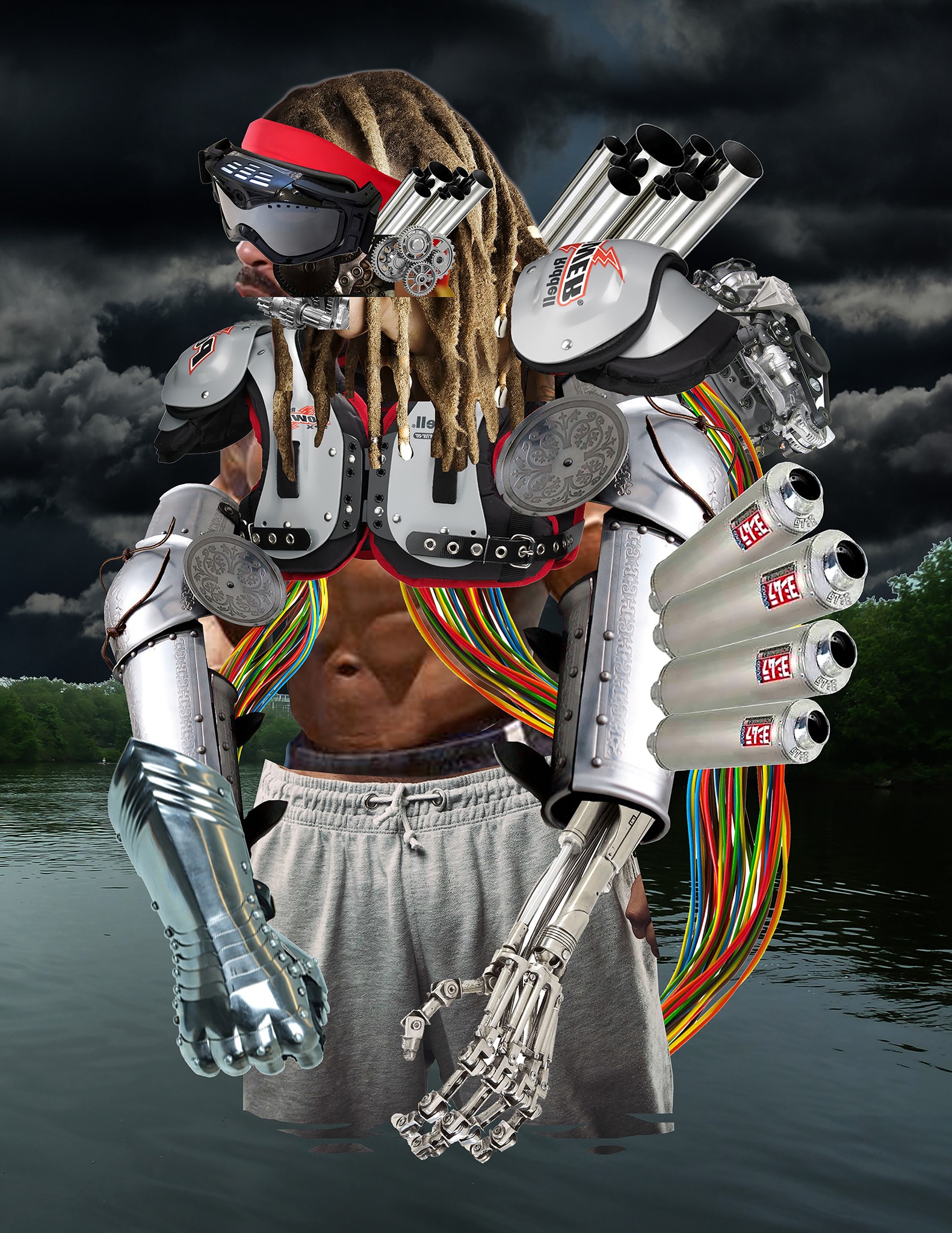 Depending on where you are in the world, your access to museums and galleries is severely impacted by corona regulations. Either your local museums/galleries are completely closed, you have to register in advance for a limited number of tickets, or your independent gallery is too small to actually open. Just as many film festivals, comic-cons, and larger industry gatherings, curators and galleries in the art world are also adapting to a world in which they may not be able to function as normal for an unforeseeable amount of time. Powered by Google Cultural Institute, a new Black arts exhibition emerges as a sign of the times – “Curating The End Of The World.”

In light of the postponement of New York Live Arts’(Live Arts) annual Live Ideas humanities festival of arts and ideas, originally scheduled to take place in May, the Live Arts launched the online exhibition co-presented with Black Speculative Arts Movement (BSAM) and curated by Reynaldo Anderson (co-curator of Live Ideas festival), Tiffany E. Barber, and Stacey Robinson. “Curating The End Of The World” is an Afrofuturist commentary on the end of the current age and “Cyclical Chaos,” interrogating the racist pathology and corruption that influences policy around the world. This multi-part exhibition looks at the global existential risks tied to ecology, climate change, anti-blackness, medical apartheid, and responses to the dystopian present. 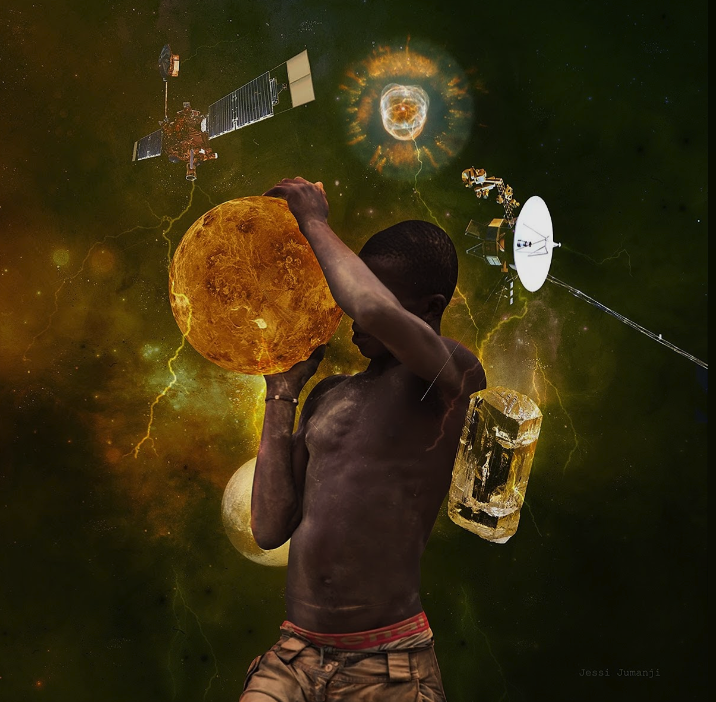 Looking ahead toward the next edition, the Live Arts’ 2020-21 season will offer five days of activity designed to explore second wave Afrofuturism as the groundwork for a future unfettered from the ideals of white Enlightenment universalism. Renowned author/curator Sheree Renée Thomas refers to this upcoming iteration as “Red Spring: Curating the End of the World.” In discussing the next event, she writes:

“In our first online exhibition, Curating the End of the World, we spoke out about the “cyclical chaos” surrounding black lives, black art, black futures.”

Thomas continues, “But out of chaos, comes clarity, renewed strength and vision. Red Spring explores the circular nature of systemic racism and the public policies—public safety, health, and wealth—that adversely impact black and indigenous communities. This work is remembrance and resurrection, resistance and restored hope in a social, economic, and political landscape of uprisings and upheaval, strange fruit buried in scorched earth. The artists and writers gathered here ask the essential questions that plague us all. What ancient and familiar new blossoms will spring up from the change the world demands now? What sacrifices and compromises will be made in the days ahead? Red Spring evokes the clarion call for dignity, equality, and justice of Claude McKay’s classic Red Summer poem, “If We Must Die.” It speaks to the temporal and systemic changes that must come to pass throughout the diaspora in order to birth futures where black lives truly matter.” 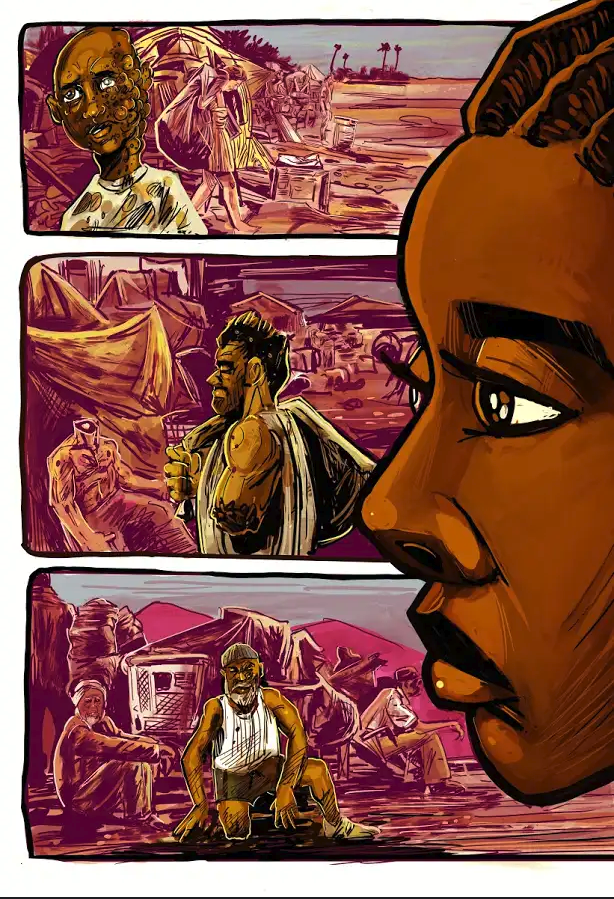 “Parable of the Shower” by Motherboxx Studios, 2020

For updates regarding the Call for Works for the next edition, along with ore artworks related to the current exhibition head to www.bsam-art.com and @bsamstl on Instagram.

The Black Speculative Arts Movement emerged in the wake of the “Unveiling Visions: Alchemy of The Black Imagination” exhibition curated by John Jennings and Reynaldo Anderson at the Schomburg library in New York, 2015. BSAM is a network of creatives, intellectuals, and artists representing different positions or basis of inquiry including: Afrofuturism, Astro Blackness, Afro-Surrealism, Ethno Gothic, Black Digital Humanities,
Black (Afro-future female or African Centered) Science Fiction, The Black Fantastic, Magical Realism, and The Esoteric. Although these positions may be incompatible, in some instances they overlap around the term speculative and design; and interact around the nexus of technology and ethics. BSAM L.L.C., founded by Reynaldo Anderson, is a year-long, traveling afrofuturism, comics, film, and art convention held at multiple universities, colleges, domestically and venues abroad.

Dr. Reynaldo Anderson currently serves as an Associate Professor of Communication at Harris-Stowe State University in St. Louis, Missouri and is an executive board member of the Missouri Arts Council. Reynaldo has earned several awards for leadership and teaching excellence and he is currently the Past Chair of the Black Caucus of the National Communication Association (NCA). Reynaldo has not only served as an executive board member of the Missouri Arts Council, he has previously served at an international level working for prison reform with C.U.R.E. International in
Douala, Cameroon, and as a development ambassador recently assisting in the completion of a library project for the Sekyere Afram Plains district in the country of Ghana. Reynaldo publishes extensively in the area of Afrofuturism, communication studies, and the African diaspora experience. Reynaldo is currently the executive director and co-founder of the Black Speculative Arts Movement (BSAM), a network of artists, curators, intellectuals and activists. Finally, he is the co-editor of the book Afrofuturism 2.0: The Rise of Astro-Blackness published by Lexington books, co-editor of “Cosmic Underground: A Grimoire of Black Speculative Discontent” published by Cedar Grove Publishing and The Black Speculative Art Movement: Black Futurity, Art+Design (Lexington books, 2019), as well as the co-editor of “Black Lives, Black Politics, Black Futures, ” a special issue of TOPIA: Canadian Journal of Cultural Studies.

Dr. Tiffany E. Barber is a scholar, curator, and critic of twentieth and twenty-first century visual art, new media, and performance. Her work focuses on artists of the black diaspora working in the United States and the broader Atlantic world. Her writing appears in Rhizomes, InVisible Culture: An Electronic Journal for Visual Culture, TOPIA: Canadian Journal of Cultural Studies, Black Camera, ASAP/Journal, Dance Research Journal, Afterimage: The Journal of Media Arts and Cultural Criticism, and various anthologies, exhibition catalogs, and online publications, including “Prospect.3: Notes for Now” (2014), “Afrofuturism 2.0: The Rise of Astroblackness” (2016), the “Black One Shot” series (2018), and “Suzanne Jackson: Five Decades” (2019). She is Assistant Professor of Africana Studies and Art History at the University of Delaware.

Visual artist Stacey Robinson, is an Assistant Professor of graphic design at the University of Illinois at Urbana- Champaign. As a Arthur A. Schomburg fellow, he completed his Masters of Fine Art at the University at Buffalo. He’s a 2019-2020 Nasir Jones Hip-Hop Fellow at Harvard University’s Hutchins Center for African & African-American Research at where he’s researching Hip-Hop’s multimodal performance practice as activism. His multimedia work discusses ideas of “Black Utopias” as decolonized spaces of peace by considering Black affluent, self-sustaining communities, Black protest movements, and the arts that document(ed) them. As part of the collaborative team “Black Kirby” with artist John Jennings, he creates graphic novels, gallery exhibitions, and lectures that deconstruct the work of comic book creator Jack Kirby to re-imagine resistance spaces inspired by Black diasporic cultures.

Sheree Renée Thomas creates art inspired by myth and folklore, natural science and conjure, and the genius culture created in the Mississippi Delta. She is the author of Nine Bar Blues: Stories from an Ancient Future (Third Man Books, May 2020), her first all fiction collection, and her work appears in The Big Book of Modern Fantasy edited by Ann and Jeff VanderMeer (Vintage Anchor, July 2020). She is also the author of two multigenre/hybrid collections, Sleeping Under the Tree of Life, longlisted for the 2016 Otherwise Award and Shotgun Lullabies (Aqueduct Press, 2011), described as a “revelatory work like Jean Toomer’s Cane.” A Cave Canem Fellow honored with residencies at the Millay Colony of the Arts, VCCA, Bread Loaf Environmental, Blue Mountain, and Art Omi / Ledig House, her work has appeared in numerous anthologies, journals, and other publications, including The New York Times. She edited the two-time World Fantasy Award-winning volumes, Dark Matter (2000, 2004), that first introduced W.E.B. Du Bois’s work as science fiction and was the first black author to be honored with the World Fantasy Award since its inception in 1975. She serves as the Associate Editor of Obsidian: Literature & Arts in the African Diaspora (Illinois State University, Normal). She lives in Memphis, Tennessee.