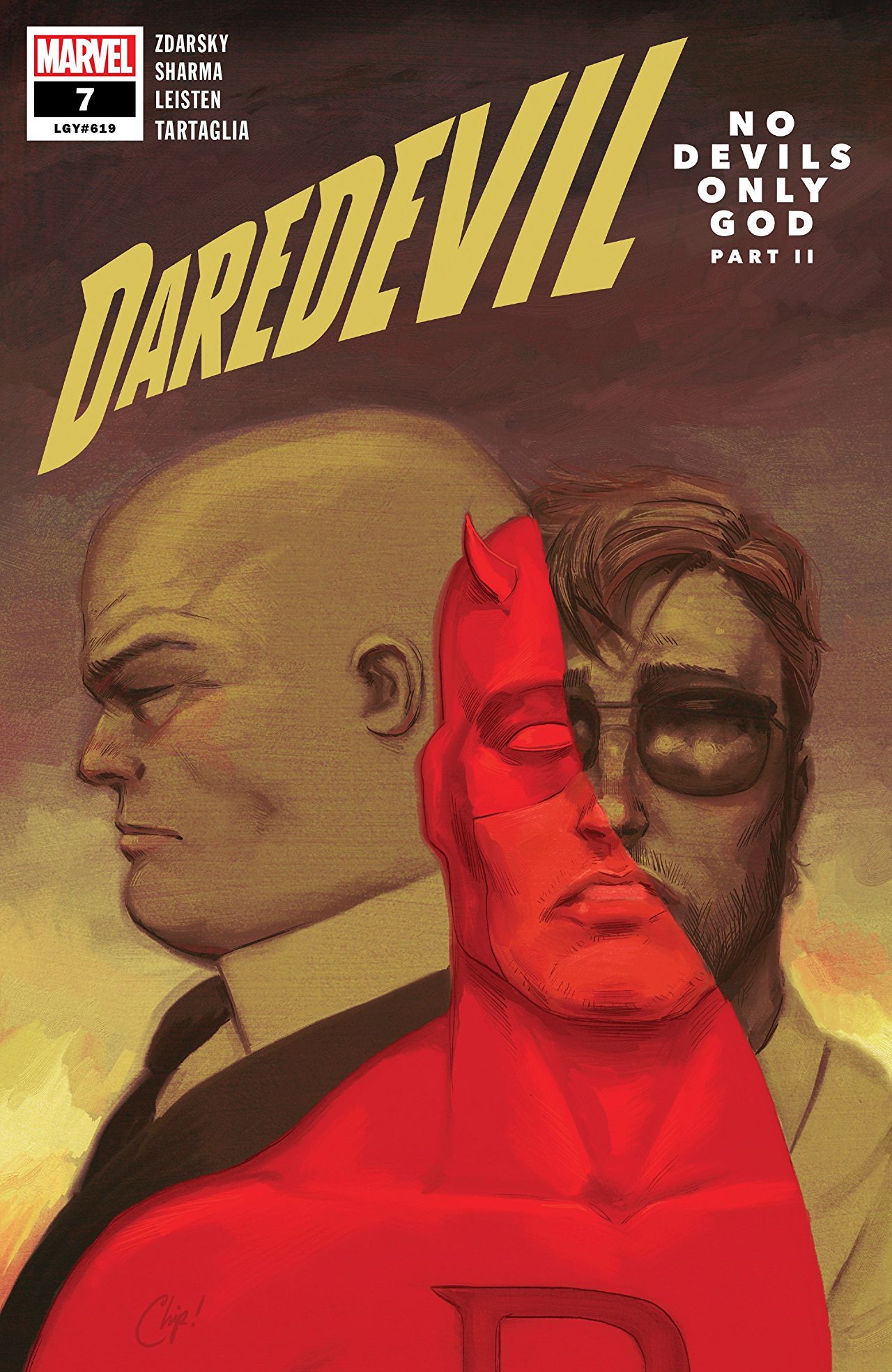 The lesson of the day is that even if everything else is on point bad art can just ruin a comic. Daredevil #7 came out this week with the second part of the “No Devil’s, Only God” story. Daredevil is done Daredevil-ing and our three major players are coping. Detective Cole is recovering from an attack at the hands of his fellow police officers that aren’t keen on his anti-superhero stance. Said attack ended with the officers’ death at the hands of the Owl’s hit men. They solemnly thanked Cole for getting rid of Daredevil. Lack of quality aside, the page of almost identical panels of Cole explaining the incident to another detective was striking. You get a sense of Cole’s inner turmoil trying to come to terms with the fact that is unyielding devotion to the rule of law is beneficial to the likes of the Owl and Mayor Fisk. 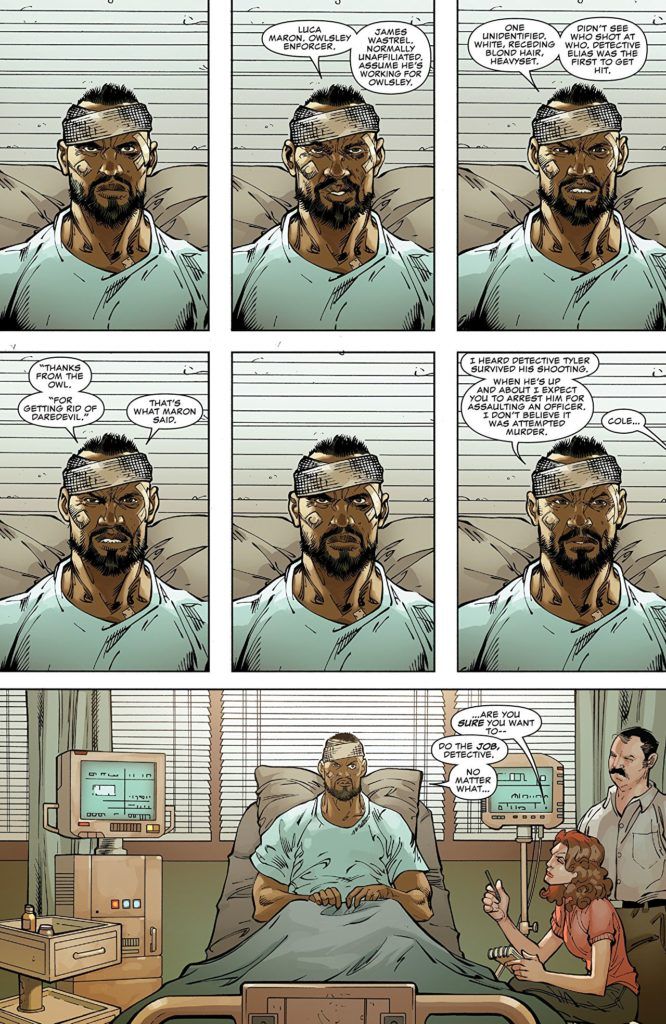 Fisk is dealing with a Daredevil-less New York in a calmer manner than last issue where he nearly kills an incarcerated man in a violent abuse of power out of frustration. This time he organizes the crime bosses of the city for a meeting in a bank vault. The group celebrates the profitable new norm since Kingpin became mayor. The police are literally under Fisk’s control, intra-criminal conflict is down and vigilantism is manageable. At the top of his game, Fisk announces that he “has won” and will retire from crime and just be mayor. There is a malaise in Fisk with losing the one person who seems to have gave his life’s passion. The contrast between Kingpin’s rage last issue and deadpan calm in this one is hauntingly beautiful.

He might get a chance to meet another Daredevil, though, as Zdarski gives us a little Black Girl Magic. The woman, Janet, who was last seen eyeing a Daredevil mask and a weapon during the harassment of her shopkeeper friend. It looks like the hero bug bit and Janet is seen thwarting a mugging. It was one of the most interesting fights I’ve seen in a comic. A couple attacks two joggers and they are fighting back when Janet joins in to help. It turns into a 3 on 2 fight ending with our new hero and her allies victorious. 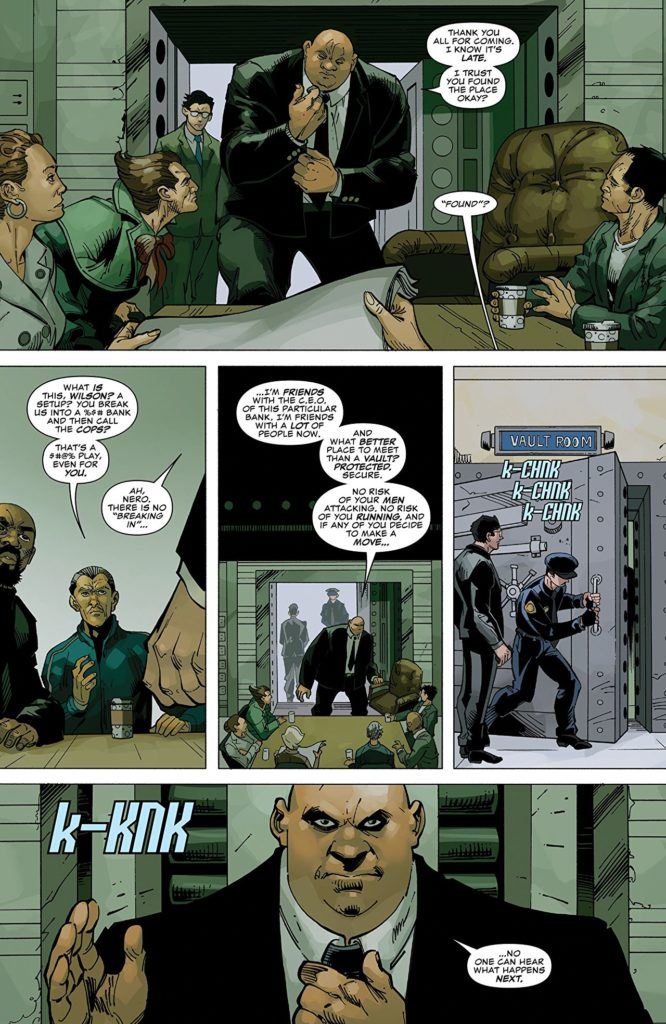 The real Daredevil is in a dark place. After being on high, enjoying civilian life, he finds out a parolee he’s responsible for is related to the thief he murdered. He has a legit panic attack and goes to his church for some guidance. A nun consoles him hilariously with the kind words, “You’re not special”. Her take on God and forgiveness was beautiful and warm enough even to melt my godless heathen heart.
All in all, the story Zdarsky is telling continues to be impressive. Daredevil, Kingpin, Detective Cole and now Janet all have compelling stories that I can’t wait to see intersect.