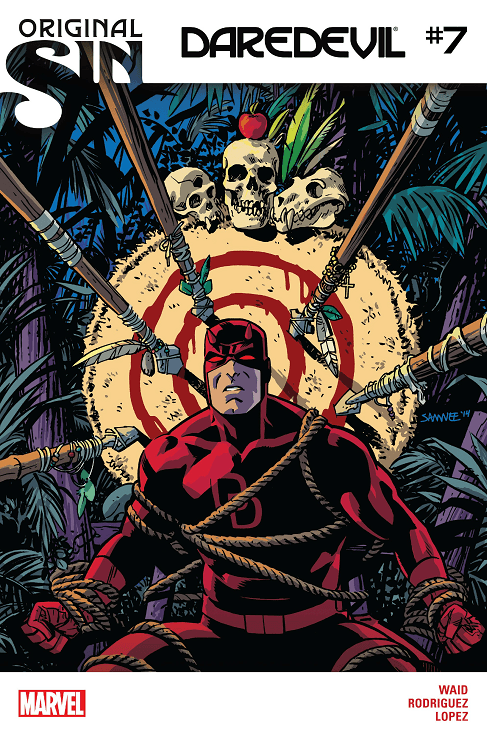 (I just want it on record I disagreed with the depiction of Wakanda as well as The Black Panther Bae Shuri in this issue but i’ma try to keep it neutral and diplomatic for yall).

Matt Murdock is on his shit again, this time jumping into the wilds of Wakanda to rescue his moms. Now, when I say jumping in, I’m talking straight Rambo shit folks.


Now mind you Matt is trespassing on some straight old school British colonialism right now but he explains that the Panther he knew (t’challa) wasn’t in play anymore and Shuri who is in charge aint trying to hear America at the dinner table right now.

It doesn’t take long for Matt to get surrounded but he figures he can handle a few spears and blow darts ( pause for a minute… Matt smart as fuck and knows damn well Wakanda the most technologically advanced Nation in the game. Yet he talking about they only packing spears and blow darts? Really Marvel? Really Mark Waid & Javier Rodriguez? Wakanda held the Skrull invasion the fuck off and piled them body bags but we still giving the stereotypes of how we depict African nations in modern day? Maybe they could have at least up to date heavy artillery in 2014 even if they WERENT the most advanced nation in the Marvel universe… but i’m digressing (but i ain’t sorry)) until a spear transforms into some boomerang new age metal shit and gives Daredevil that electroshock therapy for the soul on top of the sound device they brought out to nullify his radar. (good. Shouldnt have been talkin that sheeeeeeeeeeeeeeeeit on they arsenal Matt)

Shuri knew what time it was tho as DD wanted to be caught and brought in, what happens next is some fighting that gets settled down as DD gets his lawyer on to free the nuns (Matt’s mom being one of them) that were taken (for exposing some shady shit wakanda was doing), DD drops that ace in the hole which will bring some heat down on Wakanda that Shuri ain’t trying to have right now. the issue then takes route on DD’s mom explaining what drove her to leave. We get a tale of postpartum depression and how that took a toll on her which Matt’s father never blamed her for and kept that from Matt.

This was a pretty good issue. If you’e read Daredevil: Born again (which came back out in 85) you know more of the story of Matt’s mom being a nun then finding him when he was at his worst. This is a story that finally brings that section of DD’s parental life full circle and answers a question we been pondering about since way back.