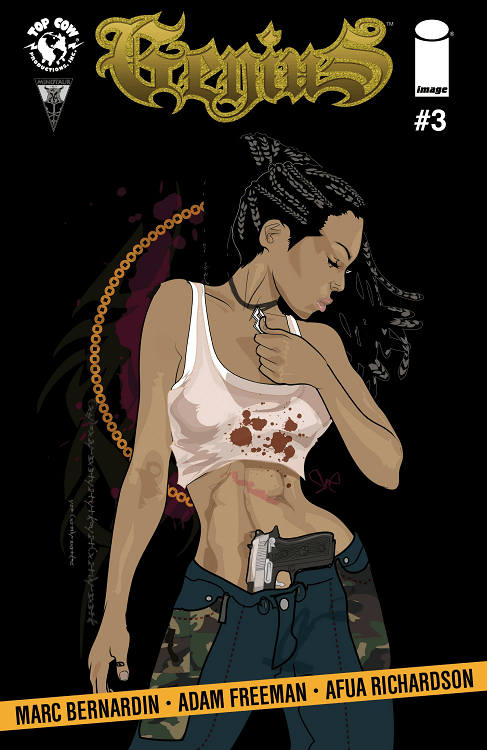 Genius #3 was the best effort to me thus far, though, it’s still far from perfect. The momentum of the story steps back as Destiny has to defuse a possible munity from some of her soldiers that don’t see her big picture. The party that ensues afterward is mentioned multiple times as the awkwardness of it does comes from the sharp contrast of bodies still littering their streets. It is dealt with well enough in its explanation and as the backdrop for numerous conversations. The biggest issue I have with this comic is that the characters outside of Destiny and Detective Gray are pretty one dimensional and woefully uninteresting. As this seems to be setting up a chess match between the two, that could probably be somewhat overlooked, but I’m finding Destiny to be pretty robotic as well. As I’ve stated in early reviews, she’s all General, all the time. It’s possible that some of the brief flashback moments attempt to humanize her, but they don’t carry nearly enough emotional weight for her to be as compelling as she could be.

Per usual, I think the art works so well in this book, especially since there are some quieter moments here and there where there isn’t an abundance of dialogue to distract from some of the work Richardson is doing. I do wish there was a little more imagination in the writing that would allow her to stretch a bit more.

I know I’ve been tough on this book, but I also think that in the absence of something great happening, the flaws and mediocre aspects might begin to overcome the whole. The art is again on point and this part of the story I enjoyed most so far, but there are still things holding this back from being really, really good.