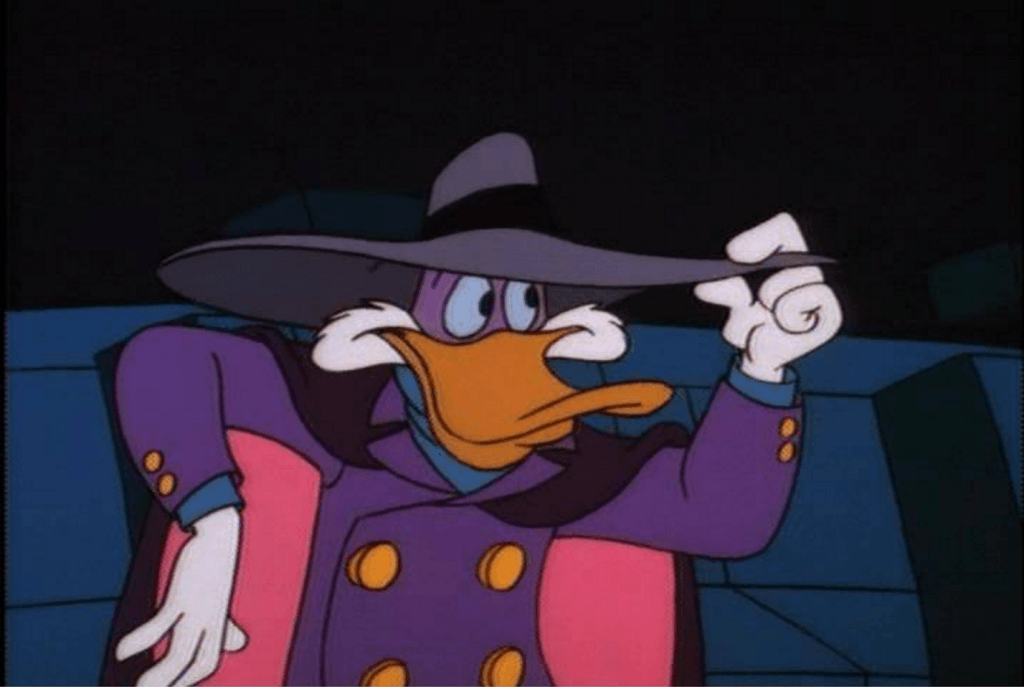 I am the writer who types in the night. I am the Speedwagon to your Joestar. I am living in the past! Ahem, sorry that isn’t my name, but it is an accurate representation of my current state of mind. Darkwing Duck is in my top 3 animated cartoon shows of all time and it might even be number one if I give it some more thought.

Darkwing Duck was Disney’s first true satire show; it was a show that had its foundation based on a parody of old spy and golden age heroes from television: The Green Hornet, The Shadow, Batman (terror that flaps in the night, you get it) and many more. It ran for 3 seasons technically, but most of the episodes were never aired. The show was full of comedy, action, morality, and surprisingly sharp jokes, including breaking the 4th wall. It also had the most kick ass after school jam theme song ever and I’ll fight anyone who says otherwise. Well maybe not anyone, like I wouldn’t fight Dwayne the Rock Johnson, you know. (Editor’s note: None of us in the Editing Room would want to catch that L either.) 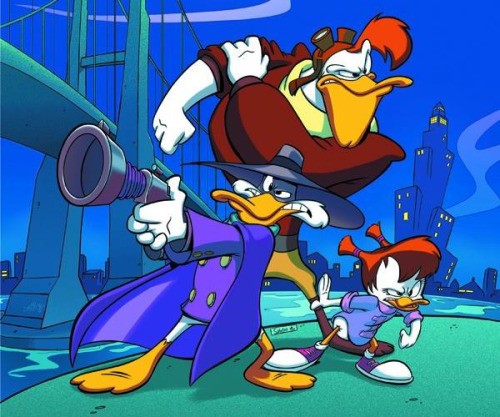 So what made this show so great? The characters were a major factor. The show introduced us to Drake Mallard (whose name is a parody of Kent Allard, who is the alter ego of the Shadow) who is a normal everyday duck by day and the crime fighting Darkwing Duck by night. It also introduces Launchpad McQuack who jumped ship from Ducktales and Gosalyn who is adopted by Darkwing and lives with him. The show quickly branches out into the ducktastic universe with its villains and allies.

Superhero teams and Villain teams are made with each side composed of distinctive characters with their own personal agendas. Negaduck (basically bizarro Darkwing) is the villain with the most ruthless and personal mission to destroy Darkwing and take over the city of St. Cannard… whichever comes first. He was basically one of Disney’s most ruthless villains who enjoyed torturing people and using guns, swords, flamethrowers, weed-wackers, and whatever else he could get his hands on. He was such a great villian, period.

Not only were the characters great, but the actual stories of the characters were equally as amazing. Let’s take Morgana McCawber, a sorceress who (hilariously) usually forgets what spell to use in the right situation. Look at her character a little more closely: she starts out as a villain who hypnotizes the citizens of St. Cannard to steal for her so she can pay off her student loans. She also steals pizza toppings to try to take over the pizza industry. She realizes that she doesn’t really want to hurt anyone and with Darkwing’s help she turns over a new leaf and even becomes his girlfriend. She was a well loved character with a lot of quirks and multiple episodes that featured her to help flesh out her out.

Gizmoduck, another character from Ducktales, is a duck who has superpowers (sort of) because of his Gizmo suit. Darkwing can’t stand him because whenever they team up Gizmoduck hogs all the glory. Their relationship is a parody of Batman and Superman. Darkwing and Gizmo eventually grow to respect each other and appreciate each other’s strengths and weaknesses. I could go on and on about every single character and their quirks but just trust that the characters in this show are all great. 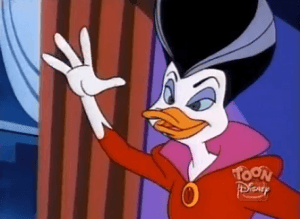 Before I move on from the characters, there’s one character, my favorite character that I want to touch bases on more: none other than the terror that flaps in the night himself, Darkwing Duck! So Darkwing is a super cool crime fighter, but when he was younger he was a dork and was picked on in school. He always had dreams of being a superhero and eventually he achieved those dreams and became just that. It isn’t specified how long DW has been fighting crime but we can assume for a good while with how well known he is. As the series goes on we learn about Darkwing’s self-esteem issues and his fear of not having anyone to keep him grounded. (Character Development!)

In his early years of fighting crime, Darkwing only cared about making headlines and not about actually stopping crime. Eventually he learned that being known isn’t the most important thing and that his showboating was just a way for him to get past his loneliness. After he befriends Launchpad and adopts Gosalyn he learns to cherish them as friends and family. He’s still the super cool showboat but has matured some and now when he comes home he knows he’ll have someone waiting for him. Darkwing is an amazing character full of his own personal ups and downs. Watching him develop in a show like this is a thing of beauty. In contrast Negaduck just wants to shotgun cute little bunnies to death. 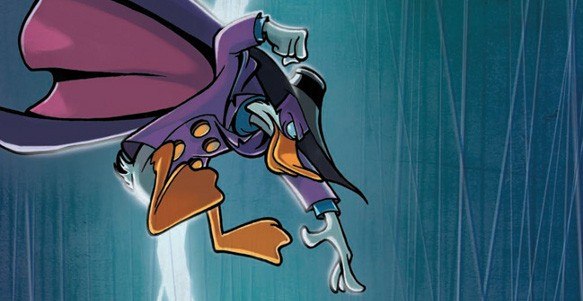 Because of all of these characters with their different personalities and agendas, team up episodes are always something to look forward to. Darkwing Duck was one of the first shows that made me excited to see certain characters interact with each other. After building up their personalities, the show crafts stories that will require them to work together which creates a plethora of great moments. No character is like the last and the show does its best to point that out to the viewers.

While Darkwing Duck has many ups, it also has a few downs. The show is inconsistent with certain things: Negaduck’s origin story, certain characters forget who another one is after they’ve already met them in an episode beforehand. This was a problem in most 90’s animated shows with the way the episodes were aired, but it’s still jarring to say the least. Some episodes might depict a character in a way that is out of character for them and then in the next episode they’re back to normal with no real explanation other than the writing was off for that episode. We also never really get too deep into Drake Mallard’s life away from crime fighting which might not be important, but it would’ve been a nice addition. The show also didn’t have a proper ending and ended up getting canceled abruptly: even more abruptly than Teen Titans. The last episode didn’t even end on a cliffhanger but on a gag that felt like the show was supposed to keep airing like normal, but it never did. These flaws do matter, but in the grand scheme of things don’t really bring down the show as a whole.

Now before the grand ol’ conclusion, the spotlight must be shone onto one of the greatest catchphrases of all time: “I am the terror that flaps in the night”. His other catchphrase “Let’s get dangerous” is also up there. The thing that makes this catchphrase so amazing are the things he adds after them.

“I am the terror that flaps in the night,
I am the auditor that wants to look at your books.”

“I am the terror that flaps in the night,
I am the ten dollar service charge on all returned checks.”

“I am the terror that flaps in the night.
I am… obviously out of my trademark blue smoke.”
[He says as he’s surrounded by red smoke.]

“Let’s get dangerous” also has some ad-libs such as “Let’s get considerate.”

The one-liners in this show are S+ (that’s better than an A+ by the way).

Well here we are, Darkwing Duck was and still is one of the greatest cartoons. If you watch it and look at it more closely, you’ll find that there’s much more to it than slapstick comedy. The characters have layers each deeper than the last, it features an incredible cast of heroes and villains with their own personalities that stick out like a ducks beak. The show was never really as popular as it should have been and because I was so young at the time, I never really understood why. It had everything that a great show needed and more. Maybe I’m just basking in the nostalgia, or maybe the world just isn’t fair to crime fighting ducks.

What I do know is that Darkwing Duck will forever be underrated and that might not be such a bad thing. After all, you can’t be underrated without without being appreciated in the first place. So here’s to you Darkwing Duck for being the cartoon we always needed and deserved.