Extraction is a gritty piece of action cinema directed by Sam Hargrave that cuts to the quick. At first glance, this is one of the cleanest action movies ever produced. There are levels of cinematography in Extraction hitherto undreamt of in the genre. Not surprising, given the whole project was written and co-produced by the Russo brothers. Everything done here is executed to the highest degree. To that regard, Extraction elevates the action genre in the way John Wick and The Raid have in the past and adds to that pantheon, a gripping story mixing brand new takes on established clichés into play.

The film’s director, Sam Hargrave, is also a seasoned stuntman and coordinator under the Russo brothers. Much like Troy McClure, you may know his stunt work from such movies as Avengers: Endgame, Avengers: Infinity War, Captain America: Civil War, and Atomic Blonde. You know, only the genre-redefining action projects. Hargrave was made for this! It helps that Extraction is sourced from the graphic novel Ciudad also co-written by Joe Russo. Written with the intent of deconstructing action stereotypes and notions of heroism, the source material shows through in all the places the film succeeds. “The best action films are those where the action is used to illuminate character and their choices or motivations. The emotional life of the character is told through action”, says Joe Russo. Goodness is there ever plenty of action.

Extraction goes in. The action scenes are amazingly choreographed. Which is to say the scenes don’t have the rhythm of a dance, which is strange because it is prearranged choreography. But that’s how good they are. With movies like The Raid and John Wick, the main character kills everyone in the room, without fail, and with maximum creative efficiency. Extraction dials it up in both creativity, efficiency, and gore but is surprisingly very grounded. There’s been a call for stunts to have their own category at the Academy Awards, this movie is a strong contender for that argument. For those readers who may be into video games, you’ll be able to name every gun you see – it’s like the whole thing was sponsored by Call of Duty. The body count is high as all hell. Extraction really drives home the mantra, ‘with efficient kills comes no responsibility.’

Where most action flicks rely on the ‘double-cross’ plot hole, Extraction gives audiences the Russo special. Wherein, a particular plot twist is twisted further. There is not only a legit triple-cross (!), but each of the changes in allegiance is based on a super relatable moral code. When a mercenary has a change of heart regarding why he’s about to catch a few bodies, you will not only understand why he does it but you will root for him to catch said bodies. It’s really rare in this genre and very well-done. This is the kind of shock that follows through the entire watching of this movie. A pleasant surprise to say the least.

There are core elements to an action movie: chase scenes, explosion set pieces, extreme marksmanship, etc. Extraction has all of them and adds some stunning cinematography. It’s beautifully shot. There is some beautiful composition in a few scenes which are not only wildly uncharacteristic for the genre but are as good as any arthouse movie. Props go to cinematographer Newton Thomas Sigel.

The fight scene camera work and transitions are kind of brilliant. Exceedingly brilliant for a simple ‘action movie’. Camera choreo is difficult to nail, even with a huge budget. The team behind the scenes deserves an Emmy and an Oscar. Extraction blends all the techniques of action cinema that exist to date. Upgrade upped the ante on camera-centric action to the max, but Upgrade is sci-fi, so there’s valid reasoning for that. Extraction on the other hand grounds that technique in well-designed close-quarters combat. There’s even a chase section about five minutes long that feels like one smooth shot that could give Children of Men or Birdman a run for its money.

Don’t let anything you hear about this movie fool you. It’s a very polished action movie with few tropes and plenty of conflicts. Extraction delivers an exceptional entry that stands out from the avalanche of programming being pushed on folks during the quarantine. 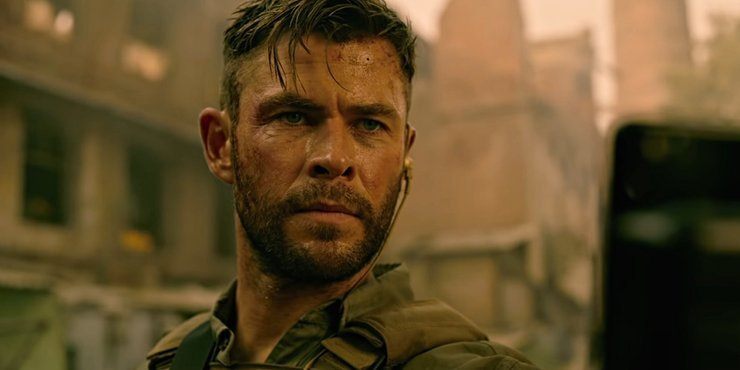