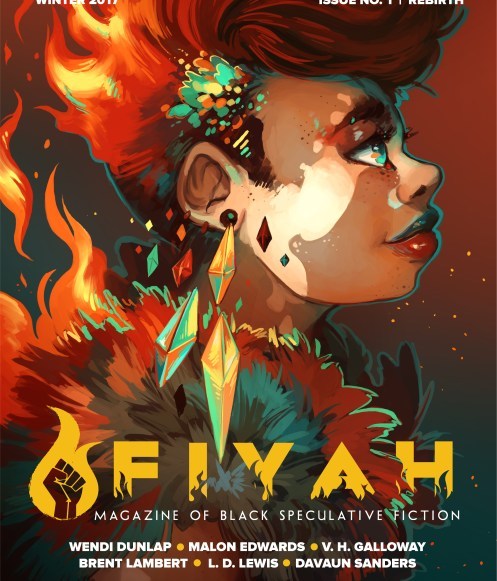 Black Speculative Fiction in the year of 2017 has arrived, opening with Fiyah Literary Magazine’s first issue and yes

This is what you came for.

This is that imaginative, challenging, entertaining science fiction and fantasy you’ve wanted to read, aimed right at Black experience and Black context, featuring all Black characters. When the setting of the opening story is a Black beauty shop/biotech called The Black Hand Side you know you’re in the right place. When the second story in the magazine is a meditation on Police authoritarianism and brutality as a magical curse, you EXTRA know you’re in the right place.

There was not one story in this issue I didn’t enjoy and there are a few in here that I will re-read later, just to enjoy them again and mark the best lines to memory.

Here’s the Table of Contents, to give you an idea of the variety represented and the authors you can look forward to:

The Shade Caller — by Davaun Sanders

We Have Ended — by V.H. Galloway

They run the gamut in styles and genres. The opener “Long Time Lurker, First Time Bomber” introduced me the world of solarpunk and I couldn’t be more thrilled. Along with “Police Magic”, both are set in near futures gone wrong, but filled with optimism and possibility. “The Shade Caller” by Davaun Sanders (who also wrote The Seedbearing Prince series of sci-fi books) and “We Have Ended” by V.H. Galloway (author of The Un-United States of Z series of zombie books) are both steeped in re-imagined African settings, mixing mythology with very real human emotions and situations. “Revival,” set on a distant planet, populated by escaped prisoners, is full of classic sci-fi ingredients, but what comes out of this short story is anything but expected. And “Chesirah”? The last entry in the issue, “Chesirah” explores captivity and the drive for freedom in a powerful, intoxicating way. It is the longest piece but you won’t notice, it draws you in.

The stories share a few themes, not only the issue’s theme of “Rebirth” but also, and significantly, there’s a thread of justified rage that runs through them all. There’s a sense that change and renewal are possible, but you have to get mad enough to grasp the possibility with both hands when the time comes. These are definitely for our times. They are not stories of complacency, but they are also not universally stories of struggle either. These characters fight, and win, but none of them are victims and only some of them are heroes.

Some of the authors have novels to their credit; for some this is their debut. In either case, these are folks to follow into the new year. Go pick up Issue #1 now here on their website. And if you want to know more about the Fiyah team, read our interview with them. There is a variety in tone and style in Fiyah #1 that promises the best in Black Speculative Fiction is all around us. And it has me asking: