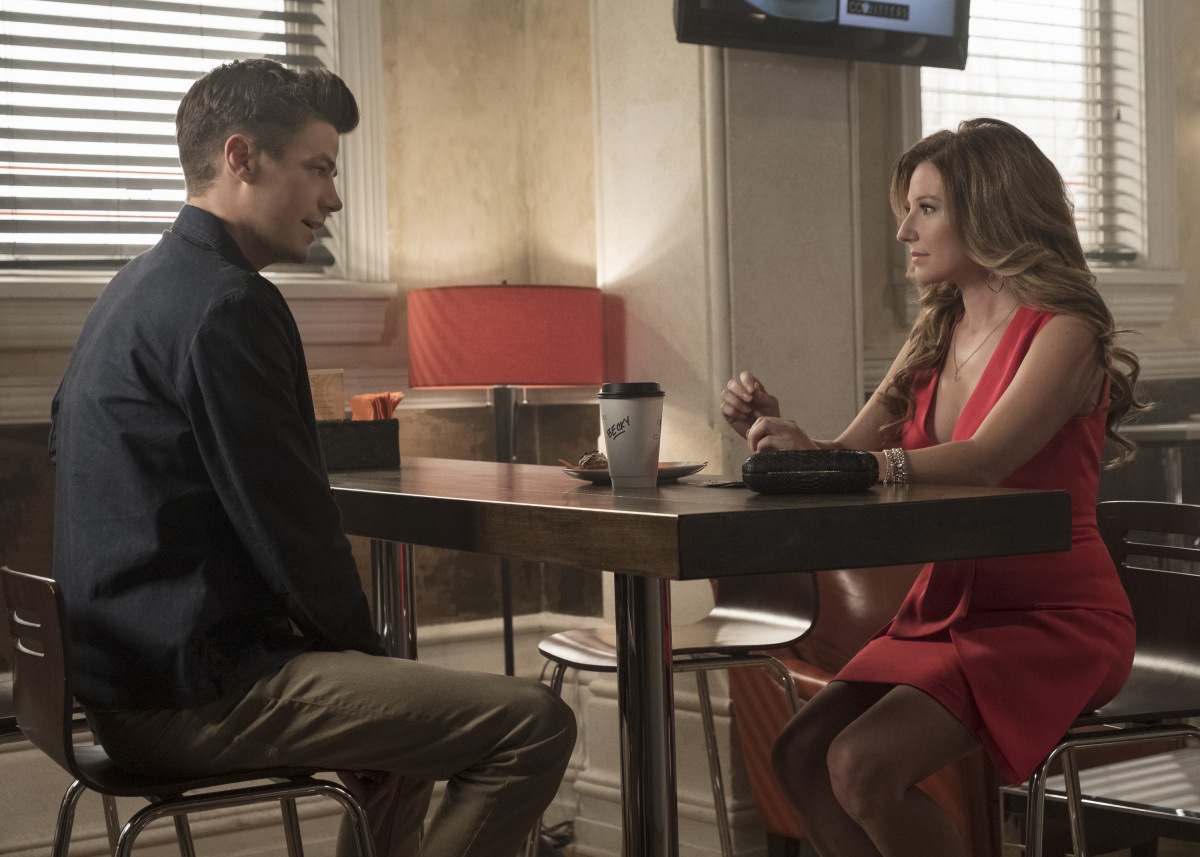 This episode gives us our first good look at the season 4 Big Bad. The Thinker is giving us that evil creation backstory. The villain of the week, Rebecca Strong, is a 24-year-old blackjack dealing jinx (according to her Myspace page…LoooooooL). She’s always had crap luck, until that fateful day she steps onto the same bus as our good friend Kilg%re and sees the metahuman light.

If you had any doubt fun Flash was back, they rammed that fact down your throat off the rip. This episode’s director did an incredible job hittin viewers with the pump fake because I damn sure thought Cisco was vibing The Thinker’s secret lair. Turns out, Mr. Luxurious Locks and Team Flash are just casually puttin in that Laser Tag work against some Central City tweens. Or should I say, gettin beat down by a bunch of C-City children.

A breach alert goes off amd they all rush back to S.T.A.R. Labs ready to open up a can of whoop ass. It’s not a meta breaking through, just Jessie Quick coming through for date night with Wally. But Jessie doesn’t show. In her place, Harry appears with a “Break Up Box” containing a hologram of Jessie doing the A-Town stomp all over Wally’s heart.

The team tries to act like they didn’t just see Carrie at the Dance before their eyes. I did warn y’all about Wally’s hurt ass possom mop hair. Robbery in process, so the Flash zips down to the bank but unfortunately slips on some marbles before he can apprehend the young Grand Theft villainess. All the while, The Thinker is watching. 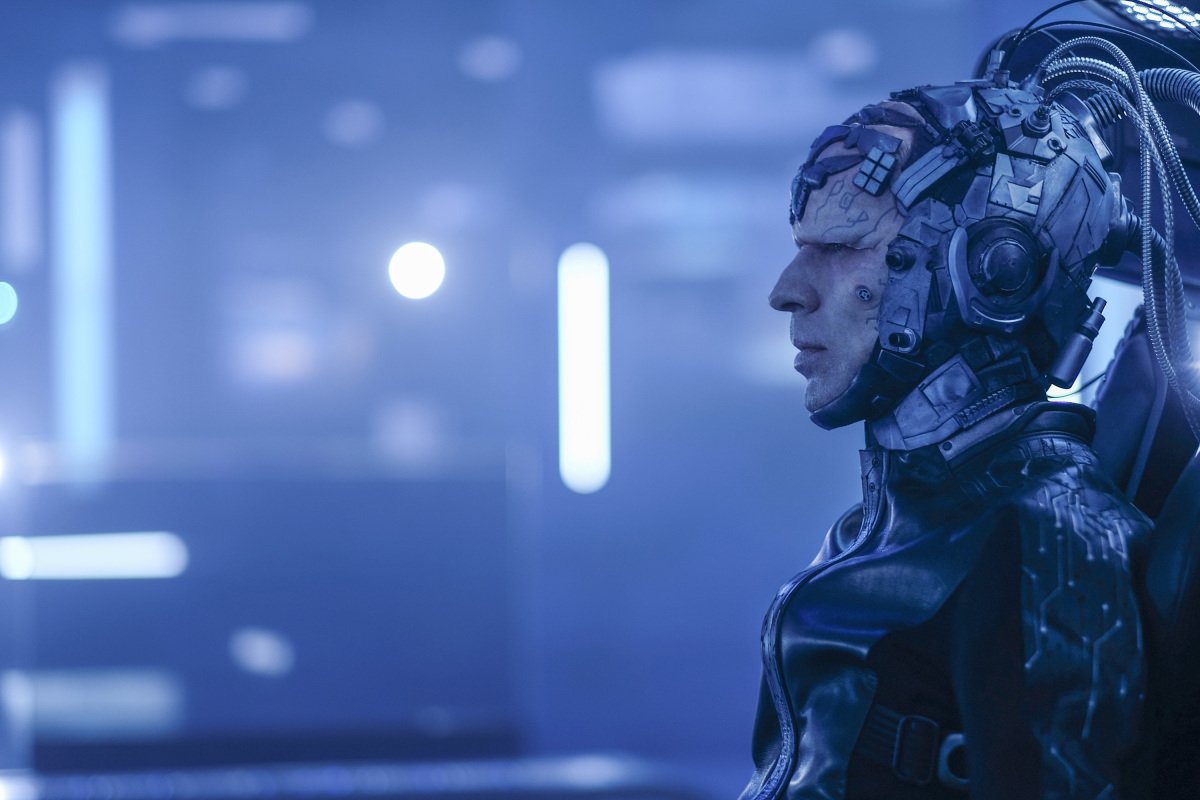 After some facial recognition software identifies her as Becky Sharpe, Harry puts the team onto Quantum Entanglement. What we call luck, he describes as particles around a person becoming entangled a certain way, forcing good or bad things happen. The dark matter around her creates a quantum good luck field, and the more good luck she has, the more bad luck people near her encounter. They watch the bank robbery footage and observe the 3 Stooges level comedic bad luck of every person she walks by. Security guards out here having heart attacks, tellers falling all over — all done with well utilized slow-mo as Becky tip-toes her way to the vault and Harlem Shakes her way back to to her awaiting cab. She literally laughed her way to the bank.

Iris has to run to the loft to pick up a package. She out here lookin like utter perfection in that wedding dress. Barry, being the dumb speedster that he is zaps his way into the apt and sees her in the dress. She freaks cuz it’s bad luck and he tells her its alllllright cuz they just lost both of the wedding venues they wanted. They got 6 weeks and need to get it together.

Cisco, Harry and Barry go searching for a dark matter zone and find out that bus that was swallowed by the Speed Force in the season premiere is the actual bus that Becky and the new meta crew came from. Joe is sad they created this new wave of metas, but he’s got bigger (?) problems as he needs to be ran down to his house to help Cecile with some leaky pipes. Swear that wasn’t a joke. It’s raining inside and Cecile can’t even. She leaves Joe, who tells Barry he’s been thinking about selling the house. It’s was some real touching ass shit between father and son. They reminisced on birthday height measurements and keeping memories no matter where you live. Cisco finds Becky at CC Jitters. Barry goes in trying to convince her to stop her evil bad luck streak. Only thing is, she gives the same amount of fucks as Trump does for sexual abuse victims. Zero. Zip. Zilch. Nada. She on that Taraji P. Henson, “It’s my time to shine” flow. She on that every woman in Hidden Figures flow. And Barry knows he can’t do a thing to stop her. Out of every corner of his eye, he sees a repairman with a nail gun that could kill a baby. A barista on the 2nd floor tripping with a platter of scolding hot coffee. Coffee machine ready to explode. Once again, the director/showrunner really does a great job of utilizing slow-mo to accentuate the potential hazards of any one room or location.

The team doesn’t know what to do. Cisco names her Hazard and thinks their fortune may be turning around because he got his rogue naming swag back. Iris calls Barry to put on a shirt and meet her at a church, pressing him to get married, NOW. She wildn. Like a Tyler Perry movie wildn. Luckily this Dennis the Menace in the face altar boy used cinnamon incense for the ceremony and the priest succumbs to melted plastic face boils and starts to cough up a lung like a leper with da plague. Wedding is off. Again.

Harry and Cisco have had a rocky episode and meet in the (white)board room where Harry reveals that Jessie kicked him out of her super team on Earth 2. Cisco looks like he was bout to lend him a shoulder but low probability (bad luck). Meta alarms are going off like crazy. Hazard’s bad luck field is expanding to an enormous area. Planes are going down, pipes are bustin outta walls at the West house, Cecile slips on water and hits the deck like she caught the Madden ’06 hit stick. Joe has trouble breaking down the door, but gets in to save vintage cocoa butter kisses. Hazard’s chillin at her old job, rolling 37 snake eyes in a row, winning millions and causing the bad juju field to engross half the damn city.

The Flash speeds down to find Hazard, who has set her eyes on the 10 million dollar cherry slot jackpot. Flash gets there, slips on some coins that fell out of someone’s pocket and literally handcuffs himself with the superpower dampening restraints. As absurd as that is he tries to get up, falls, sets off the fire alarm and gamblers go scrambling. At this point the city’s infrastructure is crumbling and a sign falls on Flash, pinning him under it as he sees the 2nd cherry appear. It’s a wrap once that 3rd one hits but he bout as helpless as a blind teammate playing Destiny 2.

The city’s being ripped apart, which means some dangerous shit at the Lab is bout to blow. The Particle Accelerator is getting close to exploding so Cisco and Harry begin cutting wires. Harry gets electrocuted and catapulted into the wall leaving him lookin like Marv in Home Alone 2. That jolt must’ve caused an epiphany because Harry tells Cisco to chuck up the dueces on this mission and let it explode. They let the fuck it flow through their veins, the Particle Accelerator blows and releases a charge that temporarily disables Hazard’s quantum back luck field. Barry breaks loose and puts ol girl in cuffs. She was real cute about it too. Just took that L like, “I understand.”

Cisco and Harry make up on some cool tech colleague flow. They break out the classic super soft CW violins and woodwinds as Cisco lets Harry know he doesn’t have to go back to Earth-2 where he isn’t wanted and has no friends. He can make a life with the family he has right here. It was the perfect balance of touching and real.

Worthless Wally Watch happened for a reason. That reason was so the young man could focus on self and find out where his hero journey is taking him. The team takes turns sayin goodbye to Kid Flash and wishes him luck.