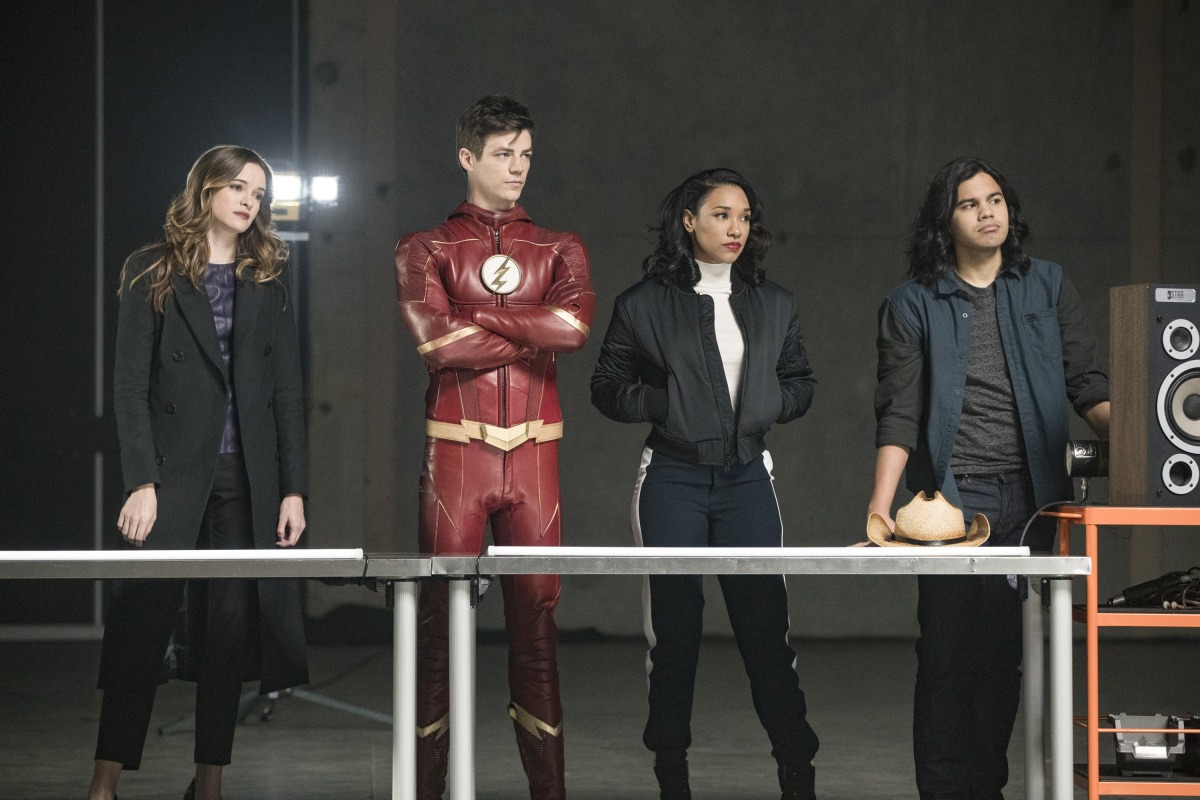 Barry Allen may be the fastest man alive, but that doesn’t stop the entire police force from hitting him with the coldest shoulder since Juice. Captain Singh is like, “Look fam, we all got bosses and mine said you bout to ride the bench like Brian Scalabrine.”

Barry fills the team in and gets back to the actual damn plot of this season — our four remaining bus metas and the ever present fact that DeVoe could magically appear at the drop of a dime and hit a meta with the brain slurpee tentacle. Cisco and Ralph return with a lost and found box full of clues from the infamous bus that started this all. They find a clue in the form of a CD. Remember those? Some dude probably tried to give you one for free in Times Square… then request money for it.

Cisco vibes the Izzy Bowen-titled CD. He sees her and her band playing a country music gig down at some venue. Dibney is repulsed, cuz country music, then heads out with Barry to put Isabella into the bus meta protection program. Only problem is… shorty been through some shit and can handle her own, evident by her ability to blast our heroes clear across the room in deafening fashion and disappear without a trace. Turns out this meta, who will not be named Soundwave because a Transformer already claimed that one (poor not-nerdy Ralph), can manipulate soundwaves and basically cause major audio damage.

Iris da Melanin GAWDESS has been servin up looks and one liners all season and I’m here for every single scene!!

DeVoe da Body Snatchin Boy and Evil Genius Engineer Bae are plottin at the spot when they realize things ain’t as peachy as originally planned. Barry and Ralph know he needs to absorb all the bus metas powers so they’re constantly protecting DeVoe’s targets. Not to mention, non-threatening DeVoe himself is feeling the after effects of absorbing too much dark matter when he sucked the prison metas dry. He may be able to Kirby ayebody but the body he jumps in is deteriorating like Carl after he got bit.

Harry gets back from his unsuccessful visit to Jessie Quick on Earth-2 and runs into Cecile. They have an awkward convo then Cecile confides in him about reading Joe’s mind and dreams that are most definitely Lethal Weapon scene reenactments. He’s gonna create something to help her.

Dibney puts the team’s investigating abilities to Cersei-shame when he tells the team to check the musician’s website if they want to find Izzy. They do. They feel dumb. They go to warn her. DeVoe pops up and destroys the boys in sequence, but Izzy ain’t somebody to fuck with. She unleashes a soundwave that launches the villain inside Hazard’s body into oblivion, and Mrs. DeVoe has to rescue him with her INSTANT TRANSMISSION abilities. Like, where the fuck did her Goku powers come from?!

The team tries to explain the level of danger this threat is, but Izzy is a head strong woman and doesn’t want the Flash’s help, training, or explanations. She’s caught up in her musical dreams to make it big and is throwing caution to the wind to achieve it. While waiting for the elevator, Dibney chases her down to give her one of those handy dandy Team Flash speeches, and she stays. .. cuz of course she does.

DeVoe is going off on his wife for stepping in to save him, because (apparently) getting sonic blasted across the parking lot is having things under control. He’s throwin a tantrum because the analyzer that DeVoe is hooked up to isn’t working as fast as he wants and the readings they are getting are all bad, fam. Marlize hypothesizes that maybe taking on all these powers has changed him and his mind. For the worse. Looks like she’s slowly but steadily realizing she done fucked up.

I don’t know where the hell the team has set up this garbage bag blacked-out training facility with intense spotlights, but Iris West-Allen hands Izzy a violin to help her focus her audio blasts, and homegirl goes to work! Dibney and his damage-absorbing Gumby flow sets up, and Izzy sends some mean blast waves Ralph’s way, impressing the team with her ability to master this new woodwind weapon of destruction. Also, Ralph and Izzy are definitely feelin each other.

The Harry and Cecile show continues to be a riot. The device he built to stop the dream mind reading is 10 lbs of head trauma that doesn’t help her sleep any more than listening to Joe’s Danny Glover appreciation dreams. He later shows up to bring her a smaller, modified version of a Mental Activity Dampener “sorry version” 2.0. Harry tells her he’s been trying to befriend someone his own age since he’s been failing at everything else in his life. As they sit and have a real convo, he explains how the device works and realizes how he might be able to use it on DeVoe… even tho it was an all thoughts-only conversation. I was pretty impressed with the quality of that scene and how their interaction genuinely moved the plot along.

After a successful start, 6 hours go by of Fiddler being straight trash. Barry steps in and launches a clay pigeon at her that she wrecks. He kicks it up a notch and throws dozens of clay discs at her and she beasts on every throw until a shard slices her, requiring some stitches. Barry feels bad but knows he has to push her. Unfortunately for Team Flash she feels she got more hurt with them than without them, so she hits Ralph with an oral wind scythe jutsu, knocks the boy out cold then chucks up the deuces. 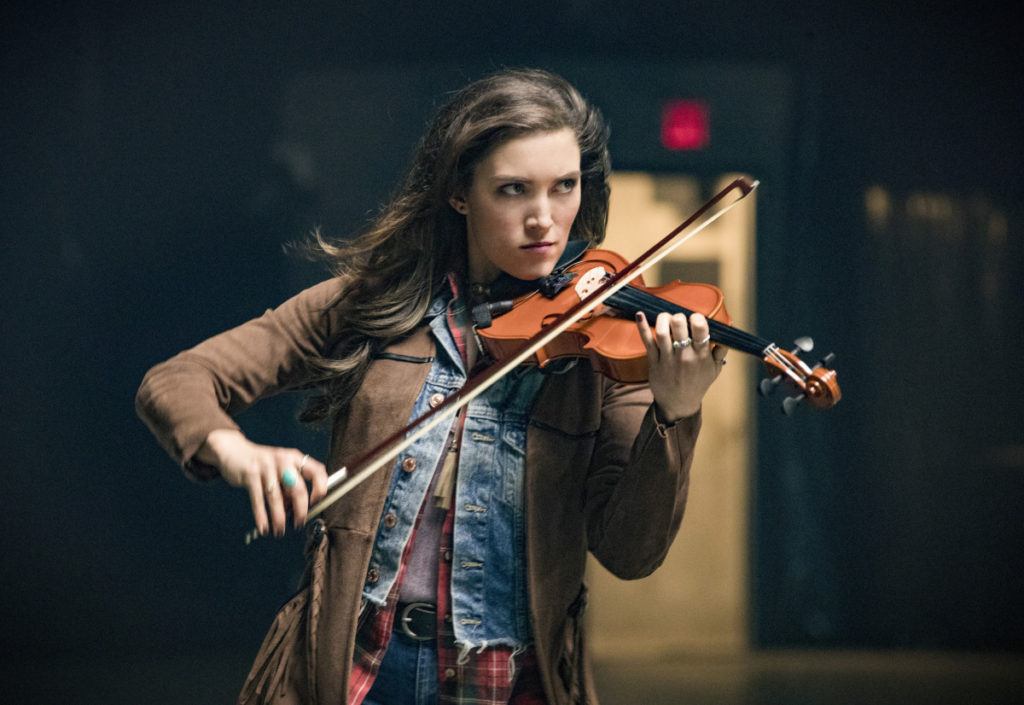 Meanwhile, Harry is ready to drop knowledge on the squad. Instead of the mental activity dampener blocking brain waves coming into someone’s head (like Cecile listening to Joe’s dreams) they can use it to block outgoing brain waves and stop DeVoe. Cisco shits all over the name and Harry drops the newly named Cerebral Inhibitor. Barry is hit with a flashback to Savitar telling him about the inhibitor helping them fight DeVoe. They plan to attach it to his head, which will stop him from being able to body snatch. Ralph lets everyone know it won’t be as easy as that now that they lost their trump card in Izzy’s beast powers.

Izzy calls out DeVoe and immediately gets hit with the bad luck bug when her fiddle strings pop. She’s about to catch the Cell fade when Flash and Elongated Man run in to save her. She swoons at Ralph actually coming to her rescue before being told to run so the guys can get their asses handed to them by our big bad. It was established that Izzy’s a low key gangsta so she pulls up outta nowhere and does what the veteran speedster and indestructible stretchy man couldn’t. But Kilg%re and his tech powers are alive and well inside DeVoe so he fries that bad boy and comes at Harry’s intelligence in the process. 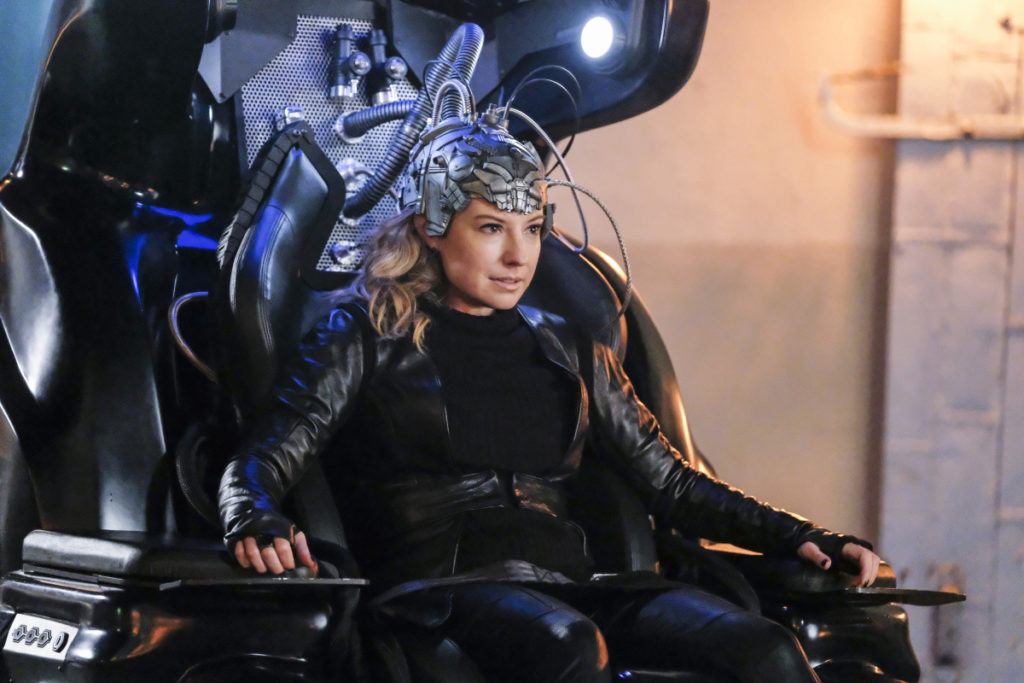 DeVoe traps Izzy, whips out his body snatching chair and takes her life and body while Ralph tells her to stare into his eyes as she is absorbed. Without any options, Ralph watches the only girl he’s probably ever had real feelings for get turned into pure evil.

Barry and Harry try to figure out why the inhibitor didn’t work. Harry blames himself. Cisco goes to work on figuring out how DeVoe jumps in and out of the world. Our boy Mr. Ramon thinks DeVoe and his lair reside inside a pocket dimension. The only positive of the entire episode is that gets Barry some of those cocoa butter kisses that no man on this Earth deserves.

Cecile pays Harry another visit as he’s scribbling equation nonsense on a napkin. They have a nice chat about how well the B.A.D. 2.0 works, calling his daughter finally, and how to rid the mom-to-be of those pregnancy ankles. The Golden Girls theme song must’ve been playing on set cuz I sensed all sorts of “thank you for being a friend” vibes.

Riding along with BNP’s Flash recaps? You can find them all in one place — The Flash tag!