I been gone for a minute, now we back with the jumpoff! The Andrew Kreisberg-less Flash kicks off with “The Trial of The Flash.” DeVoe and his evil Edith-Clarke-with-the-flow wife set-up Barry for the fall after the consciousness transfer, Invasion of the Body Snatchers move. This is the first time our Big Bad was someone other than a speedster threatening the lives of Team Flash, so I have no clue where this season is going and cot dam is it a breath of fresh air!

Barry up in CCPD gettin the Law and Order treatment. They runnin through the damning evidence as if this was an interrogation after some To Catch a Predator sting. Barry sittin there unbothered like, “The charges…WACK, the crime…WACK, the evidence…WACK, Zoom…WACK, your hairline…WACK!” Barry keepin it a buck though. He knows his prints are all over the murder weapon and that he was found standing over the dead body, but he’s stickin to his I’m-innocent-and-I-was-framed story.

Out on Bail? I Guess?

The team out here droppin maniacal laughs on them haters cuz they know it doesn’t matter what goes down during the trial since “It’s not like any prison can hold you.” But it turns out, this 2% milk drinkin hero, Barry Allen is ready to do a bid if convicted!! Wholesome ass superheroes with their ethics and morality man. Of course, the team leaves Barry to stare off into the distance and contemplate life before Cocoa Butter Kisses comes over to soothe him as the piano music comes cascading down on thine shipping ears.

Over at the Devoe household, it turns out The Thinker had more than just a body swap up his grand scheme sleeve. The psycho cerebral assassin did more than transfer his consciousness into Dominic’s body, but he absorbed Prison Bae’s powers on some Kirby shit!! He is both who he was before and who he planned to be. But what’s this?! Evil engineer bae is having doubts?? Prison Bae Thinker calls out his other half with his newfound Professor X skills, then sells the shit out of his Professor DeVoe inside Dominic’s body act. I became a believer after that scene. 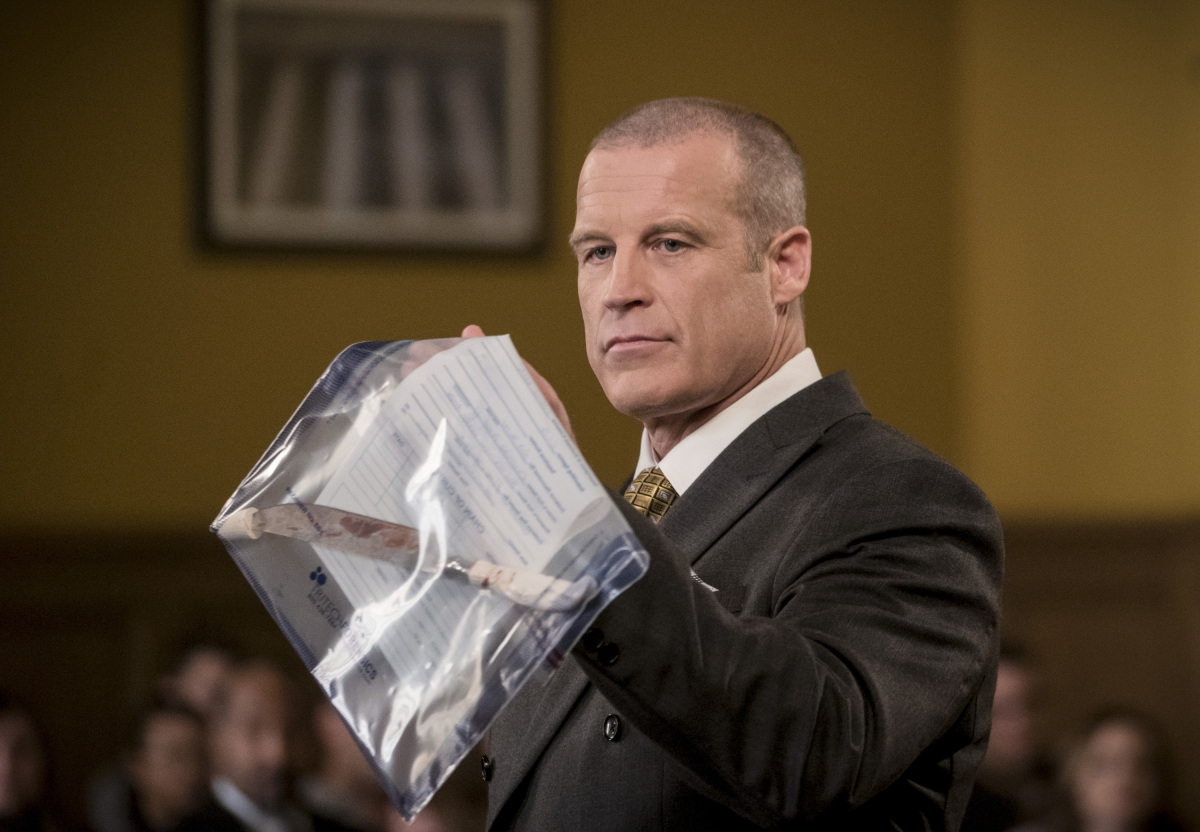 One actor I ain’t believe for one second was the lawyer tryna sully the good name of Central City’s finest hero! Maannn if this muscle head prosecutor don’t get the fuck up outta here with his washed-up Johnny Bravo in a courtroom ass. Sure, his allegations line up nicely but we all know Barry bout to beat this rap. But the evidence doe…

Villain of the Week

Meanwhile, downtown Central City done turned into a Sleepy’s commercial cuz our meta of the week is knockin cats out without breaking a sweat. He’s just walking by people, glowing Hulk-green and making innocent civilians sip on the sleepytime tea. Back at the trial, this prosecutor is laying into Barry, who is doing his best Stone Cold impersonation, cuz homeboy don’t look like he give a half a damn about these allegations.

Let’s take a moment to appreciate Iris and her sly comments while the prosecutor berates our boy!! Iris da Melanin Gawdess out in the crowd servin looks and backseat driver quips.

Cecile sacrificing two weeks of PTO so Barry could get the best defense attorney in the biz, but a break from the trial shows us money can’t buy you everything! She’s like, “Yo fam. Remember I’m bout to gift you a baby bruv so we fam now. Let me break this shit down for you right quick. The evidence is stacked up against us like rappers holding cash up to their ears like cell phones. Testify or go to jail. Das it.” Barry ain’t with the shits.. cuz if he takes the stand he can’t tell the whole truth. He doesn’t want to lie about being the Flash and “become exactly who they think I am”…a liar.

While Joe’s Butterscotch Kisses bae is busy holding down his son legally, Joe is doin the absolute most! This cat is outside the DeVoe residence on his Jessica Jones PI flow, snapping photos of Mrs. DeVoe making out with Dominic.

Mrs. DeVoe hops in the cross-examination booth with so many tears of faux pain. She tells the jury what we all already know about Barry stalking DeVoe…all facts, but good Lord the embellishment was wild! Joe busts through the court doors and hits Cecile with the prison bae makeout pics. Too bad da evil engineering queen is ready to pull out all the punches and claims her “late” husband encouraged her to find a man who could put it down in all the physical ways he couldn’t! Like are we serious people?!? She rushes out of the courtroom in pain and anguish until Iris runs up on her like an OG and Marlize drops the widowed wife act. Bars are dropped as Iris pleads for her husband’s freedom. Marlize hit Iris with the chopped and screwed face then spit venom at her like, “I’m doin what I gotta do for my husband. The question is, what are you willing to do for yours?”

Iris walks back in ready to tell the entire world that Barry Allen is the Flash until Barry unleashes a hidden power and moves to stop Iris so fast that everyone appears to be frozen in time. And he brings Iris into the Speed Force time bubble with him!!! This was huge. I love that the showrunners keep hitting us with new powers every now and then.

Isn’t There a Villain?

Caitlin discovers the meta, now named Fallout, is emitting radiation like Cherynobyl and poisoning everyone he comes across. Cisco, Caitlin, and Harry pull out all the Team Flash tricks to find homeboy before he goes Hiroshima on C-City.

Fallout is simply livin his best life when he bumps into a woman and goes Piccolo on ayebody. Bodies are hitting the pavement left and right. His RADs (I didn’t really catch what those were, but I’m guessing RadioActiveDestruction) are goin all the way up and Barry has to leave the closing statements to save the city, which is in the process of turning on him. Flash fails miserably at trying to stop Fallout (who really ain’t tryna hurt nobody) from going nuclear. He just starts shooting energy blasts, destroying everything, and everyone who tries to stop him. The guys urge Caitlin to transform into Killer Frost and head down to stop him, cuz ice beats heat. Spoiler Alert: It doesn’t work, but we do get this great interaction here as a result.

After Killer Frost is blasted through a bus stop and into the stratosphere, Barry has the bright idea to create a vacuum to contain his energy. Flash really puttin on for his city like John Carlos. He’s running life-saving lap after another and real-ass skin is being shredded from his face like extra sharp cheddar cheese while the jury convicts our boy for killing this deceptive villain. Vibe and Flash work together to funnel all of the city-destroying power roaring out of Fallout into a breach to another Earth. Flash is physically battered and torn for the first time in a while, but the city is saved, and Barry Allen is a convicted murderer. Meanwhile DeVoe can be seen rubbing his hands like Birdman as his plan unfolds before our eyes.

The splicing of the final two scenes was exceptional. Seeing that judge sentencing Barry and Captain Singh honoring the Flash split back and forth was very well done. A softer version of me would’ve been wading in a puddle of salty tears by the end of this episode. Gotta say, these have been some of the best and unexpected twists and turns these last couple of episodes. I damn sure thought the judge was gonna give him some bullshit ass sentencing and I most definitely didn’t expect to see Henry Allens’ name carved into the wall. Nobody could’ve seen that new ability coming! Can’t wait to see that in action as we continue recaps for the rest of this methodical season of The Flash.