This week of The Flash shifts the focus away from Barry and his newly found fun ways to the rookie of the team. Lessons are learned and values are identified as Ralph Dibney and Barry Allen play mentor and student; meanwhile, Cisco and Harry welcome a few eccentric minds to come together for a common purpose, in When Harry met Harry.

We start off with Ralph Dibney learning from Barry Allen. When some unlucky fool of a thief tries to rob the 2 most un-robbable guys, Barry uses it as a teaching moment. They tell the guy to guy to give them a minute as they hilariously call a huddle to figure out how to apprehend him and for Barry to break down rule #1. Protect people. Save civilians and safeguard the innocent. Also, don’t hurt bad guys… if possible. Ralph bombs most of the episode. The thief gets impatient and shoots Dibney, which means the bullet bounces off his stretchy skin and shoots the idiot. The second bullet lands in the shooters ass. It was pretty great. 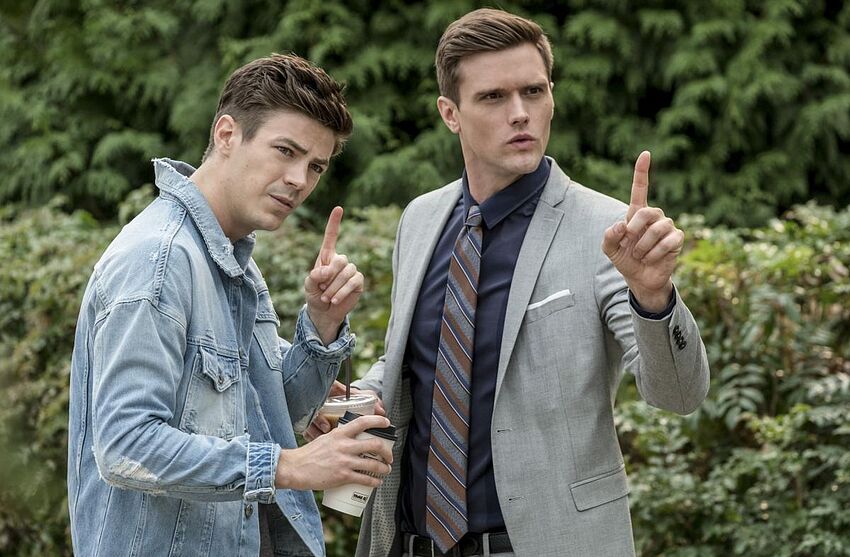 Barry and Iris bring Dibney to get hypnotized to jog his bus memory. A hilarious vision of The Weeper, sadness and crying ensues. Ralph sees a bison and the gang has their first clue. We segue into our villain of the week, Mina Chayton, AKA Black Bison, who is on a Native American artifact rampage. She’s collecting these relics that belong to the Sioux and catchin’ bodies in the process. This was the first interesting villain we’ve had this season, as she goes about her business for a damn good cause. Stealing items that rightfully belong with the tribe they were taken from, instead of sitting in a museum? I ain’t even mad. Her powers are absolute fire, too. Homegirl can turn inanimate objects in moving creatures, ready to do her bidding. It was Sesame Street season on the Flash, as they use Dibney to teach everyone what effigies are. Statues are no longer valid descriptions!

Black Bison makes a stone tiger, caveman, and iron suit of armor come alive as she collects her spirited, but misguided rewards. Flash and Dibney (with his snazzy new body suit) show up to squash her Black Friday 5-finger discount spree, and you just know Ralph is about to do some fuck shit. The caveman hits Flash with an Aaron Judge Stone Age homerun swing and he gets molly whopped into a light pole that begins to teeter. She almost escapes, but Dibney lets his “get the bad guy” cop mentality take over as he holds onto Black Bison’s car instead of protecting the civilians and the pole comes crashing down on an unsuspecting little girl. And guess what? It was all for naught as Black Bison escapes CCPD with the illest use of her powers. The cops were all drooling over the unveiling of the new and advanced police gear. Black Bison takes control of the mannequin, armor, and tear gas yopper then breaks out of jail with ease.

It turns to a real Night at the Museum kinda episode once she goes for the final piece of the necklace she’s been hunting down. Flash obviously could defeat her in milliseconds, but this episode is all about lessons, so there is always a civilian around. She unleashes a T-Rex on the boys, which destroys Barry’s life with a dope tail with of bony destruction then exploits Ralph’s soft side by making him choose to save her or the Stan Lee-cameo-lookin’ guard on duty.

He obviously makes the right choice this time and we get an amazing “for the love of Jeff Goldblum” line as the T-Rex munches on The Elongated Man’s fleshy body like some Bazooka gum. Flash catches Black Bison and finally exploits her one weakness to take her in, by tossing an artifact in the air and cuffing her as she goes to catch it.

S.T.A.R. Labs: While Barry and Ralph were off Luke and Yoda-ing, Cisco and Harry had a visit from a bunch of Harrys from all over the multiverse. They’re all ridiculous and over the top. Tom Cavanagh really channeled his inner Matthew McConaughey for one of the characters, Dana Carvey for another, and lord knows who else for his other performances.

It was little extra, but they had some jokes and do complete the mission they all are there for, finding out who this Devoe character is. Unfortunately, it turns out to raise more questions than further our understanding of The Thinker/DeVoe, because they appear to be the same character, but looks mad normal with the Pleasantville flow. His evil assistant is mad Carol baking cookies, Stepford Wife, and he’s a regular ass wheelchair-bound dude. Barry and Joe look dumb shook and empathetic. Catch up on any missed recaps from this joke-filled season here.