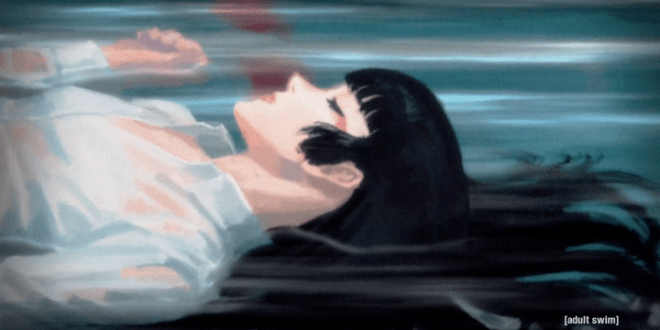 FLCL: Progressive reaches its penultimate episode with its most stylistic showing yet. Fooly Cooly has been known to change its art style from installment to installment; but in episode 5, “Fool On The Planet,” we get art changes from scene to scene. Remarkably, it fits perfectly. 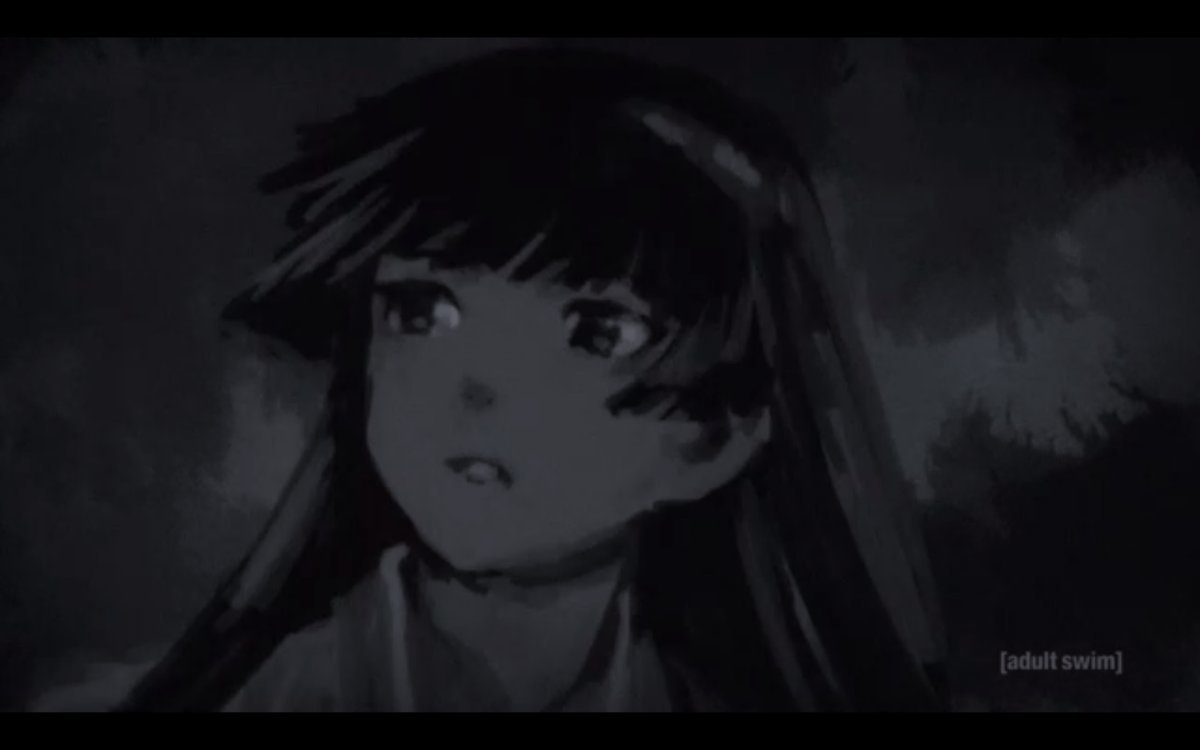 The show opens up with a gorgeous dream sequence from Hidomi, as a chalk or charcoal-style painting. Hidomi then wakes up, and the bulk of the episode continues in this rough sketch / low frame-per-second style. When I saw the preview for this episode, I didn’t think it looked too good. In action, however, it was a much better fit for the show.

Haruko, red-eyed and stomach bulging from consuming Jinyu in the last episode, proclaims to her class that she is getting married. She tells them all to enjoy life by going to the amusement park. Hidomi, however, couldn’t be less interested. As Haruko pokes and prods at Hidomi, Ide steps up and tells Haruko to leave her alone. He takes Haruko to the empty school pool, where he tries his best to defeat her. In response, Haruko toys around with him. When she straddles Ide, he proclaims Haruko doesn’t satisfy him — which clearly strikes a nerve. Haruko is used to getting her way when it comes to flirting with the opposite sex, so it was interesting seeing her buttons getting pushed for once. Hidomi catches them in this awkward position. The stress causes her to suck up Ide, or at least a portion of him, into her N.O. portal. A strange rubber suit is left behind. 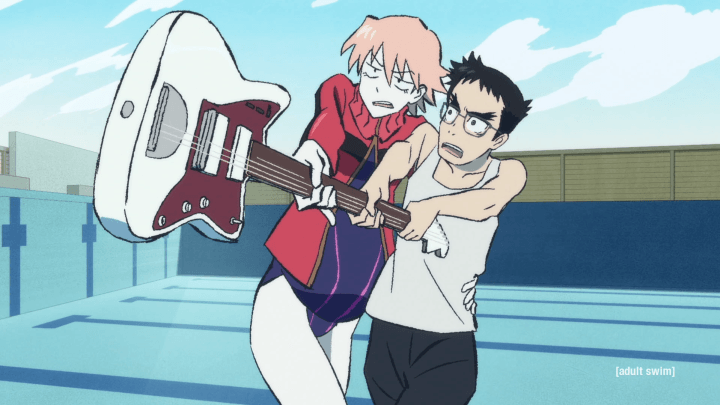 Meanwhile, the kids at the amusement park have paired up into couples. This was actually the plan of the owner, the man in the mascot costume. Using their emotions to suck up their N.O. fields and power up the amusement park , this transforms it into a Power Rangers-esque robot that attacks the Medical Mechanica factory.

Hidomi holds the rubber suit under water while reminiscing about earlier that day. We get a nice little scene that will be familiar to fans of the first season: the manga scene, with a bit of a twist. While Season One’s version was a frantic scene, this one is much more toned down. It’s almost like a poem in manga form. Here, we find out that Hidomi’s mother is closing down their family café. For Hidomi, the cafe represented them waiting for her father — who supposedly walked out on them — to return. 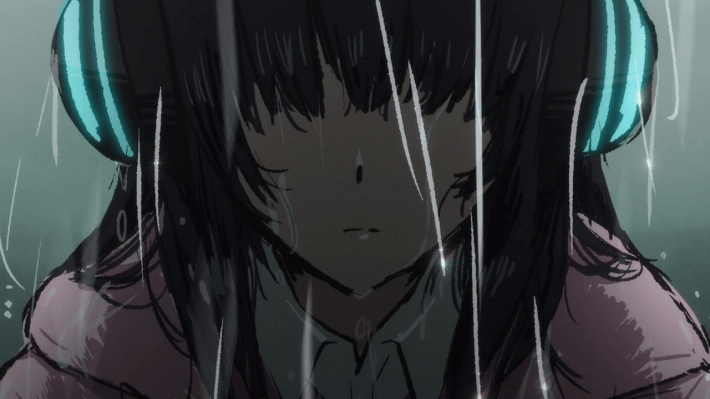 The rubber suit inflates and literally floats off into space, before being sucked into a giant satellite. It is then shredded, and fed to a Canti-like dog by a mysterious woman. This episode was all over the place, but you have to expect that by now. Back on earth, Hidomi transforms into a half-robot being and attacks Haruko. She proclaims that Haruko searches for the Pirate King like a girl in love, something that Haruko dismisses. The sky turns red, a sign of the Pirate King arriving…and the episode ends.

This episode was very sporadic, dumping a lot of info on us that wasn’t very clear. A lot of what FLCL does well is giving us clues, without explicitly stating one way or another what the clues lead to. It allows us to fill in the gaps in a better way than most anime that attempt to go this route. I look forward to what the final episode will bring us. 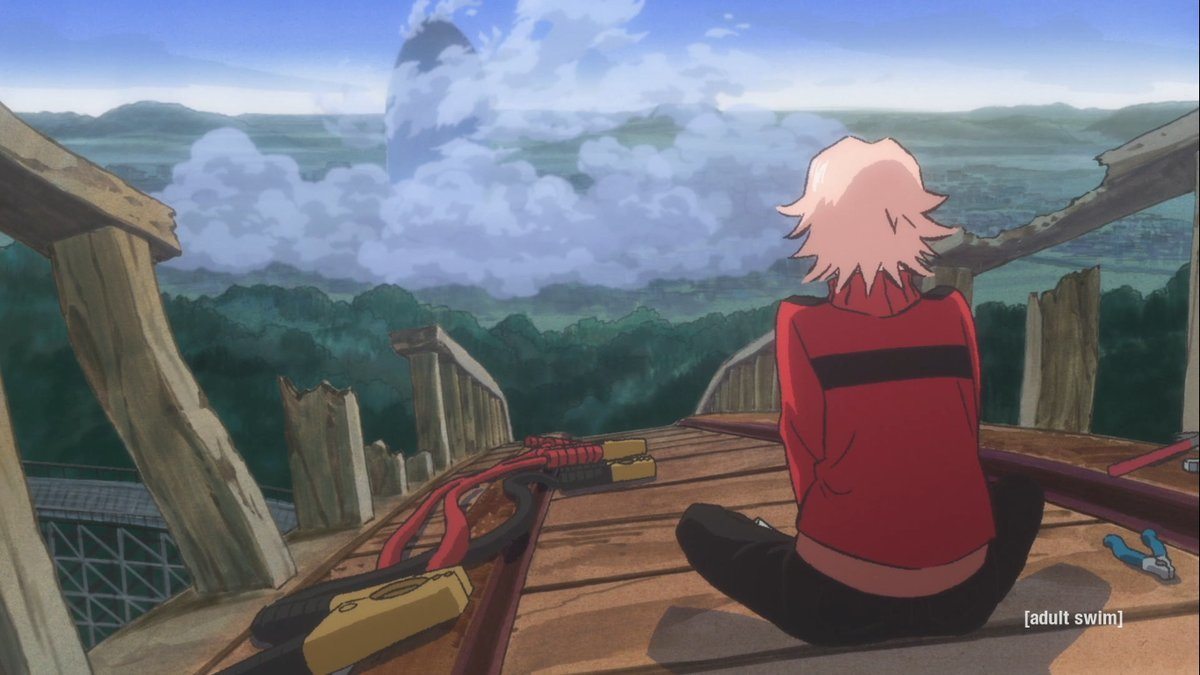