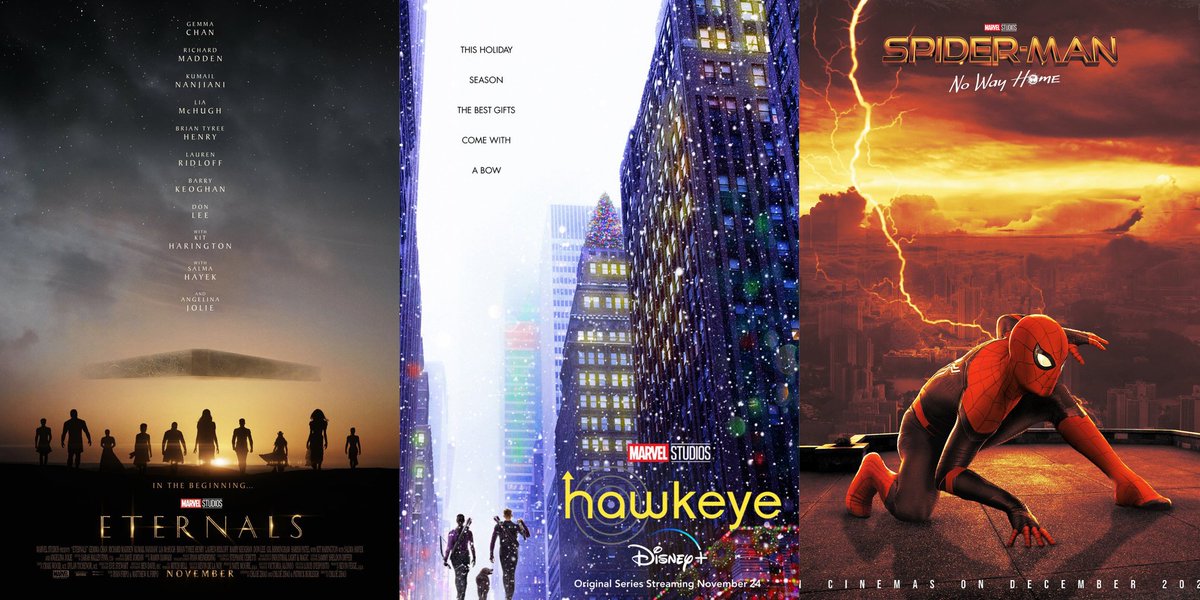 Movies have been a hot topic among the nerd community since COVID restrictions eased up earlier this year. Does the allure of IMAX and Dolby Digital outweigh the hazard of watching something together in a theater? Hell yeah! And this ain’t on some disregard the advice of the CDC shit, it’s cuz Marvel’s upcoming lineup is looking like Murderer’s Row out here! To finish off 2021 alone, we have Eternals, Hawkeye, and Spider-Man: No Way Home, and all three are giving off the flame emoji vibessss. Marvel x Disney+ has been on point with every one of its silver screen releases, but movie theater tickets rake in the dough more than anything. Let’s take a closer look at these three projects.

The return of Jeremy Renner and his beloved Hawkeye character have cats hyped more than kids runnin through pumpkin patches in October. This story is so much more than Hawkeye coming back too. First off, we’re getting the glorious introduction to Kate Bishop who will surely follow in her mentor’s footsteps and take over the Hawkeye mantle one day. But before that, Hayley Steinfeld will be playing the straight shooter in training. The confident, fun, and endearing young lady who used a tragedy that would’ve crippled some, to blossom into the crime fighting beast that she’s now known as. I truly hope Marvel x Disney doesn’t shy away from the traumatic experience she endured, because it is a fantastic trajectory to send her on in the making of a new superhero. Hawkeye premieres November 24th on Disney+.

You hear that sound? No, it’s not the murder hornets that had people shook last year. That’s the buzz of the Eternals poppin off right now! I feel like everywhere I go I see a new poster for the movie in the subway, the trailer while watching videos online, and their commercials consistently on tv. But more importantly – the movie looks like it’s going to be so ill. The cast is superb, and the visuals are on point thus far. Starting off by casting Angelina Jolie, the Brothers Stark, Brian Tyree Henry, Salmaa Hayek, and exciting new deaf actress ​​Lauren Ridloff had people buggin! Then the costume designs came out and they looked impressively comic book accurate with plenty of updates to make them quarter of a bil film worthy. Don’t get me started on the movie footage!! Ridloff’s Makkari alone has been sending shock waves through the nerd community with the style of filming done to portray the speedsters ability to rip the runway on land and traverse planets in no time.

Despite the change in origin story (coming from a planet called Olympia, as opposed to being one of the 3 offshoots of humanity), Eternals will be one of the biggest Marvel movies in a long time and continue to expand on the scope of the Marvel universe following the destruction that Thanos has wrought. Eternals will be hitting theaters real soon. Get ready to see what all the hype is about on November 5th.

Last but not last, we have arguably the most leaked movie of all time! A typical big budget movie is like a leaky faucet with casting news and set photos hitting the web. But this movie right here my ninja?! Spider-Man: No Way Home is a dilapidated roof in a monsoon, because it seems like EVERY DAM DAY some new bomb is dropped, character cameo is announced, or some insane reveal is trending. Then the trailer came out showing Peter going to see Doctor Strange to ask the most selfish thing a hero could dare ask! The result looks pretty wild, but you know what? The movie is guaranteed to still have so many unseen plot points and dope surprises that we’ll definitely be seeing typical billion dollar box office Marvel numbers again on December 17th.

After the trailer’s debut, Tom Holland revealed that he was on a plane for 10 hours and hadn’t peeped any reactions before that.

“Honestly that is just the tip of the iceberg. You have no idea what else is to come. I am so excited to share more with you guys, and it feels so good to be back with Spider-Man, to be showing you trailers, to be having films coming out. This is so exciting.”

Spidey is the golden boy of the MCU, and his latest movie is guaranteed to be adored from Miami to Marrakesh. Eternals is a group many have zero knowledge of, including die hard comic book fans, so it’s all guaranteed to be fresh and excited. Hawkeye blends a well established and loved character with a brand-new iteration of the archer, which will make for such a dynamic relationship! Forget Oscar season, Marvel owns the last 2 months of 2021!