It has been a busy summer, with artists’ alleys full of good new stuff. We featured some from BlerDCon on our Instagram page. But every month brings more new independent comics producers to the market. Let me introduce you to the ones I’ve found in the last 3 months. But if you’re looking for the new, the personal, the unique, and the genuinely loved, one of these might fit your taste. Try something new today. 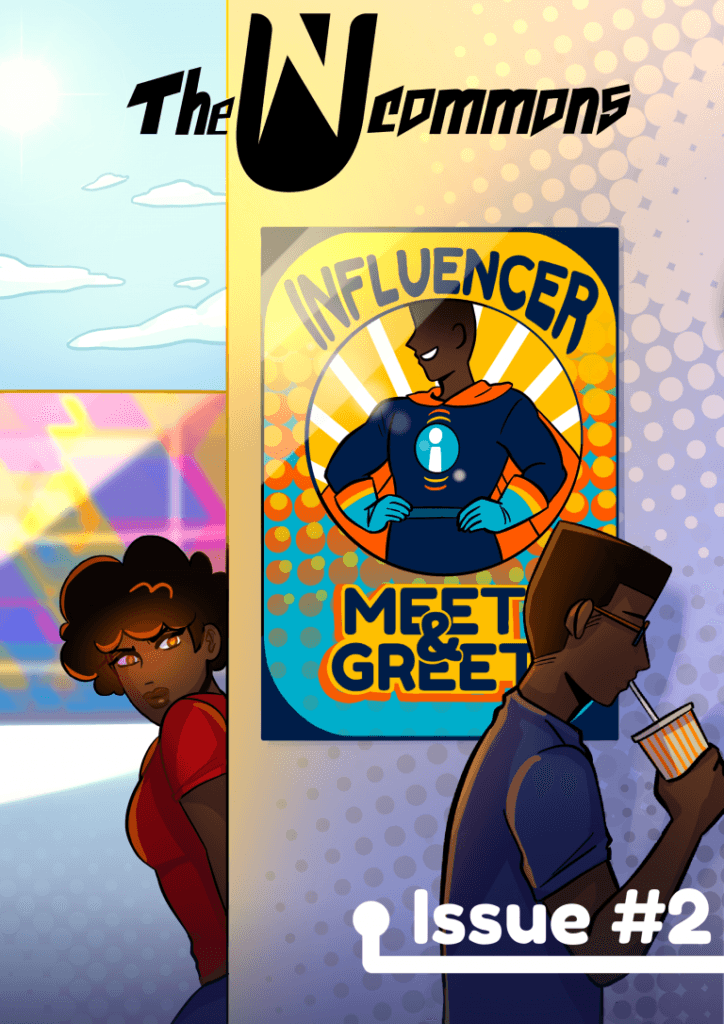 Shopping for comics for my child, The Uncommons immediately caught my attention. It has an approachable, curvy, digital style that promises lots of color and expressive faces. I was surprised, given my first impression, that I ended up engaging with the story more than my child. The plot to start: Iris, with the power to see the future and a deep well of dedication, travels to Delta City to meet the premier superhero of the age: The Influencer. The Influencer is exactly what he sounds like, he exerts his power to do good through social media, encouraging others to be better. But is he only Instagram-deep? Iris challenges him to put his feet on the ground and that’s where the adventure begins.

Each issue of The Uncommons is free and posts monthly. The run is 9 issues in. This comic features a diverse cast of characters with fun, tweaked powers. The plot poses questions about doing the right thing, and how to get involved in a world that feels much too big to even understand, let alone impact.
The comic itself is only beginning, as Weird Enough Productions invites fans to contribute through art workshops and how to’s and writing prompts. The idea long term is that the setting will incorporate those crowd-sourced ideas into the main story, or even split off into other tales. There are quizzes on the site and a full wiki of all the characters. Fan-fiction can’t be far behind.

This kind of truly interactive comics experience is ideal not just for kids and teens but also for adults. If you like webcomics, or Lion Forge Comics, this is good one to try. 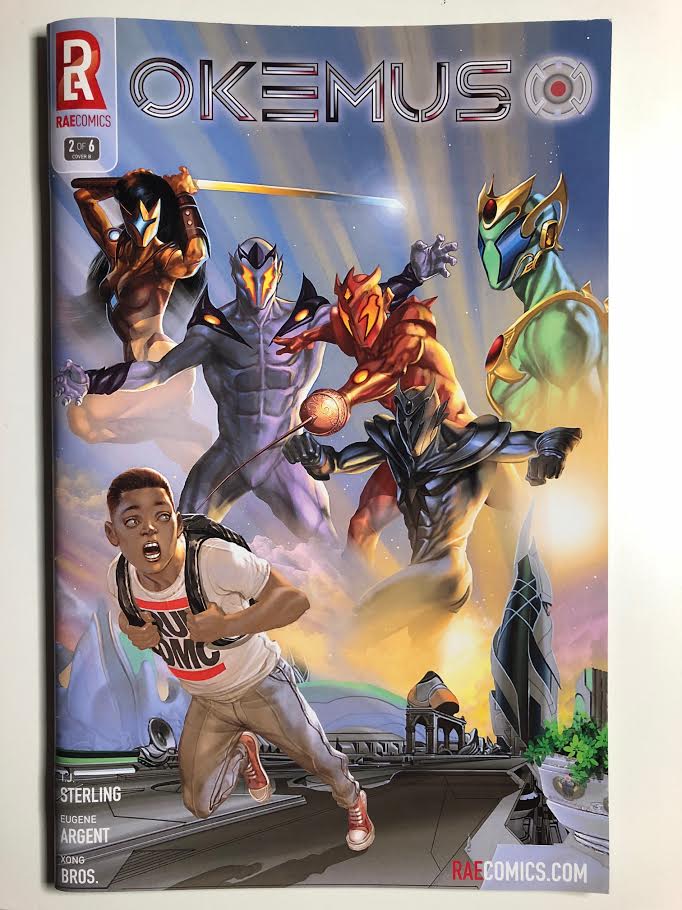 I met the writer for Okemus, T.J. Sterling, at BlerDCon in DC back in July and had to pick up his high-quality, high-action comics. We start off simple. Cale, a Black young man, is an orphan, raised in foster homes and on the street before making his way to Purdue University to study genetics. Once there, he finds he’s being pursued by 4 superhuman time-travelers — The Hunters. Their appearance, and trying to evade them, triggers a black-out rage and Cale’s transformation into *something else*.

Three issues of Okemus are available. There are a number of artists, Eugene Argent, Jaxen DeNobriga, Taylor Esposito, and the Xong Brothers among them. However, the art style is consistent throughout — intense, mech-like martial arts inspired combat, interspersed with just enough human interaction to keep things moving forward. Along with Cale, other characters include Briana, his Latinx almost-girlfriend from childhood, and Tisena, one of the Hunters with second thoughts about flattening West Layfayette just to capture Cale.

There’s a definite Hulk vibe to the comic, along with mechanized future warriors which gives it a hard edge. Suitable for a fan of Vertigo Comics 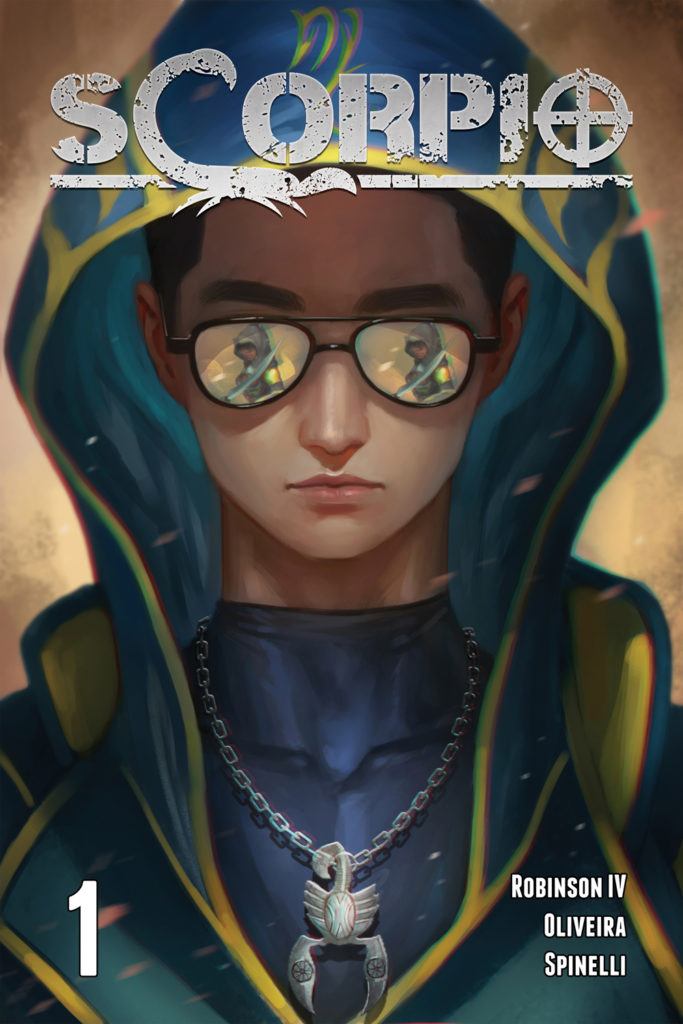 Scorpio comes from a cool idea: What if there were ninja schools organized around the 12 European zodiac signs? They’d be locked in an eternal battle, of course! So yes, I had to have Issue #1, even if my own astrological sign wasn’t the center of the plot. Daniel Shim is a millionaire tech bro with the morals we associated with *that guy* — none at all. He’s inherited possession of his father’s ancient mystic scorpio relic, but who needs old martial arts skills when you’ve got sex and blow? Nobody. Until the family mansion is attacked by another martial arts clan. Daniel is pulled back into the old family business, and the kicking goes from there.

Scorpio is only one issue in with #2 promised soon. Written by John Robinson IV, and illustrated by Cezar Oliveira and Viviana Spinelli, the comic has a slow start, but once the fighting happens, it is a rush to the ending. There promises to be plenty of supporting info, special designs for each sign/clan, and all kinds of online goodies to engage with.

This has the most “mainstream” vibe of any of the indies I’ve read recently. Scorpio would fit right in between Iron Fist and any other title. If martial arts action is your thing, this is it.