Movies. You know, those things that we watch to entertain ourselves and to put off doing other things that are more important like washing the dishes or cleaning our room or calling our mother? You know what I’m talking about. Movies are a universal form of storytelling that’s at the forefront of media. It’s a combination of logistics, writing, acting, directing, and music. When one of these is even just slightly off, it compromises the integrity of the whole.

As I’ve gotten older, I’ve started to appreciate the craft of scoring a film a lot more than I did when I was a kid. A good score touches your soul and sticks with you for a long time after watching the movie. It’s as iconic as any shot or line from the film, and I’d argue it’s one of the more important aspects. Without a score, your movie almost lacks a personality. It’s one thing to tell us something is sad. It’s another to show us. But things are taken to the next level when some music swells up and actually makes us feel sad.

Flicks like Star Wars, The Godfather, and Black Panther are what first come to mind for me when I think of powerful music in film. All three provide us with music that instantly sets the tone of their stories. From the hope of a galaxy far, far away, the burden of living up to your family’s reputation, and the birth of a hero-king in an African country, scores like these take us to a place that visuals simply can’t.

Comic books, like every other form of storytelling, are a trip to another world. But reading is a silent trip, only filled with the sounds of the voices in your head. And that’s okay. It’s what makes reading so powerful. It’s a symbiotic relationship between the team that came together to tell the story and the audience, who digests it. But reading comics, in particular, is very similar to watching a movie or a television show. It’s a marriage of visual art and writing. Comics are essentially really beautiful storyboards. So that connection is strong. And while comics don’t need music the same way a movie or television show does, that doesn’t mean they can’t benefit from it.

I’m someone with a short attention span so normally when I read, everything has to be completely silent otherwise I start to pay attention to everything else that isn’t the book in front of me. It’s a struggle. But when I was in college, I discovered the best YouTube stream that anyone under 30 would know “lofi hip-hop beats to study to relax/study to”.

My life was forever changed. This endless stream of chill music was enough to add some spice to my studies without compromising my attention. It actually made reading and writing a lot better, and it didn’t seem so much like a drag. It opened a lot of doors for me, and I began to seek out more music that I could put on in the background of whatever I was doing. Suddenly, life wasn’t silent anymore.

Thereafter, I started a creative exercise where I would try to find the perfect score to go with any given comic book. A lot of the time, it’s pretty difficult. But when I find a perfect pair, it’s like making a peanut butter and jelly sandwich for the first time.

The easiest ones are comics from the Big Two. These require the least amount of work.  As comic book movies are at the forefront of cinema, most major properties have an on-screen adaptation. And the good ones have some fire-ass music as well. Someone else took the time to come up with specific themes for characters and the mood and tone for the story. You’re just piggybacking and repurposing it for another medium.

Steal It From The Movies

A no brainer is Ta-Nehisi Coates’ Black Panther. Ludwig Gorannson’s score for the MCU adaptation of Wakanda’s very own fits this book like a glove. Coates’ writing can be a bit dense at times, but pairing it with Ludwig’s score really helps immerse me into the world so seamlessly that it never becomes an issue. Goransson manages to capture the authenticity of African culture while making it feel unique to the fictional country of Wakanda. He’s also worked a lot in the Hip-Hop industry, so there are some trap beats and heavy bass tracks as well. It’s a seamless blend for our favorite Hero King.

Another one of my favorite pairings over the past few years is Scott Snyder’s Justice League comic with Hans Zimmer’s Man of Steel score. If you don’t know Hans Zimmer, you actually do. You just don’t realize it. He did the score for The Lion King, Inception, and Pirates of the Caribbean. He’s an absolute GOAT.

His Man of Steel score slaps, too. It’s one of my favorite scores of all time, and no matter what you think of the movie, you can’t deny that the music is next level. Recycling it for Justice League just gives it new life for me. But it’s a good match up because Snyder’s take on the classic book swings wide while maintaining a strong emotional core. The music from Man of Steel takes on the monumental task of distancing itself from the original John Williams score and modernizing it for a new audience. It’s wholly original, taking no cues from what came before, but it still manages to capture the scope of a super-powered alien who was raised on Earth. It teeters back and forth between big uplifting moments, to the more heartfelt and burdensome ones. It’s perfect for one of DC’s flagship books.

Needle In A Haystack

Taking things over to the indie side of comics is where it gets a bit difficult. You can’t just find the score from the movie version of a comic anymore. You’ve got to do a bit of matchmaking. That means that you’ve gotta really understand what you’re reading to be able to find something that compliments it.

One of the strongest pairings I’ve made is Jeff Lemire and Dustin Nguyen’s Descender paired with the Interstellar score by Hans Zimmer. I keep telling y’all he’s the goat!

Descender is about a young lonely android boy who just wants to be loved. On the quest for his best human friend, he finds out that he’s actually a messiah figure to all of the robots and androids in the galaxy. He holds the key to their salvation. It’s heavy emotional stuff and I love every bit of it. The Interstellar score enhances every emotional beat conceivable. Zimmer uses a lot of organs and synth to cultivate a unique sound that sounds both unique and familiar. It was made with space in mind, so at times it can feel minimal in it’s design, almost like it’s giving room to the endlessness of the universe. But overall, it’s grand and expansive and can flip a switch in an instant a tug on your heartstrings. It’s exactly what you need for a story like Descender.

Another indie Image book is East of West. It’s Jonathan Hickman’s absolute crazy creator-owned comic that came out during his hiatus from Marvel. It takes place on an Earth where the Civil War never ended and the United States is divided up into pieces controlled by different factions. It’s in a weird future that feels like the past. And it’s a western.

Do you know what else takes place in a not-so-distant future but has western sensibilities!? HBO’s very own: Westworld. And if you know Westworld, you know that score is FYYYEE. Shout out to the homie Ramin Djawadi. If that name sounds familiar, he’s also the man who scored Game of Thrones. *ahem* FYYYYYEEE! He’s a young goat himself. He’s also Iranian, so we managed to get some brown on this list. You love to see it. The movie scoring business is a white male-dominated field. Are you really surprised? But that melanin is out there. We just gotta do some more digging.

Djawadi manages to capture that western feel while mixing it with modern production. A big part of his score comes from crafting covers of present-day songs and making them sound like old school saloon joints. He’s done this with songs like Kanye West’s Runaway, Radiohead’s Motion Picture Soundtrack, and Soundgarden’s Black Hole Sun. He dives into the idea of familiarity in a world that’s just a little bit off.

That’s exactly what East of West is. We know it’s Earth, but it’s not our Earth. So a score that manages to capture an aspect of our history and aspects from our present goes a long way into tethering us to Hickman’s comic as well. 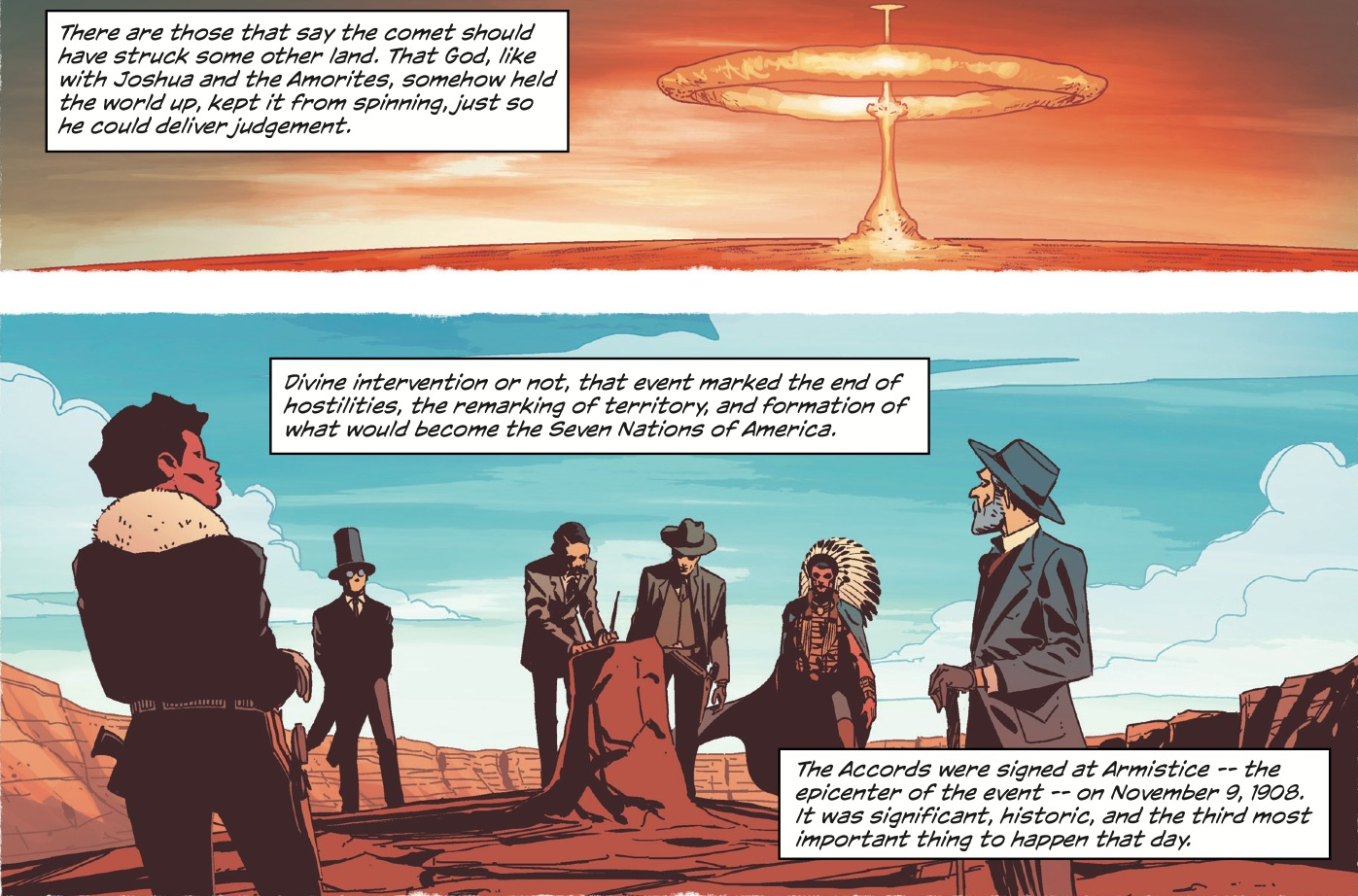 These are just some of my favorites. My heavy hitters. You’re more than welcome to use them too. But I also encourage you to find some of your own. Just try it out a few times. It’s not gonna be perfect at first. But when it hits, it’s gonna HIT. You’re gonna reach a climactic moment on the page that perfectly coincides with a song reaching its peak, and you’re gonna be sold. You won’t ever look back.