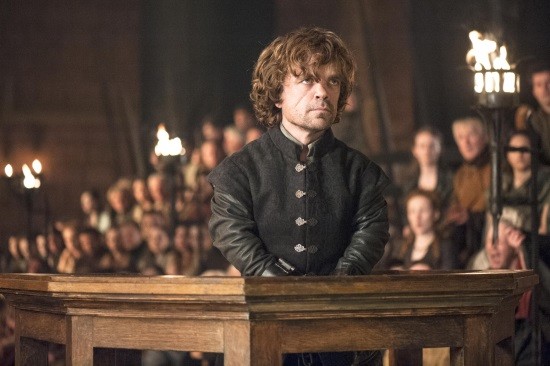 Season 4, Episode 6
There are Spoilers, it is known Khaleesi.

Hope you all had a good Mother’s Day because I think its safe to say being a mother on Dem Thrones is about the most thankless thing you can do. Cersei got one dead son, one being stalked by his dead son’s wife and a daughter she can’t see, Catelyn just dead as a muthafucka, Daenearys…., we’ll get to Daenerys

So this week, we open with two things we either haven’t seen in a while or have never seen. Stannis and the Onion Knight sailing under the mighty open legs into Braavos. On what must be the last whole ship that made it out of Blackwater Bay. That bastard is small, yo. Maybe he just trying to be stealthy about it, but I imagine it’s hard trying to claim the Iron Throne when you sailing on ships that can barely hold your big ass sails.

Stannis does what he does best, be pissed the fuck off, cuz the Iron Bank like to keep cats waiting like the cable man and shit (somewhere between 12 & 4). By the time Mycroft Holmes and his non speaking partners come out to remind Stannis he needs either an army or charm and he got neither, Davos gives a speech so great to defend Stannis, I was surprised he didn’t slip in “and the honorable Elijah Muhammad teaches us…” Basically, he was like, Tywin old, his bastard incest grandson too young for this game and somebody needs to gonna have to pay up Speaking of Malcolm, welcome back Sallahdor Saan who was straight up getting his Detroit Red on in the spa We ain’t seen this cat since season two when the price for his helping Stannis was that he would get to fuck the queen. Bruh, bruh, trust me, you dodged a bullet with that. He spittin the old tired pirate jokes, but don’t nobody care because, ya know, nudes. Davos made him an offer he knew he wouldn’t refuse. Then Sallahdor says I usually say to most of my BNP crew when they are dropping that shade, “You are not my friend, my friend.”

Lets welcome back Yara Greyjoy (Asha if you book nasty), sooner than we expected her (again, book. Nasty.). As she reads that bulletin board material that Ramsay Snow sent before Game 7. I do miss Yara, another kick ass woman whose men would jump overboard for her at the snap of her fingers. Also, she has inherited the family secret that you can infiltrate Winterfell with just a few men and some grappling hooks. Because you can’t get your Doctorate in psychology in the Iron Isles, they can’t understand that “My Name is Reek” is not only a pitch for a terrible NBC comedy, but on that Stockholm Syndrome bullshit when they try to rescue him. Of course, Ramsay and his crew show up to corner the Greyjoys in the kennels. Seriously, has Ramsay ever possessed ANY chill? Who the hell shows up to a fight already covered in blood like Frank Costello from the Departed?

Didn’t love how it concluded though. I get that her brother is no longer her brother and probably not worth dying for at this point, but they slaughter about a dozen men and get scared off by some bloodhounds? I dunno man, I thought she had more Bodie in her than that.

Still, Yara had to take that L.  Reminded me of the her great speech two seasons ago:

That’s followed by a bathtub scene that is the unsexiest intimate moment since the Silk Specter and Night Owl bounced rubber off each other in the Watchmen.

Off to Mereen where Daenerys the Unburnt looks good sitting as the Queen.  Plus you know the economy is great because sudden goat death insurance for a farmer pays out triple.  I’m just sayin, you could do worse.  Of course, the Queen barely has enough time to pat herself on the back for the mess her Dragons caused when Lenny Kravitz’s less talented younger brother come up in there talkin that bullshit.  You know, that, my father out here nailed to a cross pointing towards the narrow sea and I appreciate it if I could at least put his rotting ass in the ground bullshit.  Cats be so demanding, b.  I’m up here flawless and you want to come in here talkin about your innocent father being crucified?  So unreasonable.

Back in King’s Landing, specifically at the small council where everyone got their roles to play:  Varys as the informer, Cersei as the pessimist, Lord Tyrell as bitch boy,  Oberyn as hungover still smellin like sex and Tywin sitting at the end of the table hearing about Daenery’s conquest like

Also, great moment with Varys and Oberyn as well, as Oberyn shows every one the most proper way to assume someone’s sexual pathology.  By the way, if you haven’t figured out that Varys is basically Little Finger without the penchant for underage girls, I don’t know what show you’ve been watching all these years.

Welcome back Tyrion, who actually doesn’t look terrible for sitting in a dungeon this long.  Even as he was walking the Mile in to the Throne Room.

And look at Tommen, lookin almost-still rape bait for Margery.  And he speaks so well.  How come we never say that for white people?  Well, I’m starting it now.  Tommen speaks so well.  By the time Grand Maester Pycelle was testifying that oh bullshit, Tyrion had to be thinking about not taking that Pentos voyage with Shae (hold that thought)…

I’m sayin though, Tyrion probably wishing he had just shot Joffrey while in Florida, his chances would be much greater.  Jaime sees the writing on the wall and makes a plea to Tywin the puppet master to save his brother.  And guess what, Tywin already got a plot in place to keep Tyrion alive and have Jaime quit the Kingsguard to carry on the Lannister legacy.  Come on, this Tywin Lannister we talkin about, you didn’t think he had a plan?  You forget who you were talkin about???

Tywin always knows the chess board better than everyone else (hold that thought, too).

And, ok, a plan is in place.  Jaime gonna have to have sex with someone other than his sister, Tyrion gets to piss off the edge of the world again and this farce can be done with, right?  Right???

Then here come Shae or “I must have left my chill in my other pair of Fuck You” on some, I let him put himself where he wanted because I was his property.  Like it wasn’t her that said “I am yours, and you are mine” like half a hunned times because SHE thought it was some clever shit.  This heifer, man.  How you gonna…I mean, you really just….I’m sayin how is it possible that….

So you know what comes next right?  Tyrion got too much pride to let THAT bullshit fly.  Ser Meryn want to act like he wasn’t terrorizing a defenseless girl when Tyrion threatened him?  Fine.  Varys put that dagger in his back cuz that’s what he does best?  Aiight.  But Shae…on some My Lion is the Case that They Gave Me, shit?  Oh Hell Naw!  What follows can only be described as Tyrion droppin the Kendrick Lamar “Control” verse on the court.

I mean, I could try to be clever here, but why would I even trample on his epic confession

And that would’ve been enough.  But Peter Dinklage was like, nah bruh, I’m still salty for not winning the Golden Globe from season two, you better let the Gawd breathe!!!

When he said he wanted a trial by combat, your boy couldn’t hold it together any more

And that’s how we end, Tyrion spitting the hottest verse in Westeros in a stare down with Tywin, the court rowdy as all hell and Jaime lookin like somewhat just cut off his hand.  The other one.  Great episode.  Great episode.

Can’t wait for next week where we get to see Arya work on her water dancing, the seemingly return of The Mountain and Lysa trying to make Sansa fly.