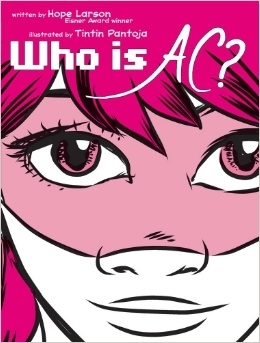 Hope Larson really has this coming-of-age, girl protagonist, girl-centric graphic novel game on deck. Her latest efforts alongside fellow female artist Tintin Pantoja have produced “Who Is AC?”, the adventures of a teenage girl named Lin who strives to find a niche, a place for herself after she and her family moves…

Li may or may not be your “average” teenager:

She cosplays with her friends.. (or rather she did before the move) She rides around on her bike. She even aspires to one day to a published author, writing her own stories and self-publishing them as “zines”. But probably the most unusual factor? Turning into a superhero via magical girl like transformation through the powers that be through her cell phone! Lin’s transformation is all flowers petals and an ultra chic outfit fir for a sci-fi novel. She wields a staff/specter like weapon paired with big hair and dangling earrings. Oh! And let’s not forget that fact that our protagonist is a (possibly biracial?) brown girl who manages to save the day and still attempt to sail through the pitfalls of being a teenager. This graphic novel touches upon feelings of alienation and pressure to fit placed upon by parents. Slightly darker themes include feeling ignored by neglectful parents, the importance of not keeping to yourself during times of grief and the cyber dangers of keeping a personal online blog.

Short. But a great addition to any teen girl’s growing graphic novel library. It has that manga influenced art paired with a story that will catch the attention of any young woman looking for something graphic novel wise that features someone that may look like her. I totally enjoyed it too, granted that I’m not a teen girl anymore (that ship has set sail a long time ago). I have a feeling that I would have loved this book even then.