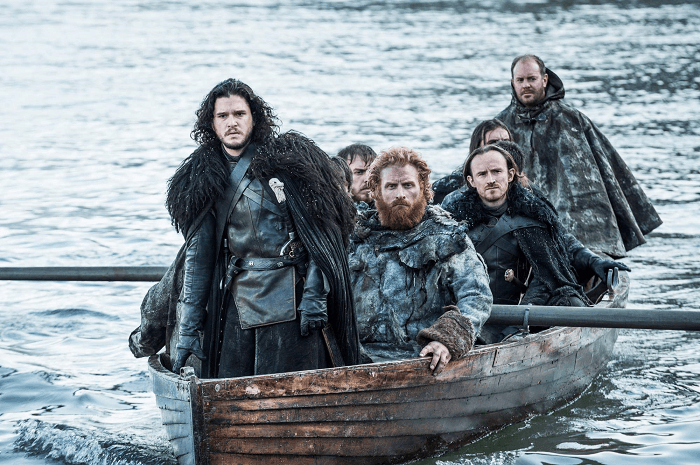 ***Spoilers be drinking water straight off the ground because this drought is serious.***

Check it, you ever pull some shit in school with your homie, like smoke in the bathroom or pull the fire alarm, then get caught? Both of you get summoned to the Principal’s Office, but one of you is talking out their ass trying to get out of shit while the other is pissing down their leg. Well, Jorah smell like straight urine right now. Tyrion talkin’ that shit, reciting Daenery’s history, talking about the strengths and weaknesses of the land and impressing everyone with his mouthpiece. Somewhere, Grey Worm is still in the MASH unit and his left eye started fluttering like, “who up in my world stealing my bars?” Tyrion councils Danny on Jorah, saying she can’t be merkin’ cats that worship her, but you can’t look strong in front of the people chillin’ with a traitor. Jorah got walked outside like he just got too rowdy up in the VIP section and bouncers be like, “you ain’t got to go home, but you need to get the hell up outta here.”

Maaaaaaaaan, listen. Cersei, Queen Mother, up in the Black Cells looking like she broke out the generic witch costume for Halloween early. You know that expression, you can either get the carrot or the stick? Well, when the sister offers Cersei water and commands her to confess, she smacks the shit out of Cersei with the carrot when she doesn’t comply. Gotta give it up for Cersei for being stubborn, but bruh, she lookin’ like she showed up for the casting call of Into the Woods and they told her to take her dirty ass on somewhere.

Lanna is an orphan and a hustler that saved up enough to money to buy an oyster cart. Arya is a faceless man, an assassin and da muthafuckin’ gawd. She’s been given a mission, like in Assassin’s Creed Brotherhood when you would send your assassin’s out to Constantinople and them killers come back with XP and new weapons and shit.

She straight up on that eavesdropping mission that sucked in the first game, but I trust Arya with this shit. I’m just here till she gets her hidden blade, fam.

Cersei is being charged with fornication, treason, incest, and the murder of King Robert. Cersei, externally is like, “that’s bullshit.” Internally she like, gotdamn, they got me for murdering Robert too? Shit, sleeping with your cousin got some serious drawbacks. Qyburn tries to convince her to confess, but Cersei on that Lance Armstrong like, naaaaaah b, you better get Oprah on the line if you want this story.

Sansa sitting up in her room like Brandy, waiting for Reek to come in. She look at this bastard like she could see through his soul.

Reek telling her he had no choice and Sansa is like, real talk, I wish I watched Ramsay torture you so I could run that shit back a couple times. Sansa is all the way fed the fuck up and she hasn’t even had to watch this fuckboyery for the last three seasons like we have. She finally gets him to admit that he didn’t kill her brothers… just two farm boys. And Sansa is like, two anonymous farm boys? I can live with that.

The Boltons are planning their defense by waiting out Stannis behind the walls, but Ramsay “I have never and will never turn down for anything” Bolton wants to take the fight to Stannis on some infiltration type shit.

In Meereen, Tyrion and Dany are probably having the most privileged “My daddy didn’t love me” conversation in existence. Daenerys never knew her father, but knows how terrible he was. Tyrion knew his father all too well, especially that he hated him and that ended with a crossbow bolt in Tywin’s chest. ON THE PRIVY (Carrie wants to make sure you don’t forget that part). This shit was great though, just hearing how Tyrion relates every story back to his own family history. It’s safe to say that the wine is really Tyrion self-medicating in place of some serious therapy.

[quote_simple]Tyrion: Well, we established that your father was a fucking lunatic right? Or did I miss the part where you still don’t know that?[/quote_simple]

Daenerys agrees to make Tyrion her advisor, as long as he stop hitting that sauce. He’s like the hot assistant coach in the NBA that got fired and ended up picking up a better gig in the Western Conference. When Tyrion tells her that Westeros ain’t really the hotness she thinks it is, Daenerys offers up those hot bars we witnessed in the trailer:

Meanwhile, Jorah returned to that JV fighting pit, talking about, you can own me as a slave if you take me to fight in front of her in Meereen. Like… I got nothin’. I ain’t never been impressed enough by anybody to sell myself into slavery.

Back in Black Cells, Cersei probably wondering why she got stood up for the Halloween party because the crew never showed up and she got all grimy and made her hair into loose clothing threads for nothin’. Here come the sister with the ladle and the confess auto-response. She poured out some water for the dead Cersei’s that ain’t with us anymore and leaves. Cersei straight up drank that shit off the floor, b. Off the cobblestones, fam! Y’all feel sorry for Cersei yet? Naw, me neither.

Gilly is nursing Sam’s wounds up in Castle Black, but Sam is concerned about her.

Ollie comes in to ask Sam why Jon is doing this shit with the Wildlings and Sam is like, yo, y’all muthafuckas really don’t know how this “there’s an army of dead bastards that will kill us all and don’t give a fuck about what tribe you are from” works, do you? Then Sam tells Ollie not to worry, cuz Jon always comes back. Instantly everybody watching is like…

Sam, what the fuck man?!?! This is TV, you can’t be saying some bullshit like that. You might as well have thrown a red shirt on Jon Snow saying that shit. Gotdamn, man.

Shoot to Jon Snow on a boat, looking dreadful as all hell, like Sam just said some stupid shit about me always coming back, didn’t he?

They about to talk this shit out with the Thenns, you know, the cats that were straight up eating Northerners like they saw that shit cooked up fine on a Gordon Ramsay show. Tormund and Jon trying to parley with Lord of Bones and summon the elders, but the Lord of Bones just felt like talking that shit. Here’s the thing… Tormund Giantsbane is no fucking punk. You can’t just throw some homophobic shit at The Bane be Giant and expect that shit to go unchallenged.

Jon is trying to convince the wildlings to come south of the wall as long as they fight alongside them when Winter show up talkin’ bout, “What it do?” I’d also like to point out that one of these Thenn fucks gonna act like Jon saying that dragonglass can kill a white walker is far fetched. Muthafucka, there’s a gotdamn giant sitting in the corner, patiently waiting for a track to explode on, and you have a hard time believing the shit that Jon is telling you? Get all the way the fuck outta here with that shit, man. Another note, it was nice see a woman wildling captain talking the most at the meet. I was thinking she gonna make a pretty cool character moving forward. Yeah, I could see her being a nice addition in the future… 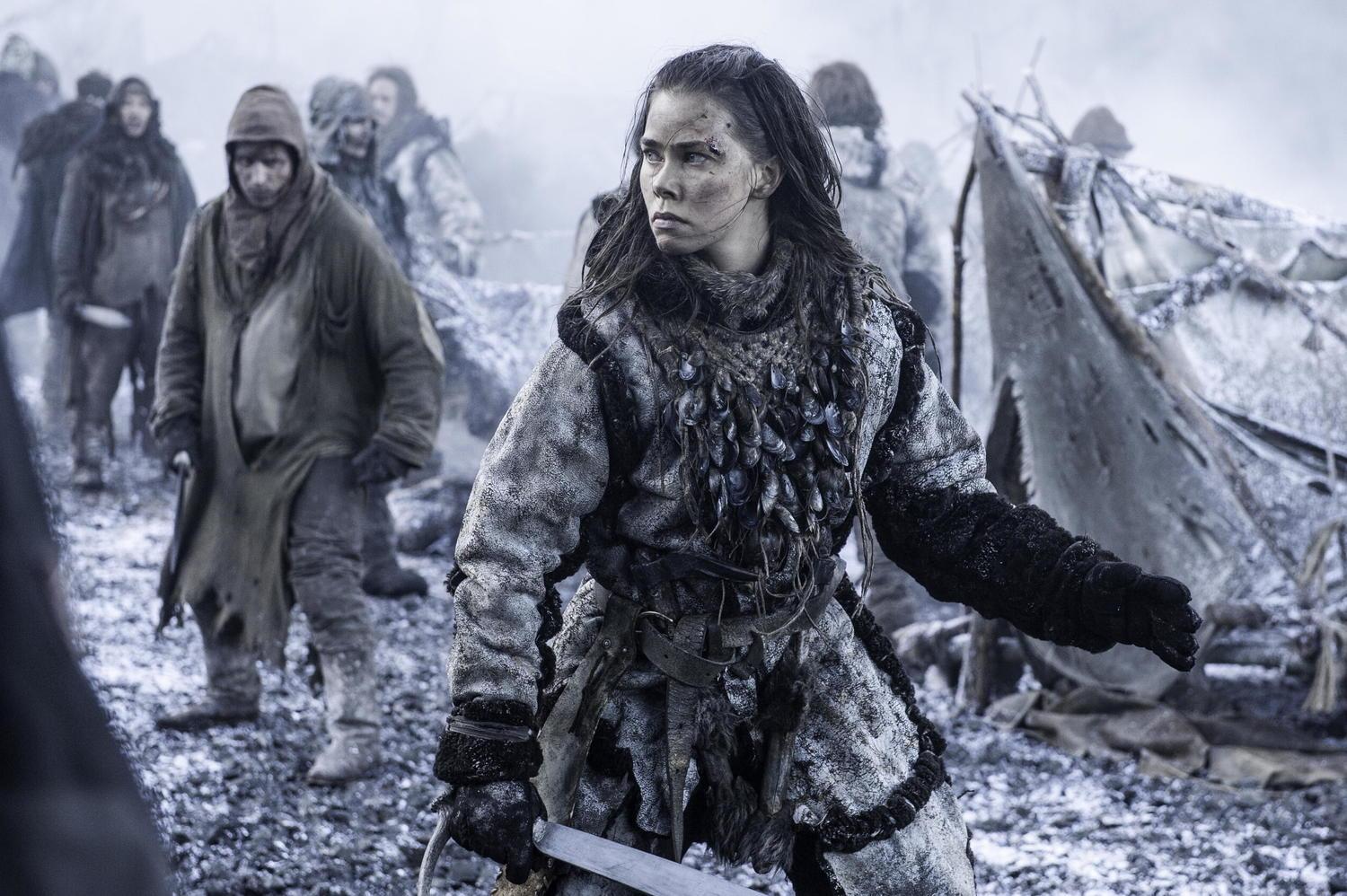 Finally, Jon apparently does know something, which is the power of persuasion. He convinces most of the wildlings to get their ass on the boat and head to the wall. Except for the Thenns, but I’m sayin, getting the cannibal vote is like getting hate groups to support your bid for public office. You don’t REALLY want that shit, fam.

But yo… you know how television works, when someone starts kissing their kids and says, “go on, I’m right behind you” their chance of making it on the boat too is the same as having a civilized disagreement in the comments of a YouTube video. And when the dogs start barking at shit you can’t see… IT’S TIME TO MUTHAFUCKIN’ GO!

People start running but they closed the gates on these cats, cuz Winter ain’t comin’, b. Winter is fuckin’ here. Winter is all up in your personal space like, “you still comfortable? Can I get you something to help you relax?” Winter brought the potato salad to the cookout, like “I didn’t get your invite, so I thought I’d just drop by.” Winter is like, “what up fam, what we drinkin’ on doe?!?!”

Yeah, cats was real tentative about getting on the boat but now this shit look like when Black folk at a large gathering start running and they THINK some shit about to go down.

The dead is on fleek tearing through these cats’ defenses man, and this shit is savage. And these ain’t no slow ass Walking Dead zombies, b. These all the muthafuckas that DIDN’T get killed in World War Z. Walkers out here running like they trying to be drafted off their performance at the NFL Combine.

Jon starts running for the hut with the dragonglass just in time to watch the giant bust through that shit like the Kool-Aid man.

Jon inside looking for the dragonglass, but the White Walker’s starting power forward came up in the spot like, fuck yo dragon glass, b.

He dispatches fuckboy Thenn with the quickness and then comes to collect Jon’s fade. At this point, every Thrones fan is watching Jon get the brakes beat off him and being like…

But after he snatches up his sword and does the Valyrian windmill one time.

I’m sorry, I’m sure I had some shit I should’ve been saying there, but I just spent the last half hour on the phone trying to see who sells Valyrian Steel. Customer service folks were not happy with me, but you know what, this ain’t about them, this is about me getting a Longclaw of my own.

Jon’s small individual victory comes with a cost because the White Waker smashed your boy’s whole right side. And remember that awesome woman wildling commander? She was out here putting in all the work, overtime and all that, but when she saw some undead children, she went soft as cookie dough and let herself be overrun…

…what the fuck, man? I mean, for real, Thrones won’t let us have shit. Her giving up was basically like the Anti-Mad Max Fury Road. That was some ol’ bullshit.

And if that wasn’t bad enough, the White Walkers dumped all their soldiers off the cliff like it was a giant landfill.

Could not have said that shit better myself. If I was in the Nights Watch right now, all I would hear is Kanye’s “Spaceship” in my head as ran my ass off towards the boat. Ain’t nobody built for THIS shit, man. These cats finally get on the boat and the giant is like, I’m good, I’ll walk.

Man, Jon looking out at the camp and realizing just how many folks couldn’t be saved on the shore. And as if that wasn’t bad enough, Ice King Magneto walks out to the shore, just to troll our hero, man? He basically was like, yo, King Crow, yeah, I see you, you pretty bastard. Y’all Southerns Don’t Want No Trouble! Watch what happens when I push this button!

Gotdamn, man. Jon just drifting off on the boat like, “Damn, I really don’t know shit.”