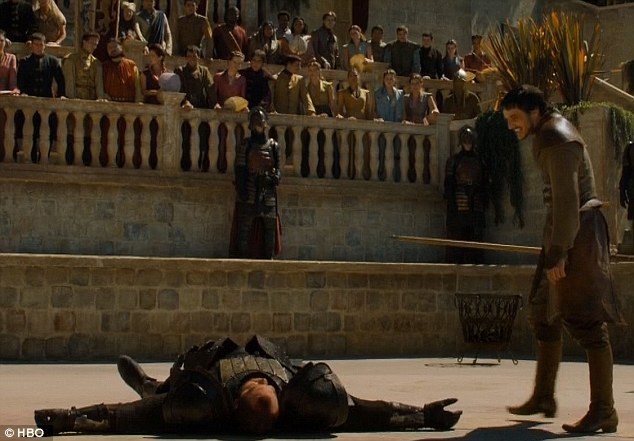 ***Spoilers be splattering on pavement, b***

Go Head Oberyn. The mind be a terrible thing to waste Oberyn. I love how you just put your thoughts out there Oberyn, thinking outside the skull. Box. Whateva

I know, that was cruel. Nobody misses Oberyn more than me, but we gotta own this misery my people or it will consume us all like that big ass snowstorm chasing the Wildlings towards the Wall. I’m just here to help you through it. Ok? We good? Aiight, lets take the top off this recap and head on in…(you know I had to slip at least one or two more in).

As usual with Dem Thrones, there’s often a scene at the end that everyone is like, yo, that shit was incredible and we forget that it happens to be an incredible episode before that incredible thing that everyone will be talking about. Where else can you start off an episode with a woman burping out Bear and the Maiden Fair? Cuz that shit was maaaaaad attractive. I’m bullshittin, but that close to the Wall, that shit probably is sexy as summer wine. Cats be at the bar watching that shit like:

[divider type=”space_thin”]
But you know how TV work, as soon as she start harassing Gilly over her baby’s colic (which be on 9000 by the way), the Wildlings came in with the hard R version of

Ygritte gets her quick work in before finding Gilly with the crying baby and lets them go. If she had Littlefinger’s personality, she might have dropped that knowledge on Gilly like, It’s possible I could’ve had a baby. I could’ve had a baby with Jon Snow. That baby would’ve been too pretty. I probably would’ve smothered that baby. Back at the Wall, word has spread of the raid on the town and Sam is all: 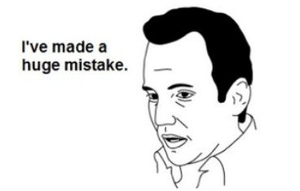 In between Sam’s neurotic moaning and Jon Snow grimacing more than talking, we get reminded these cats got 102 soldiers to defend against like 10K. One Hundred and Two, b! There are more cats standing in line for Jordans that don’t come out for two years RIGHT NOW then there are dudes at Castle Black. How is this possible??? You trying to tell me that enticing a bunch of murders, thieves, rapists and bastards with promises of super cold nights, gruel three times a day, stepping in raven shit and ZERO female interaction ain’t pullin cats off these Westeros streets?

If you skip past this part of the episode, get the fuck out my house.

If you ain’t shippin these beautiful brown peoples, get the fuck out my house.

You better let these gorgeous people live! This shit here is serious, man.

You know when Grey Worm with his lookin ass seen Missandei’s gorgeous self bathing, half of him wanted to keep watching and the other wanted to spin that totem to make sure he wasn’t dreamin that shit.

Naw homie, you woke as a muthafucka. Like Daenerys says about the Dothraki, ain’t no shame to take in the human body. I mean, you comin up out the water like Rambo was a little creepy, but everybody know where your heart is at. It didn’t help matters that Missandei brought it up slow like she was an early 2000s R&B singer. Of course this led to some of the show’s best work with analogies as Missandei and Daenerys breakdown castration. For the record, first one that comes out with a website dedicated to infamous dick pix text messages and calls that shit “The Pillar and the Stones” wins at life. (Also, don’t let me skip that awesome display of Khaleesi, braiding Missandei’s hair. I mean, it don’t equal her running the Narrow Sea railroad and being the white savior, but it was still dope). Grey Worm catches up to Missandei in the throne room to apologize. Lets be clear, for those that indulge that shit, Grey Worm is mister steal your girl. How this cat got this much game and knows like 36 words total? If this cat ever gets time to stop leading an army and cozy up with some Shakespeare, everybody is just playing for second place at that point.

I don’t have a ton to say about Theon travelling to the Moat to coax a surrender from his own Iron Born, except, dude: Give me the ax to the back of the head a million times before the flaying. I seen inside dude’s ribcage, shit was just rude.

Up in the Vale, Little Mastermind is on trial because it was a bit suspicious that crazy ass Lyssa spent such a long time being a non-suicidal lunatic, but decided to take that Olympic Dive out the moondoor as soon as he got there. Slightly. So they bring in Elayne the Simple as their character witness. But you know Starks can’t go ten minutes without name droppin like that dude trying to get in the club with basketball shorts and tube socks. Then she start telling the truth for a while, then she started working that Littlefinger training.

She let them tears hit the floor, gave that nod to Littlefinger like, I got you, b, and that’s all she wrote. Sansa the Useful. Go figure.

Back to Mereen, where the first scene is ominous because Jorah is looking at a map that might as well say “Anywhere but here.” Seems like treachery done caught up to Jorah all the way from season 1 (I love how Thrones be keepin shit in it’s back pocket). Jorah tries to explain himself but the Khaleesi doesn’t even pretend to look for fucks to give.

Daenerys is done playing games. She sent your boy away talkin bout, come morning, I’m taking your dome off and throwing it into Slaver’s Bay (she liberating all these cities and she can’t rename the Bay).

I don’t dwell on The Ramsay / Roose Bolton storyline much, but I will say this. These cat’s ain’t fucking slick man. And I’m talking about the writers. Roose gonna take his bastard son, give him the Everything the Light Touches speech about the North, then make him legitimate? These muthafuckas man. Y’all know this is the scene that Jon Snow was supposed to get with Ned right? Ramsay gettin promotions off of flaying dudes and hunting women in the woods and all Jon Snow got was a nice sword, some warm clothes and a life supply of hair products to keep him lookin fresh against that windchill. These writers ain’t slick man.

We go back to the Vale right quick to get some political survival 101 with Sansa and Baelish. Take that Sansa-Haters. Y’all can’t say shit when she came down the steps lookin like Maleficent’s niece.

As for the Arya learning her aunt had just died after all she has been through, all I got is this:

Nothing else needs to be said.

As you all know, the Jaime / Tyrion scenes are my favorites on the show and they NEVER disappoint. As they remember the old story of Orson Lannister (who had been dropped on his head as a baby), we get a perfect caption for the differences between the brothers. Jaime doesn’t give a dusty fuck about beetles. Tyrion wants to know everything about everything. Somewhere in the Klunk, Klunk, Klunk, Tyrion assumes that there is a method to the madness. But that’s the point of Thrones. It’s the reason why Oberyn dies a horrible death when we think he has won.

It’s the reason Ned became a foot shorter on Joffrey’s command. It’s the reason Catelyn was beaming with pride at her son’s conquest before they filled ya boy with the same amount of arrows Leonidas got. Ain’t no reason in this shit. There is only the “Want to.” Orson Lannister killed beetles because he wanted to. Shit don’t play out the way “it should.” It only plays out according to whoever has the will to make something happen. The Mountain had a spear in his stomach and he had the will make Oberyn real quiet when he was talkin all that shit. That’s what makes this show great. It takes every trope you’ve ever learned from all the fairy tales, TV shows, fantasy novels and tells you to go fuck yourself. Think of all the abuse, you, as a viewer have taken over the years with this show. But your ass is watching next week, ain’t it?

So, as we pour out some of that good Dornish wine that Oberyn brought on his trip to King’s Landing, I at least want to leave you with a few lasting images of him at his greatest, before the Mountain made it clap on your boy. We’re back next week for what looks like an episode that is about three years in the making as Jon Snow and that Bastard Swords finally have the showdown against Mance Rayder at the Wall. See you then.