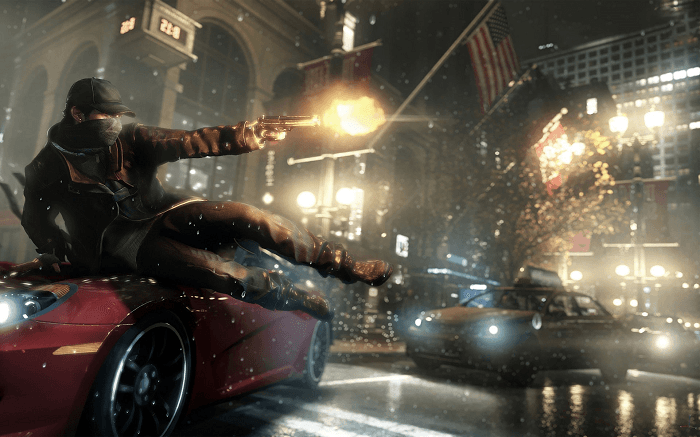 Story – Compared to other AAA over the past year (Bioshock: Infinite, Last of Us, Tomb Raider, GTA) the plot is real linear as it’s just a straight up revenge story.

Soundtrack – S/o’s to Cudi, Vampire Weekend, & Smashing Pumpkins for getting cut a check for their music to be featured in the game. Unlike GTA the radio station has no structure as everything plays seamlessly on one station with the ability to skip tracks but I found myself being annoyed & actually turning the station off due to the soundtrack being rather short & missing better music. I can only hear 2 Chainz struggle over some pristine Pharrell production for so long before I have to say “yeaaahhhh…no” & cut the radio off.

Aiden – Now of course our antihero has the best character design in the game but my gripes with Aiden are based on the fact that so far he’s kind of boring. No information is giving about Aiden’s origin so it’s hard to give a feel or even care about him. You look at other video game protagonists such as Nathan Drake whom Naughty Dog chose to incorporate his personality in the midst of all the action segments & Aiden plays the polar opposite. Aiden either talks via voice over or during phone conversations. Also Aiden almost always has his phone in his hands (we can all relate) which can be an annoyance after a while. I would rather his hands be free so he can you know…punch civilians, in which the game doesn’t give you that option. Also running is tedious as Aiden seems to only have one speed which can be aggravating when you need to chase down a perp.

Driving – Now everything bad that you heard about the driving in this game please believe that a hands on experience is much worse. The cars have so much weight to them that it’s difficult & tedious just to drive down the street. The driving really gives you an arcade feel but yo..I paid $60, if I wanted to play an arcade driver i’d go to the arcade & pay arcade prices. The game doesn’t give you any tutorials or a grace period to practice your driving the game basically throws you to the wolves and haves you fend for yourself against the cops.”

Two highlights from my play period

1) Me pinballing down a busy intersection, crashing everything from side to side as I fail to gain control.
2) Me failing to brake on a motorcycle & hitting the car in front of me blasting him 3 feet as I stayed on the bike unharmed.

Like Diddy the brakes in this game can’t stop, won’t stop. I recommend buying the focus skill in the skill tree which gives you like 5 seconds of complete control over your vehicle (think Franklin from GTA)

Shooting – Great cover system but the recoil on the weapons in this game is just too much. I know I’m not the best shooter but I know if I’m aiming straight at a dudes noggin the recoil shouldn’t be that bad where when I finally pulling the trigger I’m shooting around him. Can’t have realistic shooting with arcade like driving. That seems ass backwards to me.

Profiler – Very nice touch. You’ll be able to gain info on everyone in your surroundings. Whether someone is forging artwork, having an affair with a married man, or are back on their student loans you’ll know about it which I though was cool & brought personality to the city.