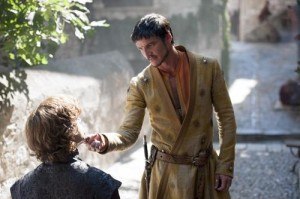 Aiight, so uh, Game of Thrones is back and of course, Lannisters come back to remind us that they got No Chill whatsoever when in the first scene, they are melting down Ice, Ned Stark’s Valerian Greatsword…

I’m sure there’s some impotence joke about Tywin being older and needing to compensate with two Valerian swords for the fam, but I digress.  We also got to see, that creepy shit back again with “Leans to the Left” Jamie Lannister trying out his new conversation piece in the form of a golden hand on Cersei Baratheon (Lannister). You know her, the Queen Regent.  Or, ya know, his sister.  Y’all remember that right?  I mean, its been a few seasons since we’ve SEEN it, I just wanted to make sure you didn’t forget that for years Jamie was fucking his sister.  Ok, we can move on now.

Of course Cersei gonna act all uppity because Jamie is rockin King Tut’s sarcophagus on his right arm; like the royal tail ain’t available now.  Like she ain’t about keepin it in the family anymore.

This was a pretty damn good episode with the two big standouts: the introduction of Oberyn Martell The Bastard Seeding Based Gawd and the buddy cop adventures of Sergeant Hound and Detective Arya “Needle Work” Stark.

First, Oberyn was cast perfectly. He even resurrected the gorgeous Indira Varma to come back and have dominatinon sex with everyone in King’s Landing.

Of course, judging by her runs on Rome and Luther, she may not want to bring her luggage into the Red Keep. Seems like a waste of time for her. The Red Viper heard that Rains of Castmere jingle being sung in other room and he’s was like, yo, these Lannister’s ain’t gonna stab themselves, b. Since I know what’s coming up and I might be spoiling current TV episodes, I’m not gonna spoil what happens next except, you’ll be seeing plenty of the Red Viper.

Then we got the Hound and Arya rollin up on the Mountain’s men cuz Arya now got that, ‘these cats done killed my whole family’ No chill goin. The Hound tried to keep his with the MOST TALKATIVE MAN IN WESTEROS before he got fed up and was like The ‘bitch’ in question of course being the pre-teen psychopath Joffrey. Then shit gets wild and the Hound start taking cats apart while Arya chillin in the corner chargin up like Ryu.

When it was all said and done, Arya killed a man slow, got Needle back AND a pony, and she ain’t even 16 yet.

Lots of other good, yet brief moments. Cats thirstin after Khaleesi (can’t be mad at that, she got dragons yo) and John Snow’s being the smartest cat in the room when the Night’s Watch tried to act like he ain’t just climb the wall and then gut a Warg to get back. And oh yeah, Cannibals…And fully, we ain’t skimpin on the CGI budget Dragons. Look at you HBO, wearin your big boy pants and shit.

Again, excellent episode, but if the previews are straight up, the wedding between Joffrey and Margery is next week? Next Effin week? Naw, I’m not ready.