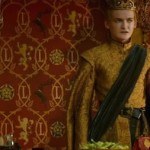 “Not so pretty now.”

Welcome to Joffrey and Margery’s Wedding plebs, or as I like to call

THE NO CHILL OLYMPICS Cats were tossin that shade around like they were getting scored on that shit by the judges at table assignment #8. AYEBODY could get it at the wedding, and the master of not giving one negotiable fuck was Joffrey…I know you want to talk about it, but not yet…

What gets lost with these huge momentous episodes where someone really important dies, is that its often forgotten how great the episode was BEFORE someone got that express pass to one of the 7 hells (or only one, if you let Melisandre spit her shit). And this was a great episode before Joffrey started spittin them choke bars. That hot poison 16. That Kendrick Lamar Control Foam at the mouth, that,…yeah, you get the point.

And lets not forget Dragonstone to check in with Stannis for the first time this season. You can always tell we’re in Dragonstone because they are always burning a muthafucka alive. Yo, the Night is dark and full of the smell of Human Barbecue. Cats get put on the spigot just for waking up in the morning under the Red God, I swear. Melisandre is the Texas Governor version of Westeros. She return cats to the earth on the daily. Unfortunately, she might not even be the craziest person on the island. Stannis is a cold piece of work, but his wife is one true God over the Cuckoos nest.

And you thought he was crazy for straying and puttin them puff puff pass seeds in Melisandre. Sheeeyet.

Again, I know you want to talk about that last scene, but we ain’t there yet…

Back in Kings Landing, before and after the wedding, you had some great scenes with Tyrion and Jamie (you lost a hand, not a stomach), Jamie and Bronn (If you use an edged sword, then I’ll have to use an edged sword and then I’ll have nobody left to pay me) and of course, Tyrion and Shae. Fa real, Shae be on that Zero Chill 30 and think she made of adamantium the way she be talkin. Tyrion had to hit her with the “Now look what you made me do!” speech.

At first I thought Joffrey gonna at least possess some chill when he had the great line of acceptance when Tyrion gifted him the book. But that was before the bastard got a Valerian sword in his hands. Yeah, it was all Shade, all the time after that. You had the Loras / Jamie back and forth (“You will never marry her” / “Neither will you”)

The Absolutely singular Brienne getting crushed by Cersei. Because she don’t like nobody falling in love with her sex partners, even if it is her brother. But my favorite was the Oberyn face off with Tywin and Cersei. They started out with little jabs, but at the end of that convo, they took subltety by the ear, drug into the throne room and shot a quiver of cross bolts into it. Had to love these:

Ok, I’ve delayed long enough, after Joffrey said about every bad thing possible (I feel like I’m cutting Ned Starks head off all over again), he finally went to Team Terrible afterlife after doing his best to humiliate Tyrion. And I know cats was happy for a second like

But that shit quickly turned when with his last punk ass boy king breath, he accused Tyrion for killing him. Even in death, this cat has no capacity for chill.

So we look forward to next week and the coming trial for Tyrion, but here are my top 3 things that could’ve been said that would have been completely inappropriate after Joffrey died:

3) Is Widows Wail the name of the sword or Margery Tyrell’s nickname? AmIrightOrAmIright?

2) Just so we’re clear: We should stop eating the cake or drinking the wine?

1) Hey, band, you cats know how to play Rains of Castemere or nah?