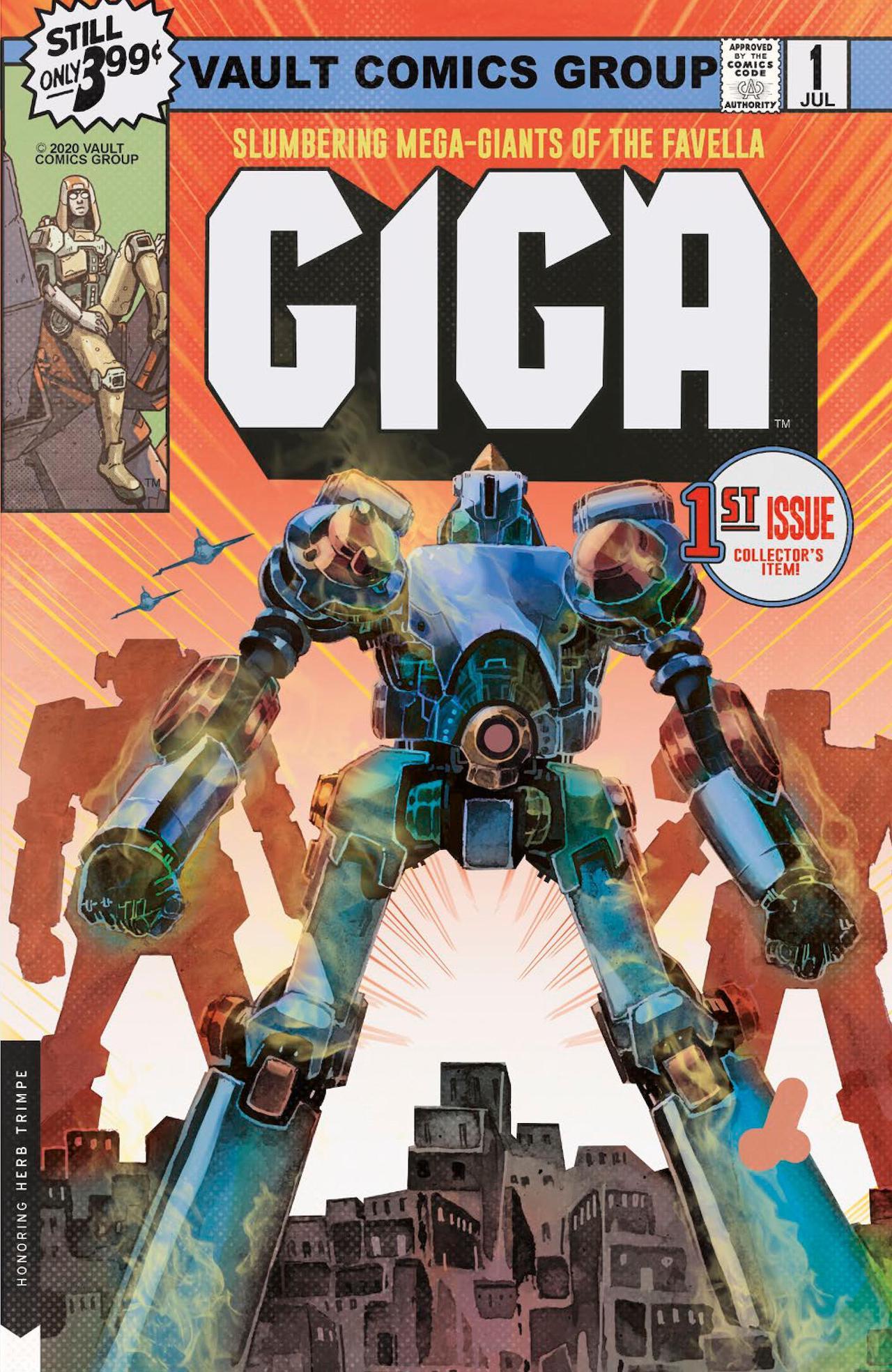 It is a well documented fact at this point that I love robots. As someone who grew up absolutely fascinated by Mobile Fighter GGundam on Toonami, the giant fighting robot genre is one that I am absolutely enamored with. Aldnoah.Zero? Here for it. Gurren Lagann? You know it. Pacific Rim? Quite easily my favorite movie ever and I watch it every year on my birthday because that movie makes me happy and the guitar riff is just pure serotonin. There are dozens more that I could wax poetic on and on about, but today we’re here to talk about the highly anticipated Giga, which I’ve seen much hype on my side of comics Twitter and I’ve been dying to get my hands on the first issue, and folks, it very much lives up to the hype.

Giant robots are ultimately just set pieces in a story. Contextual entities meant to fulfill some grander purpose within the narrative; whether it is to stand in for the literal representation of military prowess or the metaphorical representation of a character’s self esteem. And much like how we have a wide range of superhero movies, there is a wide range of giant robot stories, and Giga feels like it’s injecting new life by coming in a bit more forwardly philosophical approach.

The opening pages of Giga #1 show a group of ‘Novices’ being taught about the “Book of Assembly” and the vast and vague religion that surrounds the robots in this world. Lê’s artwork shows carved murals of several hulking machines as Paknedal muses about the world through the principal character, Evan.

Evan opens the story proper by positing that humans and mechas live in a pseudo symbiosis, where humans are akin to the microbial organisms that help us function. And it’s not exactly a new concept that machine and human work together in harmony, but the presentation of the concept feels like it has that much gravitas when told in this mythologized format; where some priestly figure is explaining the doctrine of the “Kindness of Iron.” It’s that type of poetic language that draws you into the world of Giga.

Then there’s a time jump. We see more of the world in a drastically different light, removed from academic pondering, and shifted into the harsh realities of a rusting world, anchored in the view point of a POC in a wheelchair. Evan is a self-sufficient and smart character who finds himself trying to untangle the mystery of who would destroy a Giga, considering that they are essentially small towns and essential physical gods to the people. It’s the type of story that’s ripe with lore and so many possibilities revolving around this technophile cult and the history of the old wars.

This is a comic where you can feel the synergy between the writer and artist. Paknadel’s writing is on point and engaging on every page, and Lê’s panels are absolutely breathtaking and help convey the sheer magnitude of the story. The Gigas look incredible and the character designs are memorable and I just want to spend all of my time in this world. This is the type of story that fans of the giant robot genre will adore without equivocation and for everyone, it’s gonna make them fans of the genre. This is a fantastic opening to what I hope will become a very longing running series.