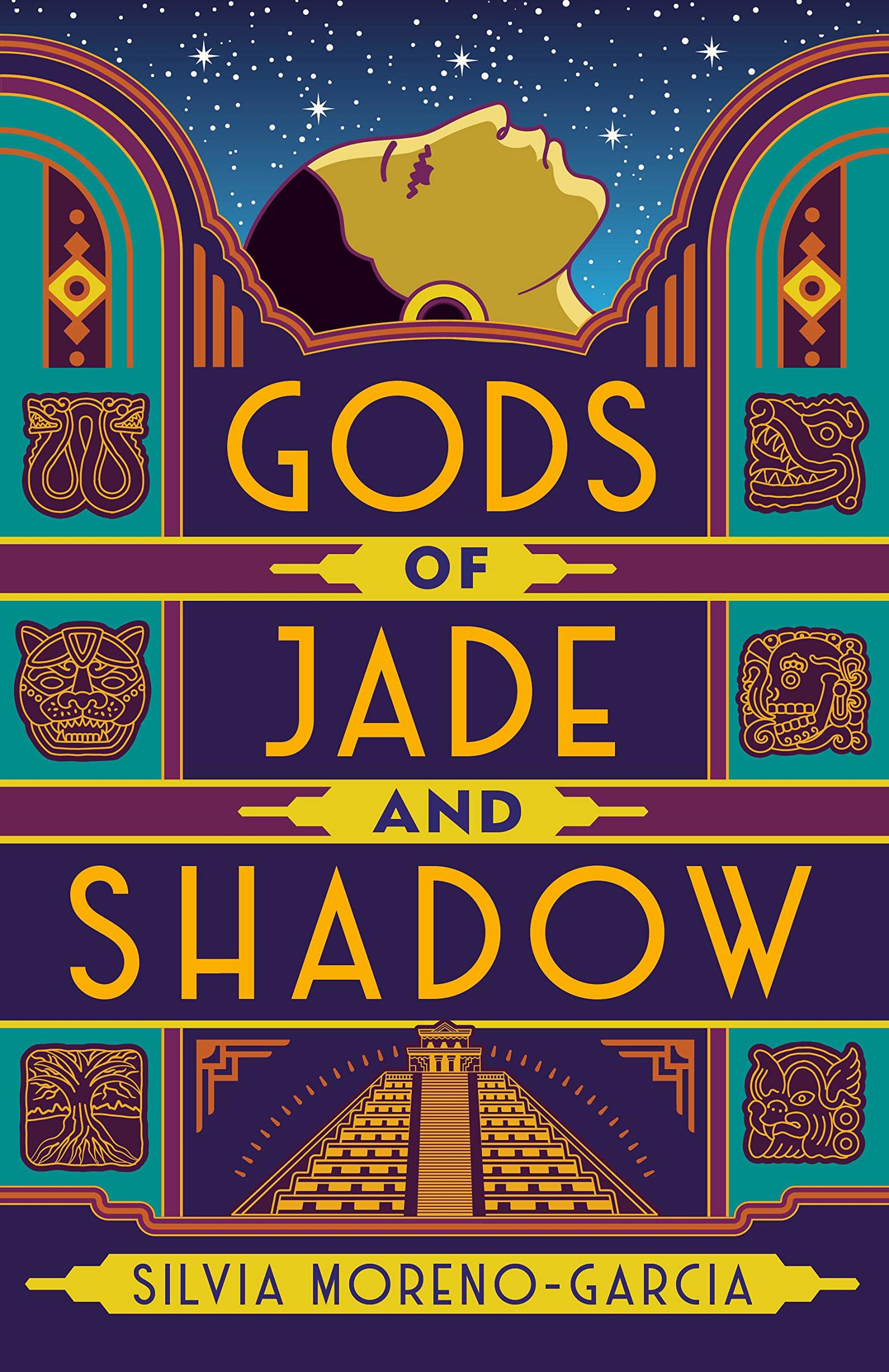 I finally had the time to read Silvia Moreno-Garcia’s Gods of Jade and Shadow when I was on vacation. While on a cruise, it took me three nights to devour it. Each night, after a full day of activities and sun, I’d find my way back to my cabin, wrap my hair and tuck into bed with my Kindle. I’d also find myself reading into the early hours of the morning, foolishly telling myself “Just one more chapter!” Then I’d doze off, aided by the back and forth motions of the ship as the pitch black waves nudged it along under the sky.

Let me tell you, upon reading just a handful of pages, I sighed. Reading Gods of Jade and Shadow was like meeting up with an old friend after a while–a comforting, ecstatic feeling that fills you from the inside out. Truthfully, it hasn’t been so long since I’ve read a novel from Moreno-Garcia. I filled my glass with The Beautiful Ones not too long ago and before that, I did a reread of Certain Dark Things. Yet her newest offering, which has been described as “Mayan mythology meets Jazz Age odyssey,” is a breathtaking read that had me alternatively on the edge of my seat and in awe. 2019 has taken so much from many of us, has dealt so much damage. A book such as this is a welcome read, a soft of elixir in dark times that leave us hopeless when we’re already near rock bottom. It has certainly won its place on the list of my favorite books of the year. 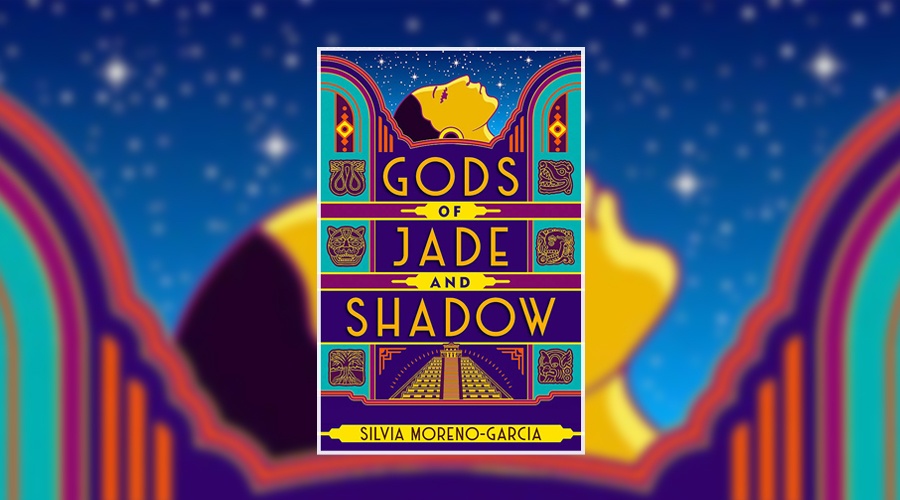 “Some people are born under a lucky star, while others have misfortune telegraphed by the position of the planets”

I’ve always adored fairy tales and folklore and that love has carried on to my adulthood. So this tale was one I wanted to read for sure. Our heroine, a young woman named Casiopea Tun who may have been born under an unlucky star for all she knows, is wasting her youth away in her grandfather’s house. Doing laundry, cleaning floors and overall being treated like a servant without much regard. She’s a survivor with a quiet fire within her that refuses to be extinguished as day in and day out she endures cruel words and a beating here and there. She, with her skin not fair, doesn’t fancy herself as a Cinderella type but dreams of life–of being able to truly start living her life free from her grandfather’s house – that doesn’t feel like a home despite his wealth – and out of the dusty, little southern Mexico town.

The Jazz Age is in full swing, and Casiopea wants freedom, to drive a shiny automobile, to go dancing, to travel, to wear pretty things, hell to be able to have a day off. She’s been living in the suffocating presence of those she calls her kinfolk for way too long. Even the relative closest in age to her, her cousin Martin, is a horrid excuse of a human being who thoroughly enjoys his status of being the next (undeserving) head of the family. Martin reminds her of their respective stations every day. Her life takes a huge turn when, as a punishment, because she was too mouthy, she’s left home. She’s left behind as her family leaves on a day trip. Casiopea snoops around in the bedroom of her ornery grandfather to find that he’s left his most prized possession behind: a mysterious wooden box with intricate Mayan artwork and a key he rarely takes off. In opening this chest, she sets herself on a journey where she’ll see sights brighter than many a star and end up changing her own destiny: she accidentally frees the spirit of the Mayan God of Death, who requests her help in recovering his throne after being betrayed by his brother.

“That he smiled now because he was dislocated, altered and altering, and due to the mortality creeping in his veins.”

The Mayan God of Death, whom we learn is “Prince of the Starless Night, Firstborn of Xibalba,” gives Casiopea the name of Hun-Kame’ to refer to him by and is an imposing force. Both girl and God are linked, their destinies tied together as their lives depend on each other to make the trip. Casiopea, named after a constellation by her kind-hearted, poetry-loving, dead father, is doomed if they fail, and if she succeeds she is promised her heart’s content. Unbeknownst to her, if they fail, the God braced in the flesh will face a different kind of fate. It is a different type of death, yet one that is far more ideal than her end. It is absolutely fascinating to see these two on the pages, traveling together, experiencing the cities together and meeting all the supernatural bumps in the night together. It’s a visual hourglass of The God becoming more and more human and the girl losing more and more of her life force and what makes her, her.

It is a treat to read this story in this time period: our traveling duo moving through a plethora of locations and places starting with a more rural town to Mexico City all the way to California to darkness of the Mayan underworld. I personally believe that Hun-Kame and his human guide are passing through a world that is knee high in the Roaring Twenties where the women are throwing fashion and society’s expectations of how a woman should look on their heads with short hair and daring dresses. There’s a boom in technological advances and automobiles are seen and driven more, especially in the cities. There is a love affair with Hollywood and the film industry and its decadent influence is seen nearly everywhere. It’s a new age and the God of Death is in a new body, experiencing much of this for the first time with young Casipoea.

“Ah, there is none more fearful of thieves than the ones who has stolen something, and a kingdom is no small something”

Moreno-Gracia did such a superb job with her characterizations of not just our main two characters who are connected by fate and duty. Throughout the book there are plenty of others that have a rich presence. The unlikely duo have to meet with a handful of different persons belonging to the supernatural world. These beings linger in the earthly plane and each encounter brings something new: violence, introspection, gifts and advice. While some are less volatile, each new being is an interesting character with their own motivations and desires. They have been hiding in plain sight and molded by their circumstances of the new rule after Hun-Kame was dethroned. My favorite of these beings is Loray. Loray is a green-eyed individual whom our destined two meet first. He has honeyed words and a youthful appearance but eyes that immediately suggest otherwise. He makes a hell of a first impression. It is with his help the two make some actual headway on their journey, and Casiopea has her first real clue on how she might survive this ordeal.

This brings me to Casiopea’s foil in this adventure, her bitter and awful cousin Martin, who ends up on a collision course with her. He’s just yet another pawn in this game set by the Gods. While I wished to have less of him and wanted more of a focus on the maiden of the tale, I did understand while the author featured him in any capacity at all. He too, plays an intricate part…and the cousins’ final meeting is a gripping one that displays all the graces and maturity of a character written right. This young woman written by a pen that ensured she’d have a full and generous, yet hard won, character arc: developed to an t. I am very impressed with the natural progression of the relationship between Casiopea and Hun-Kame. I’ve read a few reviews where others “couldn’t get into it” or felt it wasn’t paced n a way which felt authentic. I couldn’t disagree more–it doesn’t happen overnight. Stone-faced declarations, awkward conversation and plenty of eye-opening conversations happen between the two as Casiopea makes more and more sacrifices and Hun-Kame becomes softer and softer.

It's because in Spanish we say "lo siento mucho," which means "I'm sorry" but literally means "I feel it a lot." It's empathy first and foremost. https://t.co/1LrlsFj8PD

“She knew this story, and it must have a different ending…It was the treacherous weight of mythmaking, of patan, that pulled her up, made her push back

There’s a thrilling final bet by the Gods and even the climax doesn’t come without a twist. I didn’t see it coming and the way it ties into Mayan folklore just places a bow on everything with such a flourish! I am in awe of what Silvia Moreno-Garcia can do. I wept hard while reaching this section of the book and the ending that followed. There’s a thread of being responsible for the world, even if you’re the only one with a sense of duty who remembers that it has to be done. Entwined with that, is knowing that fixing what went wrong means not perpetuating cycles: be it violence, or generational strife.

Gods of Jade And Shadow is a brightly colored affair with that touch of seductive darkness Moreno-Garcia is known to artfully employ in her writing. This novel is a heartfelt offering of placing yourself, placing those who look like you, on the page in a respectful and genuine homage to your heritage that is as entertaining as it is impactful. Also included was the idea that adapting to the new times can be ill-advised, or even dangerous when the wrong person for the job is at the helm. This proved to be a novel that is as engaging as it is heartbreaking, with that very element of darkness and characters that leaped off the page with their personalities and desires.

With each page that brought me closer to the end, I mourned. Yet I wouldn’t dare stop reading and be left wondering who made it to the Black throne and whose life was forfeit. I wouldn’t mind taking another trip, being on another ship with this book close to my heart. I wouldn’t mind re-reading this odyssey that had everything from the bright lights of Mexico City to the darkness of the Mayan underworld. I wouldn’t mind being rocked to sleep by waves big and deep again, with my eyes too heavy to continue reading of the young woman who dared to live and who dared to not give the God of the Underworld his new heart’s desire.

See this essay Moreno-Garcia wrote about some of the places that inspired the locales of her book.