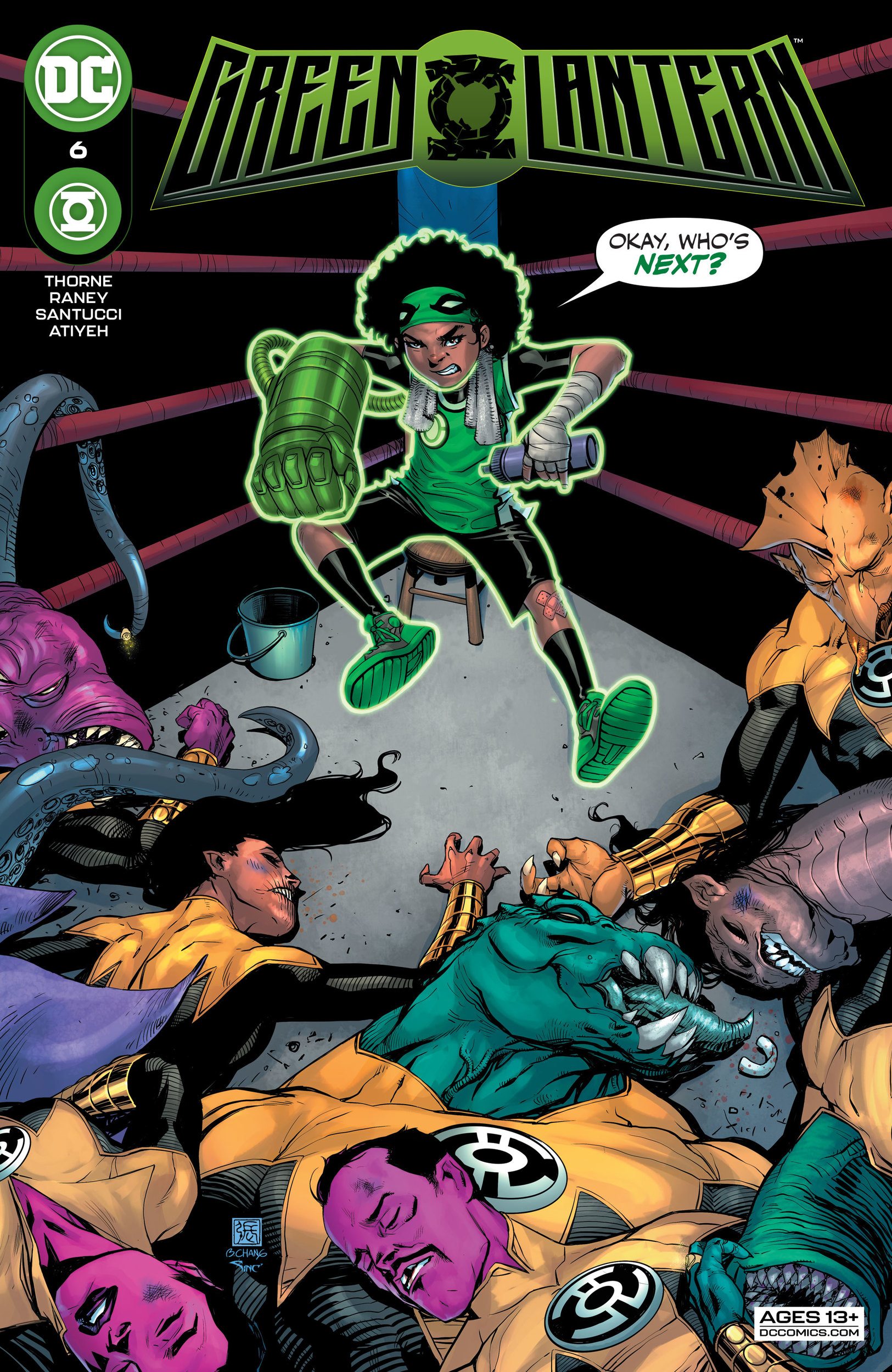 Thi Green Lantern book continues to be pretty solid, and despite the title of the series suggesting a singular character, six issues in, we’re still splitting our time with a select few Lanterns. I’m happy to say that the two we get the most quality time with are Jo Mullein and John Stewart. They’re without a doubt the reason I keep coming back to this book.

At this point, the book’s formula is pretty apparent. Half the issue is with Jo Mullein, and the other half is with John Stewart. They both are dealing with drastically different conflicts that spin out of the same inciting incident: the Central Power Battery’s destruction. We’ve yet to see if there will be any crossover between them, but for now, I don’t think it matters. I think it’s gonna be pretty epic when they do inevitably come together, though. Black excellence in space. I can’t wait.

Green Lantern #6 follows Jo Mullein as she confronts Sinestro and his Corps in the midst of an attack from a fragile and unhinged Teen Lantern. During their conversation, the two have a battle of the wits as they both try to one-up each other with their intellect. Sinestro, ever the sly guy, can’t get one over on Jo. She’s always a step ahead of him. But despite his history of shaky allegiances, it’s looking like, at least for now, what is left of the Green Lantern Corps won’t have to deal with Sinestro and his Lanterns.

What is a shocker (or not if you’ve connected the dots over the past few issues), is that Jessica Cruz is now part of Sinestro’s Corps. It’s something that I think people might have wanted to see for a while now, especially with Cruz’s relationship with her agoraphobia. But what makes the dynamic more nuanced is the split it creates between Cruz and Simon Baz, who is already dealing with the loss of his ring, and his physical abilities in general, as he was caught in an explosion on Oa when everything popped off.

Simon Baz has had a rough few months. I think he needs a hug.

No matter how dope Jo Mullein is, and how convenient it is that her ring isn’t connected to the Central Battery, it still only has a finite amount of juice before it needs to be recharged itself, and in this issue, we were painfully reminded of that. I’m sure just like in Far Sector, that will be factored into the conflict of the story to raise the stakes.

Things are slowly setting up to come to a head in the next few issues. Sinestro affectionately and accurately called Jo Mullein “Last Lantern” during their confrontation, and while it’s accurate, and dope as hell, I hope it doesn’t spell too much danger in Jo’s future. At least not before she can meet up with some of her other Oan homies.

9 Rooftop Conversations out of 10