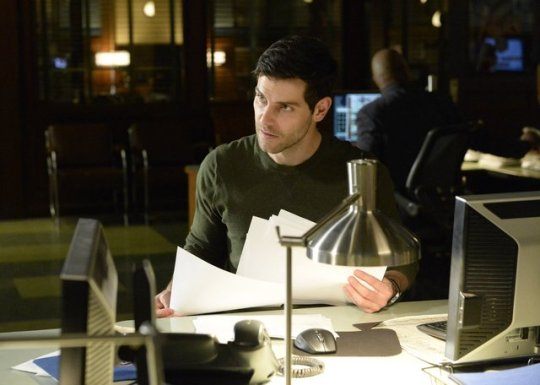 [quote_simple]“Sleep is good, death is better; but, of course, the best thing would be to have never been born at all.”[/quote_simple]

The twitchiest man in Portland, Dan, walks into a hotel-style apartment building out of the Portland night only to be met with a warning from the manager about keeping the noise down in his room tonight. Before he can get to his room, his neighbor comes at him with the same STFU warning. I don’t know what Dan has been doing in his room, but clearly it’s been loud.

The second Dan gets inside his room, he starts locking it down: deadbolt, chair wedged under the door knob, windows nailed shut, literal chains across the windows. My dude clearly is afraid of something and that explains why he sleeps clutching a hammer. He lies down and goes to sleep and that’s when the Wesen attacks. It has a huge mouth that opens like a flower except it is lined with teeth that glow green. Dan wakes up, but can’t move.

At the loft, Nick sneaks out of his room (the room he shares with Adalind) and walks past Eve (who is fake sleeping on a cot) to go to the tunnels. Of course Eve follows him. He’s taking pictures of the drawings. Still, no one has figured out what they mean. Eve throws in a not-quite-stab-mostly-I’m-sad-I-lost-my-powers-and-my-Nick comment about Diana being able to see more of the symbols on the cloth than she could. Ouch. So this whole Five’s Company situation isn’t getting less awkward.

In the morning, at the hotel, Dan wakes up pissed and frantic and disoriented. He walks straight out of the building in his undershirt and boxers mumbling to himself about how it possibly could’ve gotten in his room. A good Samaritan sees him and tries to help him. Dan kills him via traumatic head injury because Dan thinks, mistakenly, that the man might have something to do with his midnight attacks. At the Spice Shop, Nick, Eve, Rosalee, and Monroe are looking at pictures of what Eve drew on the tunnel walls trying to make sense of it, but all they figure out is that it’s a hodgepodge of languages and symbols. But then they find a symbol linked to the Pleiades constellation.

Nick has to leave because he still has a day job. He and Hank pull the hotel homicide. After seeing the body, they quickly get a lead on Dan. They arrive at the hotel to hear him hammering the door shut. They break it in and arrest Dan who is still covered in the dead man’s blood and screaming about “it” getting to him. Dan gets hauled off to the precinct while Nick and Hank question the manager about Dan. He’s not particularly helpful – just where Dan used to live, what he was like, etc.

At the precinct, Renard is visited by Anselmo Baledin, a Black Claw big wig, who wants to talk. Renard seems to be done with Black Claw and essentially kicks dude out of his office after Baledin questions him a little too much about Bonaparte’s death, “the Grimm” still being alive, and just in general how all the Black Claw’s rule-the-world plans went astray.

While Nick is at the 9-to-5, Eve, Rosalee, and Monroe continue working on deciphering the symbols. Identifying the Pleiades leads them to identify other planet/constellation symbols. They think it could be a calendar — but of when?

Hank and Nick’s investigation reveals that Dan has no criminal record or history of mental illness. That has them wondering if whatever is going on with him just started. Only one way to figure that out, so they interview him. That ends in him screaming incoherently, but not before he describes being paralyzed in his bed as it comes for him with its disgusting breath and huge mouth. So now they have something to look in the books for.

Eve, Rosalee, and Monroe are still working on the calendar theory when Hank and Nick arrive looking for that Wesen database. Turns out that Monroe had a personal run-in with an Alpe. One fed on his Aunt Ada. Fed? Yes, fed on the proteins the brain makes during sleep. Problem is that if the Alpe feeds on the victim for too long, the victim goes insane. So now they know what happened to Dan, but not who the Alpe is. And since there’s 35 residents of the hotel, not including employees… this won’t be easy.

They uncover that there have funny goings on in the hotel since 1954 including psychosis, suicides, and accidents. They interview the owner, Beverly Garwood, who inherited the hotel from her grandfather. She seems mostly concerned with her liability.

With Dan gone, the Alpe needs a new victim. Remember that neighbor who was yelling at him to keep it down? Yep, it’s her on the evening menu. At the precinct, Renard is still being haunted by Meisner except usually ghost who haunt you don’t warn you about men waiting by your car to kill you. So I’m not sure what Meisner is doing, but he’s dead and he’s not resting in peace. What I’m sure he’s doing is helping Renard kill two dudes in an underground parking facility.

In the morning when hotel victim number two, Laura Driscoll, wakes up, she is disoriented and panicked and not looking where she’s going when she stumbles out of her room and that’s how she ends up falling to her death over the railing. Nick and Hank interview the manager and maintenance person, but they aren’t much help. In Laura’s room, they find evidence that the window had been previous nailed shut. Seems like the hotel has been a buffet since at least 1954. So they decide that the best option is an undercover sting using — you guessed it — Monroe as bait. Rosalee objects BECAUSE OF COURSE SHE DOES. She’s carrying a litter of babies and her boo is about to be bait for a dangerous Alpe that’s been conniving for decades? No. Nope. Nah. But he does it anyway because being friends with Nick makes you bad at decisions. Monroe agrees, checks into the hotel, and sets up a camera on the dresser across from the bed so that Nick and Hank can see the Alp before it gets a chance to attack Monroe. You have to know that somehow the camera gets knocked over before the Alpe attacks which means that Monroe ends up paralyzed, but they do interrupt the attack. The doors and windows were still locked and the camera seemed to fall off the dresser for no reason. That’s how they discover the secret tunnels behind the dresser. They head in and end up in a room with the manager who woges (Hundjäger). Long story short, Nick snaps his neck during a fight because he thinks that that’s the Wesen that attacked Monroe.

Monroe arrives like “WTH, I said Alpe” so all three of them head back into the dresser tunnels and end up in a lavish apartment. Beverly Garwood rushes out of a darkened room on some “OMG! What are you doing here? I‘m calling the cops!” But since the cops are already there… they confront her about being an Alpe.

She’s pulls the “it’s so hard to be an Alpe” card, immediately followed by “also, being an Alpe isn’t a prosecutable offense.” But Nick wipes the smile off her face by reminding her that he’s a Grimm AKA Decapitator so she can sell the hotel and leave or he can go Grimm all over that ass. She agrees to move, but then rushes at him (worst plan ever) and slips and falls and dies when she cracks her skull on the corner of a table.

At the Spice Shop, Rosalee and Eve are still trying to figure out the calendar. Rosalee puts the data (yes, it was just this vague on the show) into the computer and tries to match the drawings on the clothes/walls to the position of the planets, but the further back she goes the more awry it goes.

Funny story, when she went into the future (March 24th) everything aligned perfectly. Welp.

I have so many questions: What should I be wearing on March 24th? When is Rosalee gonna fight Nick for constantly putting her partner in these uneccesary situations? Where does Meisner go when he’s not haunting Renard? Is he haunting Renard? If the writers wanted us to believe that being a hexenbiest chages your personality and that’s why Eve went evil, then why is Adalind still the happy homemaker version of herself when she got her powers back a long ass time ago?