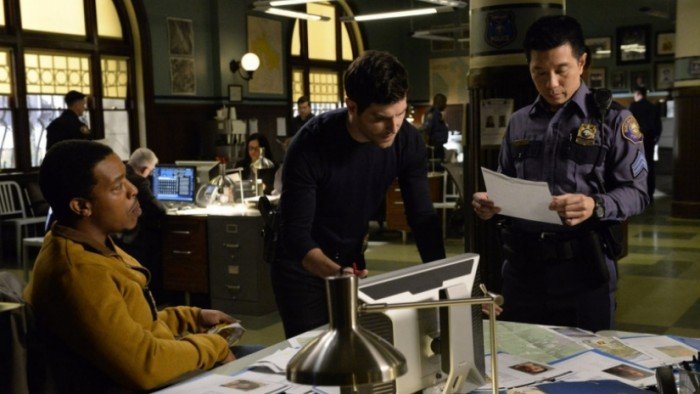 [quote_simple]“In the morning glad, I see my for outstretched beneath the tree”[/quote_simple] 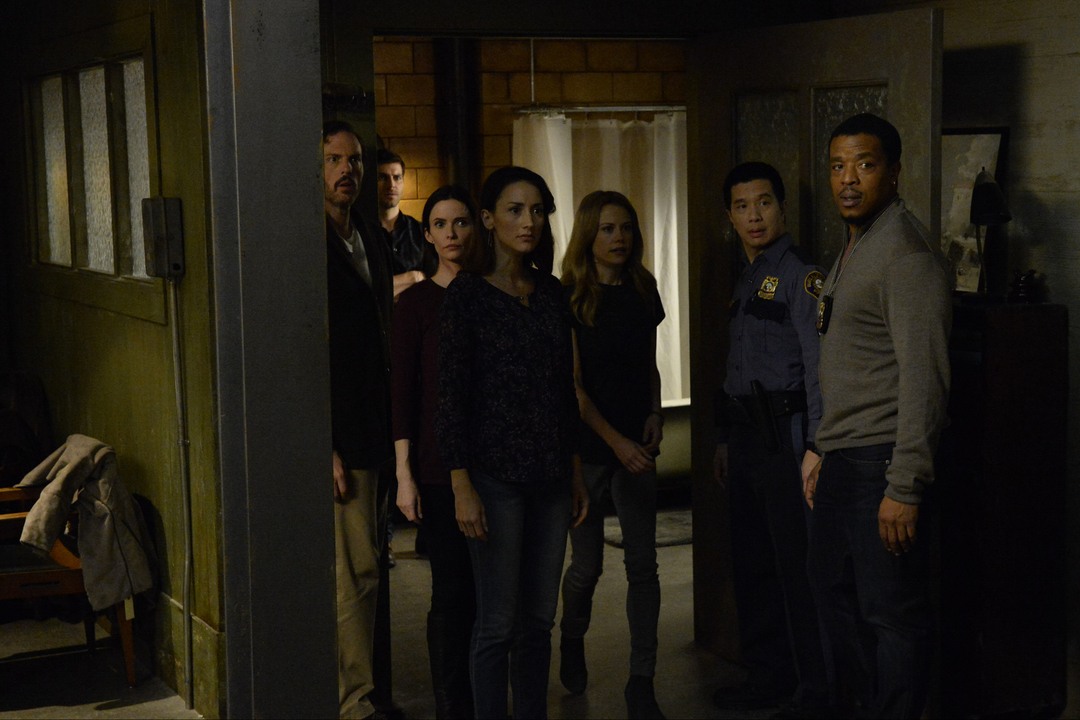 Adalind posits that the thing from the mirror might be attached to Eve since he’s the one who has seen it twice. But… Nick saw it too. Which brings us to the what has become a regular feature of the group hanging out together: an awkward acknowledgment of the somewhat messy Nick-Eve(-and Adalind) connection. Hellspawn Diana hears them talking and injects like “y’all think you know but you have no idea.” She basically tells them that Skeletor lives in “the other place” and they they are ill-equipped to take care of it. She tells them that some thing is going to happen through the hole in the mirror. (Sidenote: where’s Kelly? Don’t he have any powers? At all?) So they’re appropriately freaked out and now Eve is going to stay at Rosalee and Monroe’s place.

Meanwhile in the forests surrounding Portland, two dudes decide to poach deer in the dead of night while also drinking beer. So, y’know, solid decision-making all around. Drunken Dude 1 shoots at the deer from the front seat of the truck. He jumps out the car and does a drunked jig when he sees blood; he definitely shot the deer.

He’s kneeling over the deer’s body when vines wind themselves around his ankles and pull him away. Meanwhile Drunken Dude 2, having retrieved more beer from the truck, wanders up just in time to see his friend being… attacked? Engulfed by a tree that appears to be walking. He does what anyone, drunk or sober, would do: he freaks out. He shoots at the tree-monster (and manages to shoot his already dead friend in the forehead) then he speeds away. But remember how he’s drunk? Yeah… so he drives directly into a tree. 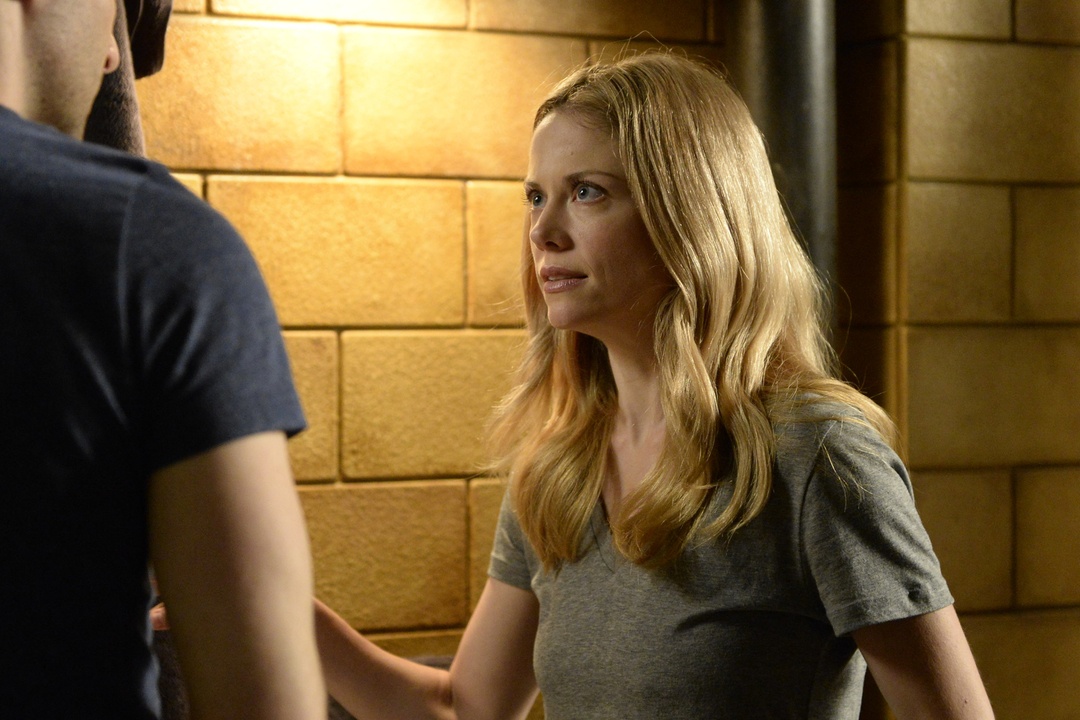 At the loft, Nick and Adalind, have instituted a buddy system whenever one of them needs to look in the mirror. They are shook. Just as Nick decides against shaving Wu calls. Seems they have a case: a DUI is talking about treemonsters killing his friend. Obviously a case for a Grimm.

When Hank, Wu, and Nick arrive at the scene, Drunken Dude 2 is still there and resisting medical treatment. He tells his side of the story, rapidly and at a high volume. He leaves out the poaching part but includes the monster killed my friend part. They find the deer and Drunken Dude 1’s gun. But no Drunken Dude 1.

At the Spice Shop, Eve wants to see the mirror. Monroe and Rosalee reluctantly show her. Eve is holding it, examining it when the dried blood starts dripping. So of course, Monroe is like “Welp, it’s definitely eff this shit o’clock” and puts the mirror away. Eve, though, has the brilliant idea that maybe the only way to find out what’s happening in the other place Diana talked about is to go there. Wha–?

At the station, Nick researches the dead man’s family while Hank reviews the crime scene evidence. As usual, though, it’s Wu who brings the relevant information: several people had gone missing in that stretch of woods over the last few years. While most people who go missing in the woods are tree-hugging hippies, most of the missing people in this area had some sort of crime against nature (poaching, illegal dumping, etc.) in their background. Hmmm. They decide to re-interview Drunken Dude 2. He’s sticking to his story. Wu interrupts the interrogation with a chemical report: high concentration of chlorophyll. Time to consult the books.

Meanwhile, Renard is getting them secret Skype calls from Siberia. His friend asks about Diana’s abilities and where exactly the tunnel Renard mentioned previously are located because how can this kid know these ancient symbols? She tells him to find out. So she’s officially on Team Shook. 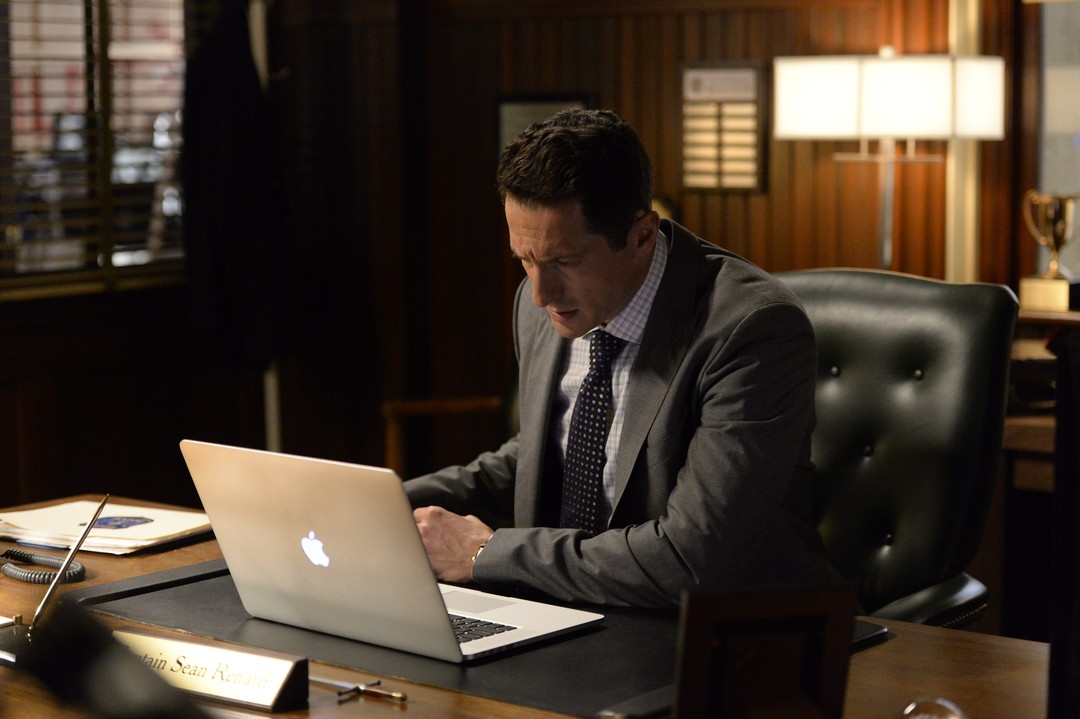 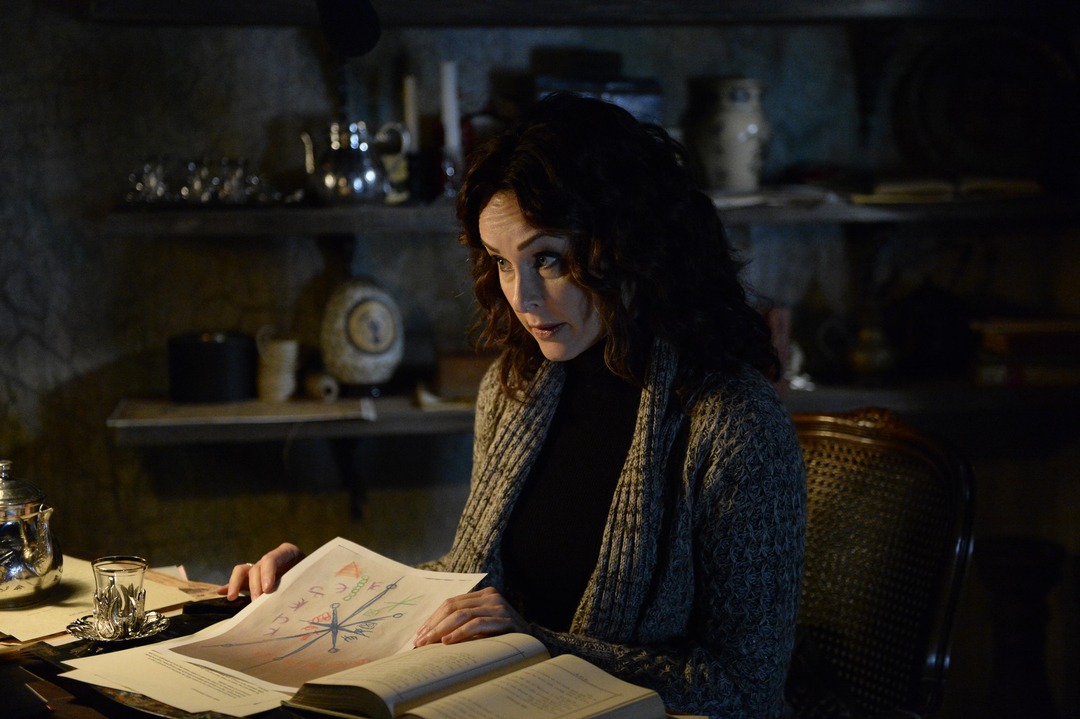 Nick, Hank, Monroe, and Rosalee are in the basement of the Spice Shop looking through books trying to figure out what Drunken Dudes saw in those woods. Hank finds an entry about a Kinoshimobe, a solitary woodland protector. It meets the description given by Drunken Guy 2, but they’re not sure. Wu interrupts the conversation by calling them back t the precinct.

Wu realized that within the last 20 years, a lot—way too many—of people have gone missing in that area who had criminal records for crimes against mother nature. They decide to go back out into the in the woods in the morning.

About the same time, a woman rolls up into ye olde forest and decides to dump some toxic sludge. Welp. I think you know where this is going. So fast forward a few hours and she’s dead. This time, we see the Kinoshimobenot not only kill her but drag her body away. But where? 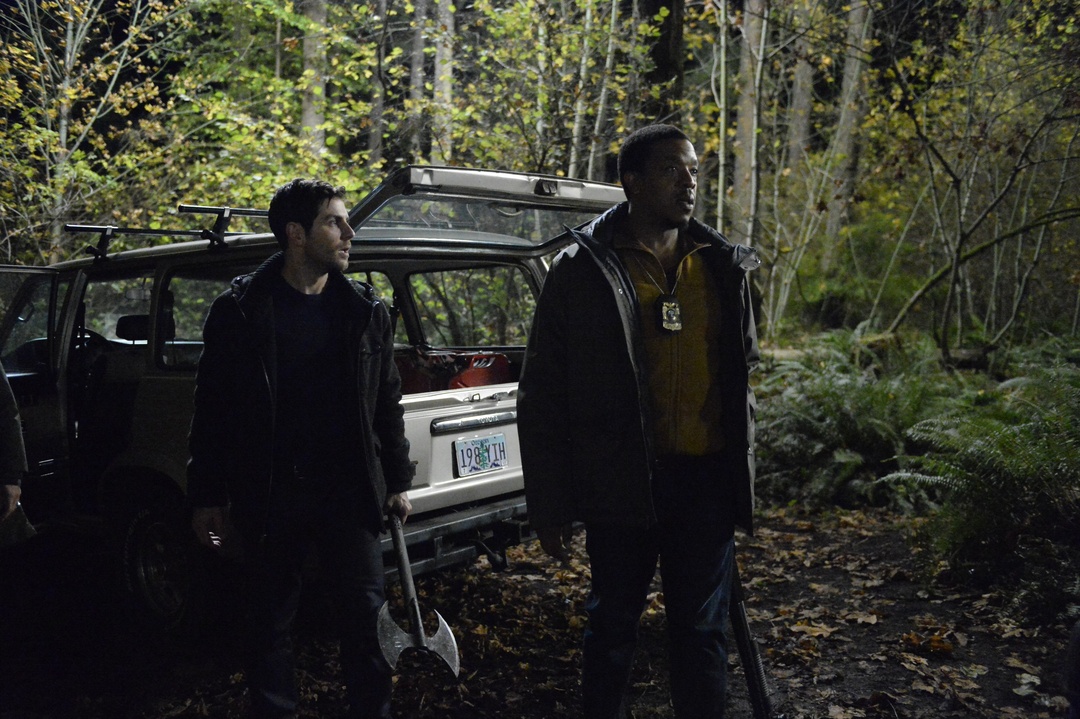 The next morning, Nick, Hank, and Wu are in the woods. They find the dead woman’s truck and essentially a puddle of her blood. Back at the precinct, they find out that she’s got a record for illegal dumping. They pinpoint on a map where people have gone missing over the last few years and establish a tree-monster-gonna-get-dat-ass zone.

Against all self-preservation instincts, they go directly into the middle of that zone and find what might be the creepiest tress that ever lived. They can see the faces of (dead) people in its bark.

They show Rosalee pictures of the tree back at the Spice Shop and she’s all “of course! It’s this blood eating tree. But it’s not a monster or a Wesen.” What? Do you hear the words that are coming out of your mouth? Nick, Hank, and Wu lined up pictures of the missing (dead) people and the faces in the tree match exactly. But if this is just a tree, rooted to the ground, like any other tree, how did the faces get there? Nick suggests that maybe the Kinoshimobe and the tree are… life partners. 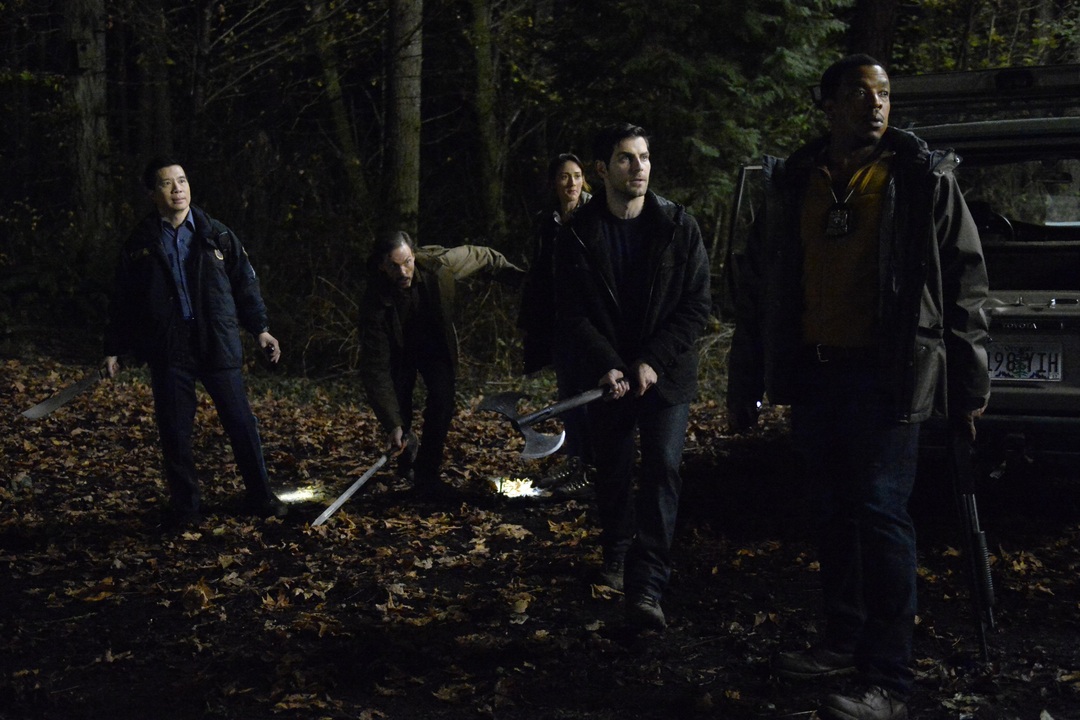 They decide to tempt the Kinoshimobe by pretending to dump waste in the forest. Rosalee whips up some reptile ointment. But because Kinoshimobearen’t dumb, it doesn’t work. So they call Rosalee to bring some slightly more toxic sludge. She tries to, but she has car trouble and it starts leaking oil. Cue the Kinoshimobe. So it attacks her/them and the dudes descend on it with the wrath of at least four axes. In the process, they “kill” it.

The tree it’s booed up with… opens up and wills it inside of itself and then the Kinoshimobe’s face appears in its bark like the dead people. Nick and the gang leave because are they supposed to arrest the tree?

But when they do, the Kinoshimobe, still in the bark, opens its eyes. Welp.

At the Spice Shop, Nick records, for future Grimms, in the books what they learned. But we know that what he writes isn’t entirely accurate. Which leads to the question of what else has he read in those books that was a fraction of a story?