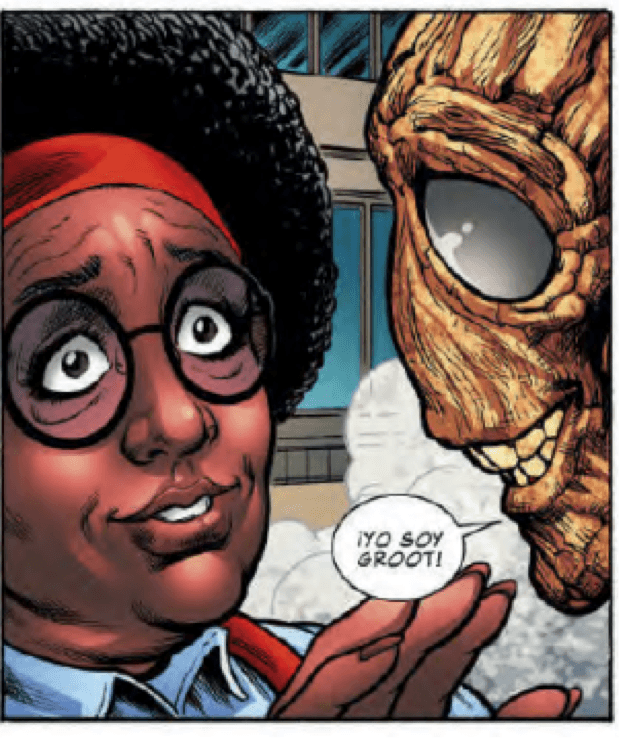 February was Black History Month, and if we celebrating Blackness in its entirety then we can’t forget our AfroLatinx peoples. So what we talkin’ ’bout? We talkin’ ’bout all of Black history courtesy of the South Bronx writer and artist Edgardo Miranda-Rodríguez.

Miranda-Rodríguez knows how to hold it down for his people. My man gets his first chance to write a comic book for Marvel and he stunts full Boricua (the indigenous name for Puerto Ricans) on errybody, like riding through New York City during the Puerto Rican Day Parade blasting salsa, straight stuntin’. The ancestors put the call in and this man delivered graciously with Guardians of Infinity #3, but who are we kidding, he’s done it before.

For this comic we see power team ups taken to a whole ‘nother level under the pen of both Miranda-Rodríguez and Darryl “D.M.C.” McDaniels, the one and only hip-hop legend and founder of the independent comics publisher Darryl Makes Comics where Miranda-Rodríguez is the Editor-in-Chief. Together, they use The Thing and Groot to tell a story jam packed with shout-outs to their respective heritages, all under the scaffolding of a New York landscape seldom seen in mainstream comics.

The story wastes no time in reppin’ the East Coast as the duo end up crash landing right under the Williamsburg Bridge in Manhattan. And if that wasn’t enough, the second page has The Thing making a wardrobe change faster than you can say “It’s Tricky,” rocking the black jacket, fedora, and the classic Adidas sneakers of D.M.C. himself. 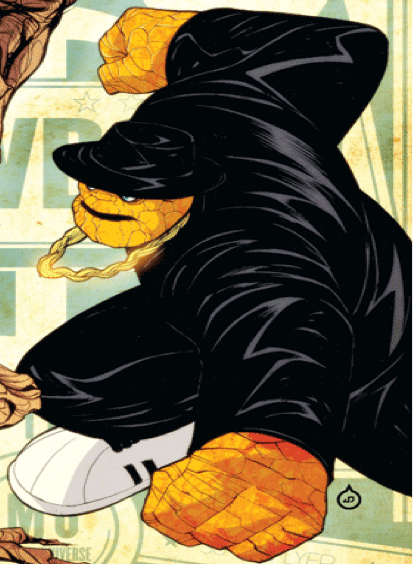 As they traverse the Lower East Side, or Loisaida as we Puerto Ricans like to call it, The Thing schools Groot on urban living. The Thing drops lines like, “Ya gotta rep for these streets from yer head to yer feet!” as local kids climb Groot outside of the Jacob Riis Housing Projects. The Thing even poses in a B-Boy stance with residents as Groot hands a little girl a flower. The scenery has a 1980s feel to it, having both characters interacting directly with the marginalized neighborhoods both writers grew up in.

Yet the real action starts as they both hop an MTA bus, and their tour is cut short by some Little Shop of Horrors ish.

What’s special about this comic is that even the villain, Plantman, a.k.a. a dude who controls plants and turns them evil, is an homage to the eco-activists Miranda-Rodríuez remembers seeing in Loisaida. As a kid, he was surrounded by many strong Latinas in the neighborhood who took up creating community gardens out of vacant parking lots while decrying mass development. But Plantman takes the cake as most annoying activist ever.

As Plantman yells about the “magnificent forces of nature,” The Thing rips one of his evil plants apart and starts right on gloating about it to the news reporters on site, leaving Groot out there with Plantman. Number one rule: never leave a homie out there alone, especially if their plant genealogy lends itself to being controlled by the villain, duh. With a raging, brainwashed Groot beating the crap out of The Thing, enter in the real hero of the comic: Abuela Eterna. 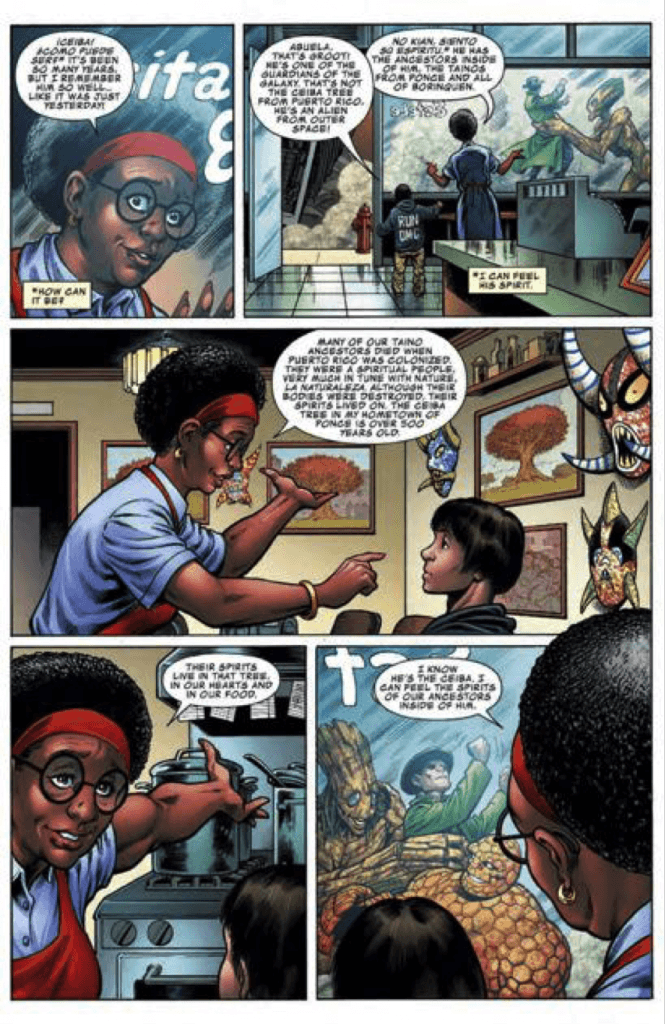 Abuela Eterna comes straight into the frame, no intro, no theme song, no long walk down the WWE welcome ramp, just pure Puerto Rican truth goddessness. In the whole comic she is only ever referenced as Abuela, giving her an air of mystical otherworldliness that every Latino kid been known since birth. Abuelas have had superpowers since the dawn of time, just ask Junot Diaz. He knows.

Not only is she rocking the natural fro, surrounded by Puerto Rican cultural artifacts, and standing in her own self-run business, but she is actually at the forefront! Why is that so important?

Because anti-Blackness been running rampant in these Boricua streets for too long, y’all.

Puerto Ricans been hiding their Blackness for generations, so much so we got a phrase for it, “¿Y tu Abuela donde ta?” This translates to “And your grandmother, where is she?” People would ask this when entering a Puerto Rican home because Puerto Ricans would hide their dark skinned grandmothers in the back of the house so no one would see they had African ancestry.

And if you ain’t hip to the knowledge, Puerto Ricans can trace their roots to Spain, Africa, and the indigenous people of the island, the Tainos. Yet every mamacita and papichulo wanna talk about their royal blood from Spain and stay silent on the rest. But Miranda-Rodríguez ain’t playing these games; he manages to not only create a world where both Latinidad and Blackness are intertwined, but he uses this indigenous Black Abuela as the focal point! You hear that? That’s the sound of elderly Latinas fainting in the pews because we just held church, y’all.

Abuela Eterna immediately identifies Groot as connected to the Ceiba tree, turning to her grandson and saying “Siento sú epsíritu (I can feel his spirit). He has the ancestors inside of him, the Tainos from Ponce and all of Borinquen.” She is referring to the 500-year-old Ceiba tree in her hometown of Ponce; there, the tree is believed to contain the spirits of all the Taino ancestors who were killed when Puerto Rico was colonized.

Hold up. Did this man just connect decades of Marvel comic book history to the colonization and mass murder of the Puerto Rican people? Yes, yes he did. 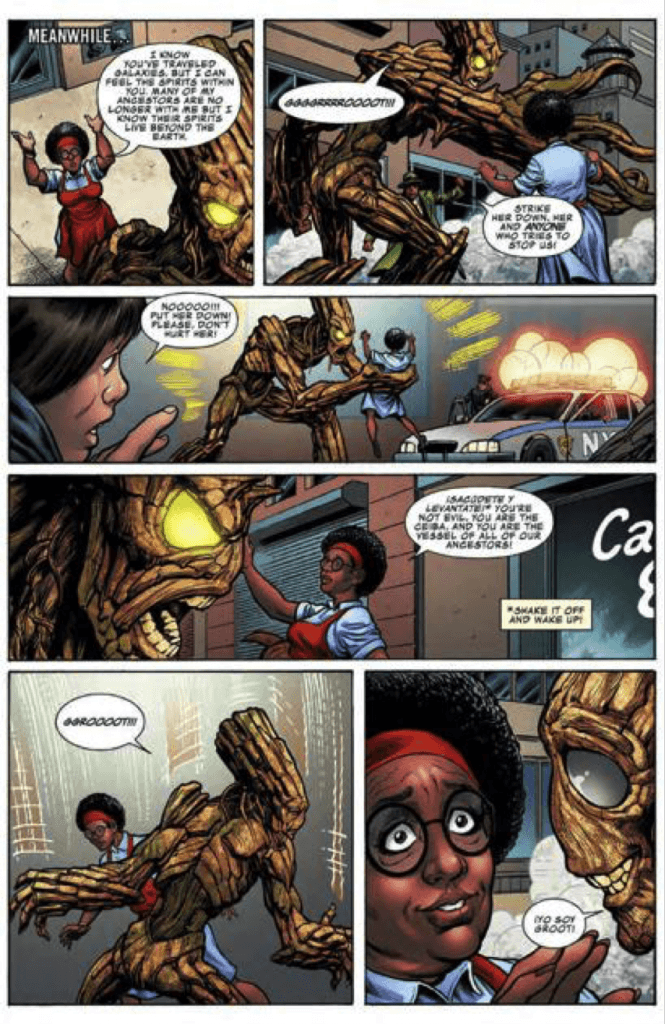 CUE THE BOSSEST MOMENT OF THIS COMIC: Abuela Eterna, with no superpowers, no weapons, and no preparation goes out in front of Groot and learns him real quick on his ancestry. Groot gets control of himself, and in a moment that will make you grab ya closest primo and scream WEPA, says “Yo Soy Groot!”

Miranda-Rodríguez wrote “Yo Soy Groot” in this comic and the hype still ain’t die. Dozens of Latinx magazines have asked him for an interview and the comic is becoming a staple for how to integrate AfroLatinx culture into the mainstream.

In other words, every Puerto Rican grandma on the block from the Bronx to San Juan is yelling out the fire-escape window talking about “Nene, don’t forget to buy the carnation milk, a case of Malta, and a copy of Guardians of Infinity #3 for me!” A.K.A. whenever you see this GIF, know that Groot is dancing salsa like the good and all-knowing Tainos intended:

Miranda-Rodríguez shows in 15 pages just how far reaching our heritage can go, connecting the struggles of the Puerto Rican people to the never ending growth of the galaxy. His ability to tell a story that stays true to his love for comics, his cultural heritage, and New York City proves that the mainstream can and should continue to invest in the narratives of marginalized peoples.

Whether or not Marvel gives him the opportunity to write another comic, this one is 10 out of 10 WEPAS.