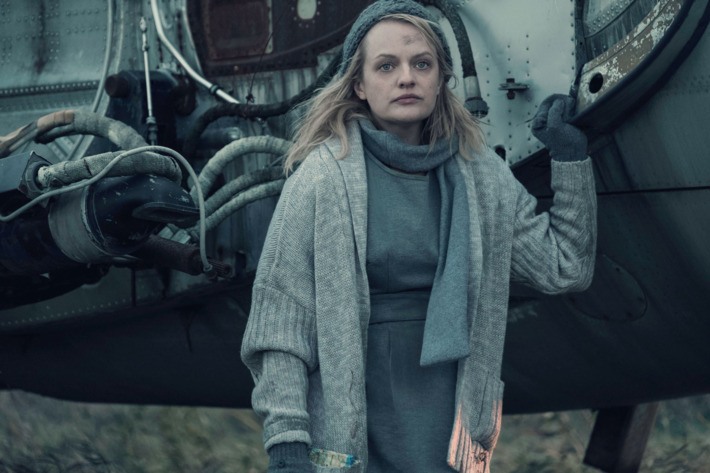 **If you haven’t tuned in walk away… ain’t nothing but spoilers here. Blessed be the fruit.**

We wrapped up the second episode of The Handmaid’s Tale learning about many of the rituals in Gilead. We saw flashbacks of Emily (Alexis Bledel) as a professor during crimes committed against LGBGQIA+ folks. Then switched to present-day Emily in a wasteland of unwomen decomposing by the second and ruthlessly merking an ex-Martha. Hulu gave us June (Elizabeth Moss) being shipped from place to place until she inevitably landed at the abandoned Boston Globe. Nick, an Eye/secret officer of Gilead and the man forced to impregnate her, is the reason for June’s escape. He gives her no sign of a plan, no end to the beginning of this journey.

Episode 3 opens with June putting in that work around the Globe. The first two minutes in look like a Gilead Refugee Crossfit ad or a Nike Women’s ad. She’s been there for two months, stamina building and constructing an altar to those who fell victim to slaughter for informing the world of Gilead’s coming.

June has also been rifling through the newspapers, taking notes, and building a wall of evidence. She is listening to audio accounts of the former reporters. As she tapes articles to a wall with sticky note headings, we hear her say “You were there all the time, but no one noticed you.” The coming of a new age is never over night, and June seems to finally be realizing this. She’s so consumed in her research that she is rather reluctant to leave when Nick reveals that there is finally more to the plan, and June will be leaving soon.

While June seemed somewhat clueless to the takeover in most flashbacks, her recollections in this episode show her with her social activist mother (cue Cherry Jones of 24 and Transparent). Instead of feeding ducks, June was brought up to feed the fire and fight the patriarchy.

The Blended Family of Canada

Three episodes in and we finally get to see Moira (Samira Wiley) living with June’s husband Luke and the woman with (seemingly) selective mutism who escaped alongside Luke in season 1. Moira has taken on the role of den mother, handing out coffee and eggs before she goes to work at the refugee center. There she meets a newcomer whose traumatic remembrance of slaughter visibly triggers Moira. He tells her of how he witnessed fellow army members die for being “gender traitors.” Moira ushers him on, pointing him in the direction of trauma counselors while trembling. 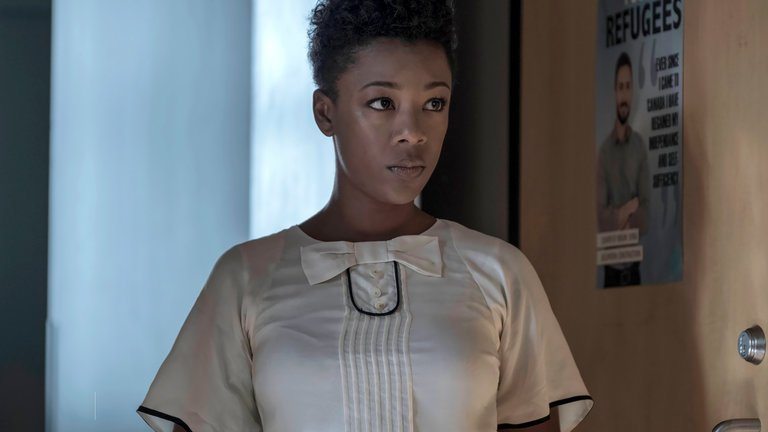 The older fella that dropped June off at the Boston Globe is back to pick her up for the journey forward. She still has no idea where she’s headed, but she jumps in the back of the truck while the violins play and starts having flashbacks to times with her mother. June is dropped off at an old shack full of road signs. Not just any road signs, but damn near all of them. The exit sign for the Boston Airport leans against the back wall and is god-sized with June standing in front of it.

She’s leaning in front of the “Entering Salem” sign when a brother (Omar) walks in and asks her if she’s a good witch or a bad witch. After a rigorous game of “Who’s Who,” June checks out and Omar lets her know that he’s the transport to her safe place. From there she’s on a plane to Canada. No names. No more details. Before they can load her into the bakery van, he gets a message on his burner that the safe house ain’t safe. Now, Omar is already a Black man hauling a white woman in the middle of Pence’s apocalypse… I ain’t mad when he tries his best to put her back in the shed and drive off.  He’d already said that the folks helping at the safe house were either brave or stupid, so now he has to choose. Brave or stupid? Maybe both, because he ends up taking her to his home. 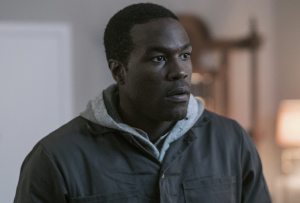 Once they arrive at Omar’s apartment, we get a glimpse into the lives of the laborers, Guardians and those who drive the economy. Everything is grey. Grey walls, grey sofa, grey clothes, grey demeanor. You guessed it, Omar’s wife Heather ain’t having it. The walls of their tiny place talk and if they’re caught harboring a handmaid, that’s their ass. This is an entire family (mother, son and father) at risk. Heather is throwing judgement like rice at a wedding telling June that she’d die before letting anyone take her child.

Heather is not only upset that June is in their home, she’s repulsed at the idea of a handmaid. June lets her know that she used to think the same way. This is how the narrative works, right? Pit the women against one another and they’re less likely to bond together and resist, right? I see you Gilead.

When the family leaves for church, they caution June to be quiet and that they’ll return in two hours. The thing is, they don’t… and she’s less than quiet. June got on my last damn nerve walking around and playing with marbles, looking out the window. When someone knocks on the door and calls for Heather and Omar, June ducks under the bed to hide. While there, she finds a Quran and a prayer rug wrapped up and tucked under the bed. She’d been worried about Heather and Omar’s buy-in with the new religious order, so this actually made her feel more at ease. I just wish she had left their stuff alone.

June is reliving an evening with her mother, Holly, remembering how much her mother didn’t agree with her life choices. At the time, June was working for an editor, she was engaged to be married to a man. June never fought for anything and didn’t seem to take much heed to the societal changes around her. Holly, being the feminist and social activist that she is and whom I’m sure she believed she raise June to be, didn’t hold her tongue.

The scene changes and June remembers a session during her “handmaid training” where the handmaids are being shown what happens to those who betray The Eye. Moira grabs her leg and June sees Holly clad in labor clothes hurling sacks onto a wagon with Guardians surrounding her. June shares with Moira later that her mother warned her of this and that Holly’s resistance is not only what landed her in the fields, but what will sustain her there.

Determined not to be left behind or wait for a man to save her, June decides to don Heather’s clothes as an Econowife and walk out into the bleak sun. She looked the part and walked the walk… following the Econowomen, site unknown. June stares a bit too hard at the subway maps and is seen by another woman with a map in her pocket. Nevertheless, she persists. While having flashbacks of when her daughter was taken from her during her family’s escape, June runs into the woods. She’s stunned by her thoughts of leaving Hannah behind, but somehow finds it in her to run all the way to the airport that she was to be escorted to by the safe house family. 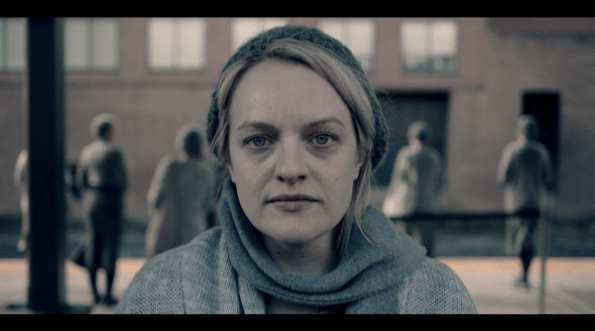 Folks are just tryna cope. Moira tries to unwind in a nightclub. She catches the eye of someone across the bar and soon the two are in the bathroom releasing some tension. Caitlin tries to return the favor to Moira, but she can barely look Caitlin in the eye let alone allow her to touch her. When names are exchanged, Moira gives her former Gilead Jezebel name Ruby. When she gets home, it’s all eyes on her from one of her roommates. In a sweet sense of comradery, the roommate who has been selectively mute since we met her, passes a box of cereal toward Moira and says “Blessed by the Fruit Loops.” The comedic relief was well needed and heartfelt.

June makes it to the airstrip alright, but no safe house family in tow. The pilot pulls a gun out and the “Who’s Who” begins again. After that’s settled and they head toward the cargo plane, a runaway Eye walks up and almost gets merked. Another game of “Who You Wit?” and they’re loaded into the bottom of the plane…heading down the runway… ready for takeoff…. 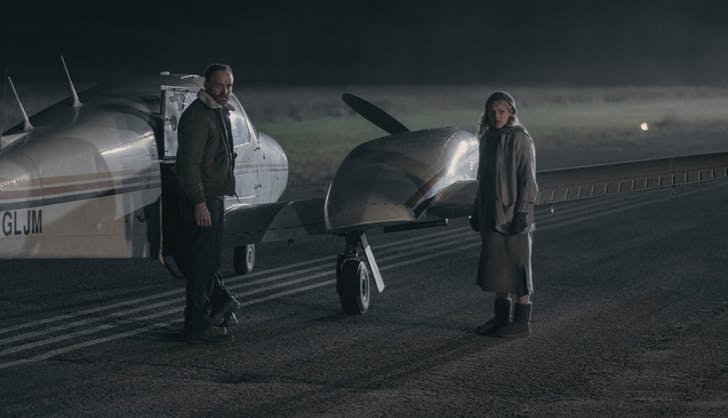 Shots fired. Pilot caught one in the shoulder. Ex-Eye catches one, two, in the back. Engine shot up. Guardians start pulling folks out of the plane. They kill the pilot. Drag the Eye and then, of course, drag June out kicking and screaming. It was all too good to be true.