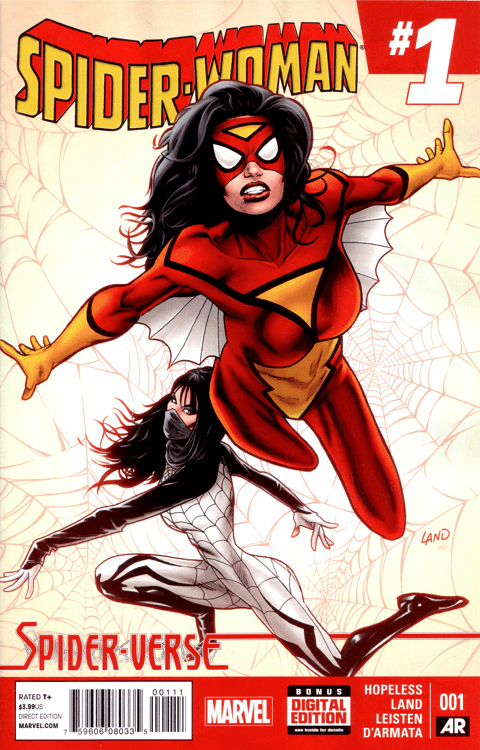 The Inheritors are a family of villains stalking Spiders across dimensions, and now they are hunting one in particular – a newbie web-slinger by the name of Silk. Apparently the Inheritors feed off the life energy of our universe-friendly Spider-people, and Silk attracts them like moths to fire. I say “apparently” because nothing is clear enough to say with certainty in this issue. Who are the Inheritors? Why do they feed on Spiders? How does Silk attract them? Despite “#1” being in the title, readers are not given much insight into the characters or story plot to know anything that’s going on; a pretty significant downside of beginning Spider-Woman’s title in the middle of a crossover story-arc. Find yourself unclear on why Spider-Woman is protecting Silk, and riding around on lizard-donkeys with an Equalist from season 1 of Korra? Welp, you better trust it’ll be explained soon. 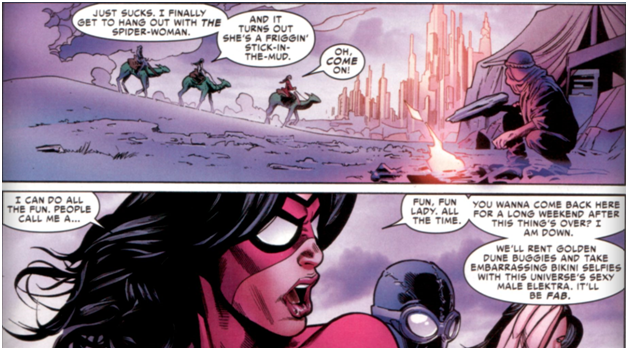 Only it isn’t. Instead you are probably left with more questions than answers, and not the type of compelling questions that make for an intriguing read, like Gotham Academy for example, but the kind that are frustrating because they are not part of any intended mystery. How are these people just walking across dimensions through portals? You’d probably be interested to know, except you were expected to have read the rest of the Spider-Verse before joining the party. The result is newcomers feeling like they are listening to a series of inside jokes, with each punch line floating above their heads.

What you can glimpse is the personality of Jessica Drew, our Spider-Woman, fairly easily. A staunch leader, she is practical, mission-oriented, and generally frustrated or angry by default. In this isolated issue it comes across as off-putting and not very likeable, but I expect her curmudgeon-hero persona will evolve into endearment as her adventure continues. Throw in a saxophone and make her the Ron Swanson of the Spider-Verse. 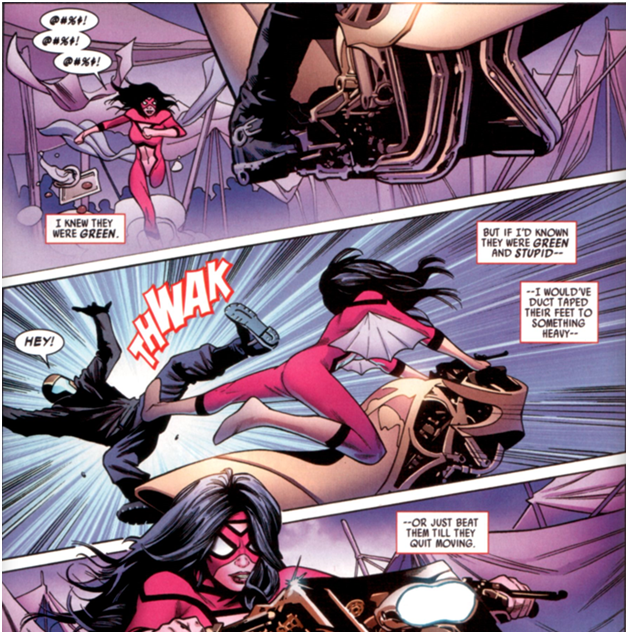 When the Inheritors attack Spider-Woman, Spider-Man Noir, and Silk, the three flee to another dimension where they are found by our universe’s Spidey. “We’re pulling you out,” Spider-Man tells Spider-Woman. He even brought a couple young web-slinging bodyguards to take over Silk’s protection detail. Furious and frustrated, Spider-Woman agrees to leave when she is told they are “losing the war” and that she “might just turn the tide,” but not before dropping a few more expletives his way.

After a variant cover that was distasteful to say the least, Spider-Woman’s solo debut began at a deficit, and issue #1 did itself very few favors. Overall, it feels like Spider-Woman is more a ploy to introduce audiences to Silk, and less a primary character in her own comic. She doesn’t lead the issue at all, but is only reactionary to the events happening to her, and that can’t continue of this is to become a better series. Hopefully future issues give Spider-Woman the attention her solo title deserves instead of being used as a supplement to the larger Spider-Verse. Until then, this may not be fun reading.