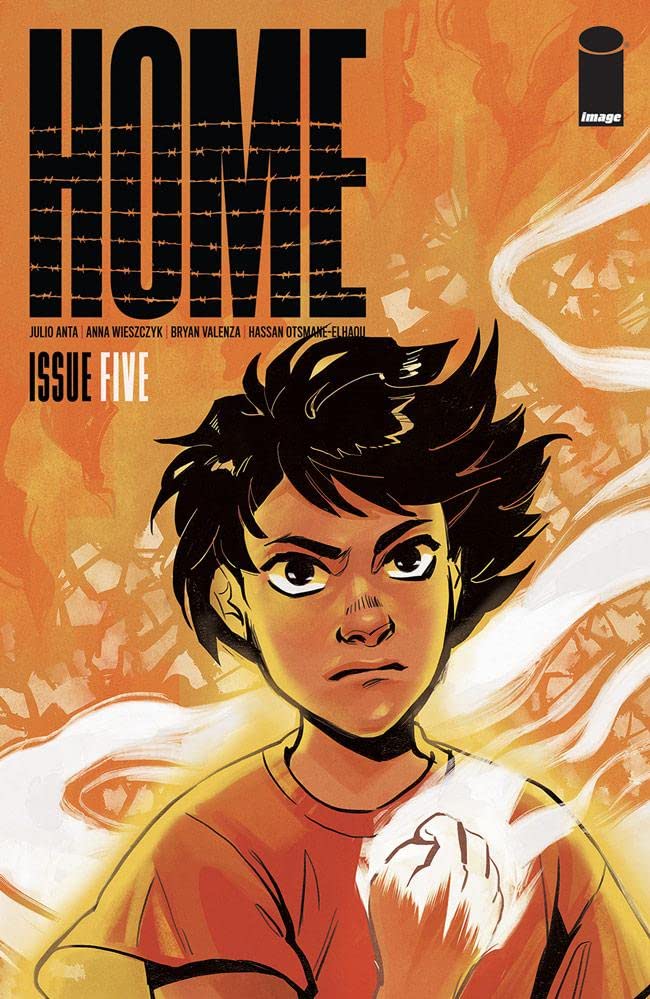 Mini-series face a difficult proposition of being a self-contained narrative. Within the confines of five issues, a creative team at the least has to conclude the story that they set out. But just because there is a “conclusion” does not necessarily mean that the story is over, and Home #5 very much provides equal opportunities for closure and speculation.

After the events in Home #4, we find Juan fleeing from the comfort of his aunt’s house as ICE agents approach. Wieszczyk’s artwork evokes a lot of strong physicality and emotions. Seeing Juan command his powers with confidence is such an empowering way to start off the issue. The moment Anta lets the terse dialog of the impersonal ICE punctuate the flowing action that culminates in Juan making a singular declaration is one of several emotional peaks that happen during the issue.

Anta shows how Juan’s family rallies to his aid and the triumphant image of an immigrant family fending off bullets to protect a child is heartwarming in the best way possible. The first half of Home #5 is the series at its best: a visually stunning display of resilience that imagines a world where people like Juan have the means to defend themselves against a needless onslaught. Where their superpowers are used only as a last resort, a means to equalize an uneven conflict. The action-packed climax is cathartic in the best way and then manages to ease into the more meditative conclusion.

Home has never shied away from criticizing the inhuman anti-immigration policy, even though at times in an attempt to be all encompassing, it errs on the side of the verbose. The backhalf of Home #5 is very text heavy, but Anta is attempting to reconcile real world politics and the reality that Juan and his superpowered kin live in, and to his credit: the ending feels correct. Not hopeful, not overly cynical, but accurate and true to life. Home started with a chilling depiction of a mother and son attempted to cross the border, and it ends with an acknowledgement that change can be evoked…but that it might not happen overnight.

All in all, the finale to Home is a fitting end to the series and made me hopeful that Anta and Wieszczyk get a chance to tell another chapter of Juan’s story, but even if they don’t, they left us with a very excellent comic here.