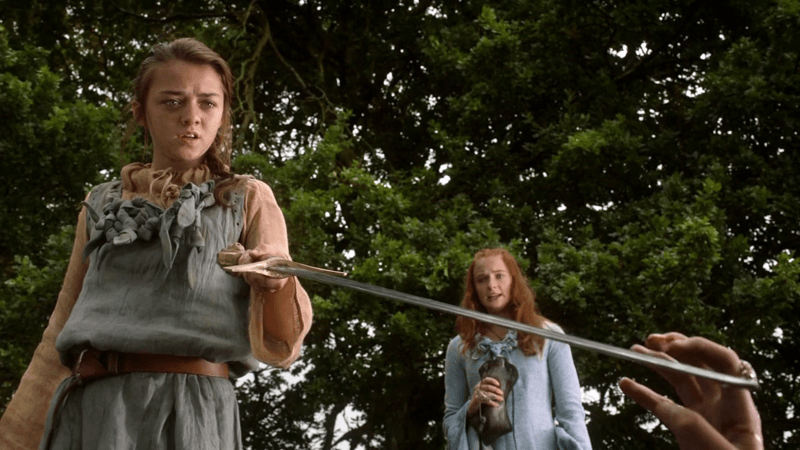 When the movie Hanna starring Saoirse Ronan debuted in theaters back in 2011, my wife and I took in the flick on its opening weekend. Only a few weeks earlier, we had learned that our first child was going to be a girl. Only 10 minutes into the movie after seeing the impressive Ronan display tracking skills, hunting pedigree and adaptive hand-to-hand combat, I had declared, with some conviction, that I would be emulating Eric Bana’s character and taking our yet to be named daughter out to woods for superior survival training. Never mind that I had none of those skills myself to teach. The movie is built like a fairy-tale, an hyperbolic story of the specimen who would be a girl, but at the heart of it was the undeniable fact that Hanna was a badass. And how could you not root for the sixteen year old girl who can put grown men on their back? While the structure of the young girl that can display a physical prowess is a Hollywood trope like any other, for me, it’s still a welcome one.

There is a problematic consequence of the admiration we have for characters like Hanna. By design, Hanna is a killing machine at the detriment of her possessing a complete emotional spectrum. Her naivety or just out right ignorance to the industrialized world subverts her emotional attachment to most things. In this notion, her being a little girl is more an aesthetic spectacle than it is a function within the story. Her interactions are mostly robotic (though, they become less so through the progression of the story) and it becomes easier to root for her because she is so “mission driven.” So the basic question is, do we enjoy Hanna more because of our love for action or because she has been stripped of many traits that we recognize in a young girl?

I make no apologies for Arya Stark being my favorite character on Game of Thrones. I’m also aware that she has little to no interest in being a princess, fancies a sword over dolls and once posed as a boy for a full season of the show. Everybody gets the “gotdamn” face when Arya looks and acts like a stone cold killer, but nobody ever suggested that the showrunners show more of a connection between her and Gendry during their adventures before, during and after Harrenhal. We react much differently to characters who show the brute physicality or blank stare demeanor of our tried and true (read: male) action heroes. Sansa Stark, who is the exact opposite of Arya, could not be met with more resistance. The “stupid, stupid little girl” from the North seems to be universally slandered at every turn. Sansa’s faults are well documented. She has sacrificed much for herself and others because of the fantasy she wanted to lead. And then she…, well, actually, has Sansa really done anything dumb since the first season? You know, when she was a 14 year old girl who had been thrust into the royal court when she had never even left her very insulated stronghold in the North before that? The following seasons have been her not doing much but TRYING NOT TO DIE (oh yeah, she slapped Robin when he was throwing a tantrum and therefore fulfilled the wish of every person either watching the show or in the fiction itself). The seduction of Cersei (who has manipulated far more seasoned characters than Sansa) has probably been paid for three times over considering how much of a monster Joffrey was.

And yet, halfway through season four, people are wondering how and why Sansa is still alive. What those people might be blinded by is that Sansa’s path is basically her becoming the next Cersei: a life of privilege and opportunity that becomes bastardized, turned on its head, and makes her more cunning and ruthless as an adult. If we can fall for the flawed yet fascinatingly brutal way that Cersei navigates her world as an end result, why do we slander Sansa as the “in-progress” model of that? Rob Stark got screwed, he was betrayed, the fall of prince charming and all of that. Rob also catered his own funeral and showed up early for the wake. He slapped a powerful House in the face on multiple levels and lost the loyalty of some of his banner men basically over an emotional decision. But with the internet, Rob gets the caveat of “being honorable just like his father” or “he did what he did for love.” Not that he handled the situation like an idiot. Funny how that works. When emotions are involved for male characters, its humanizing them. When they are involved for female characters, its an annoyance and a flaw.

Possibly the best example of how we put our female protagonists in a box is the Avatar Korra problem. As Oz so thoroughly said, the internet has a substantial Korra problem. I for one am still baffled by it. Here’s the unfiltered truth about Korra: she’s arrogant, narrow, bullheaded, myopic and a sixteen year old girl who has had almost limitless power since she could walk (earthbend beneath herself…whatever). Now, how are those not the traits for 70% of the young male protagonists we have in fantasy settings? If you happen to be playing a video game with a young male protagonist, that’s almost the ONLY traits your character has. The easy argument to that is of course, how she compares to Aang. Aang was humble, appreciative and unassuming. I hate to break it to my brothers and sisters in geekdom, but Aang was also boring as all hell too. Sorry (not really). What Aang could do? Amazing. But Aang wasn’t winning any Mr. Congeniality contests either. The original series needed an abundance of colorful supporting characters to make up for the bland arrow tatted star. While Aang became a hero, he also showed lengthy moments of indecisiveness, lack of confidence and even cowardice (like the reason the 100 year war began in the first place).

That isn’t to say that I didn’t like Aang, I definitely liked Aang. But it’s necessary to acknowledge these faults to tear down this seemingly unbreakable monolith that was the last Airbender in order to put Korra in a proper light. I love how confident Korra is. As someone raising a daughter, I see there are no limits to what the world will try to do to strip a girl of her confidence. I love that Korra has a more realistic arc of being aware as an all-powerful individual, dealing with her hubris and finding other ways to deal with the situations besides her physical ability compared to the reluctant hero trope that was Aang. People rail against her decision making and emotional outburst. Remember that part about her being a hormonal teenager? Where she is different from Hanna or Arya is that we actually get to experience her navigating in a place where her emotional state as a teenager and as a teenage girl actually matter. We should be excited about that. We should be excited that not every female hero has to have Gina Carano MMA training or Gina Carano blank canvas emotional conveyance.

To be clear, I’m not advocating that the pendulum should swing to all super emotional, relationship obsessed women characters. Lord knows that (particularly men) writers have enough trouble writing realistic female characters as it is. What I’m saying is that we need to be willing to accept more than one type of female protagonists without divulging into the typical critique of how annoying or dumb she is, simply because she still has a beating heart in her chest. Our acceptance of the woman badass can’t be confined to how closely she emulates a non-gendered individual or rather, the most masculine of dispositions. While I think the prospective of a Wonder Woman movie carries more social impact because of the icon that Wonder Woman is, I’m actually more interested in seeing a Black Widow movie as it would certainly force writers to build more nuance centered around a woman who has to solve problems without punching through walls or deflecting bullets and still have a personality. You KNOW the first Wonder Woman appearance we’re getting is the doe eyed Amazon fresh from Themyscira who is fascinated by traffic lights and toaster ovens. Which is to say, I prioritize a Black Widow movie, because damnit, we better get both.