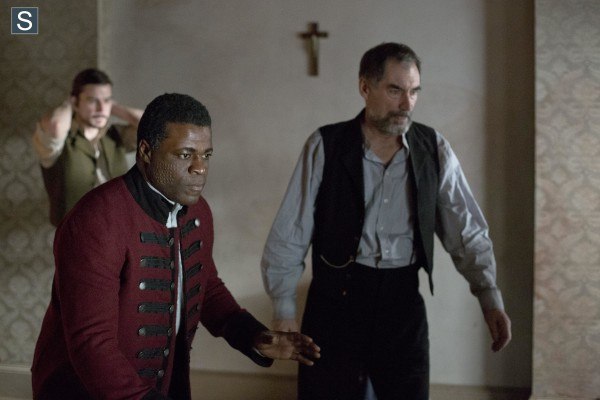 Another episode of Penny Dreadful or as I like to call it, “Fuck This Devil Business, I’m out”. Where we left off, Vanessa Ives was dutty wine’n in the air possessed by the Palpatine forces (dark forces for the non Sith/ Jedis). The episode opens up with Ives laying down on the couch like she in Titanic and Dicaprio bout to paint her picture. She drops a fucking BAR

“To be beautiful is to be almost dead isn’t it? The latitude of the perfect woman“.

Vanessa drives this point on by talking of a trade where men beat off to dead pictures of women. Sir Malcolm ain’t here for all that, he asks Vanessa also if she remembers ascending in the air Ray Lewis style post Superbowl win. He asking the wrong one cause…. that ain’t Vanessa. That’s that dark forces edition Mina talking now and she bout to make a collect call, snitch ALL Malcom’s business, and go off

Mina gave the run down on Malcom’s cheating not just with Vanessa’s Mother, but the women in Africa. Malcolm tried to flex but Mina had something for that

“Oh there it is… The hard face for the N***. Scare them into obeying. The porters and slaves but we were talking about the women. They were as follows…”

Chiiiiiiiiiiiiild, she ran down the list of the tribes Malcolm was going through, and pressuring his son to partake to prove his manhood. Malcolm is in the lead for shit dad of the year. After counting the sins of the father Mina had that Ikea furniture flying around the room. Sembene had to come in and put the Super Smash Bros combo on Vanessa to snap her out of it. Victor Frankenstein comes over to see if there is anything he can do medically. Vanessa goes into the darkness again and tells him bout himself as well. She quotes the Shelly line he said to Dr. Van Helsing last episode right back at him and mentions his own “demon” (Caliban) that he is running from. Victor gets the fuck outta dodge with a “WHO BEEN TALKING?!? look on his face and tells Malcolm it may have been a sexual experience that set this off with Vanessa (due to her past guilt over her affair). Malcolm says she was with Dorian Gray aka Mr. Steal Your Girl soooooo… Victor has the best theory and must be right cause then spiders start appearing from her tarot cards and crawling all on the table. Raid hasn’t been invented yet so they must have had to get mad newspapers to fix that problem.

Malcolm sends for Ethan Chandler to come over. He arrives in a shot that is a straight homage to The Exorcist. Ethan sees Vanessa and she is glad…but he ain’t above getting that work either. She talks about her encounter with Dorian Gray bringing the Rick James out of her and says Ethan knows all about that life. Oooooooooooh, she says all Ethan business with Dorian for ayebody in the room to her. Asking if Dorian had his toes curling, if he told his girl Brona, and threatening to do it herself. Man listen, everybody got that work from Dark Edition Vanessa. They decide to watch her around the clock during her fits since Sir Malcolm doesn’t want to involve a priest (even tho he tells them the devil trying to owe her child support), Vanessa got everyone walking out of their shifts like any rapper that brings Andre 3,000 on their track.

Vanessa in a moment of clairty sees Ethan Chandler which prompts her to confess how sweet he is and how she trusts him to end her if need be. Ethan is compliant till we find out that ain’t Ethan in there… The Devil back in Vanessa’s head again. Vanessa asks what he wants and he gives her the same line Fitz told Olivia Pope in Scandal, “I got you this house in Vermont that you can make jam in Ma. Oh, I kinda want you to have my demon spawn children so we can scorch the Earth and piss God off too” Vanessa tried to fight it but she saw the low mortgage rates on the house he was talking bout and it was a wrap.

We get a moment between Chandler and Sir Malcolm discussing Africa. Ethan is saying, “MY DUDE, we got a situation here and you talking about your frequent flyer miles?” We find out that Malcolm buried his son in Africa. He wants to bring his bones back to the country but Ethan ain’t buying that shit. Ethan told Malcolm like it is, “you not that nice I promise“.

Victor sees Caliban hanging outside the house stalking his ass waiting for him to finish his bride. The scene would have only been better if Caliban was across the street throwing gang signs. Ethan rolls in the room and thinks Malcolm is keeping something from them about Vanessa, that they aren’t getting the whole story. After a speech on comparing Vanessa to the natives back home, Victor agrees with Ethan then says, Aye, show you how me you do that there with gun slanging” which has them in the basement emptying clips acting a fool.

Sembene gets some more history flushed out in a conversation with Ethan. Ethan guesses that maybe Sembene owes Malcolm for saving his life. Sembene flips it on him with a “or maybe I saved his and feel responsible for him now“. Malcolm creeps up in Vanessa’s room and basically says “aye, I know you tired and shit, but since you between the worlds of life and death right now, see if you can give Mina a shout out to see where she is”. Dude, come the fuck on man. He said that shit like he was asking her to pick up some Wendy’s on the way back home. Ethan over hears this then takes Malcolm to the hallway where he and Victor get in that ass on some “Bruh, what the fuck?”

They are getting a priest and ending this shit tonight. Ethan also tells Malcolm that if he orchestrated this shit on purpose, he going to put them paws on him. Malcolm later confess more from the diary of a shit Dad to Victor when he tells him how his son died. Peter asked his father to name a mountain after him, Malcolm said, “fuck a load of that” and named it after himself. The priest comes in but ain’t bout to do an exorcism since he’d need permission from the church which is like going to the DMV evidently. He comes in and tries to help Vanessa, but this situation is above this preacher’s donation grade. Vanessa then bites a piece of the preacher’s face off and starts to wreck house on some She-Hulk shit. Everybody getting thrown into walls until Ethan Chandler pulls the grandfather glock on her. Ethan bout that compassion tho so he holsters his piece, gets Vanessa against the wall hoping she comes to. Vanessa tells him to end it. Ethan is about to oblige but then remembers he has Brona’s Saint Jude pendant and apparently remembered he saw a “15 ways to perform an exorcism” list in a Buzzfeed article once. Ethan Birdman hand rubs his hands together and gives Vanessa that be healed magic.

All is well, Ethan bounces like a G,
and guess who wakes up knowing where Mina is…