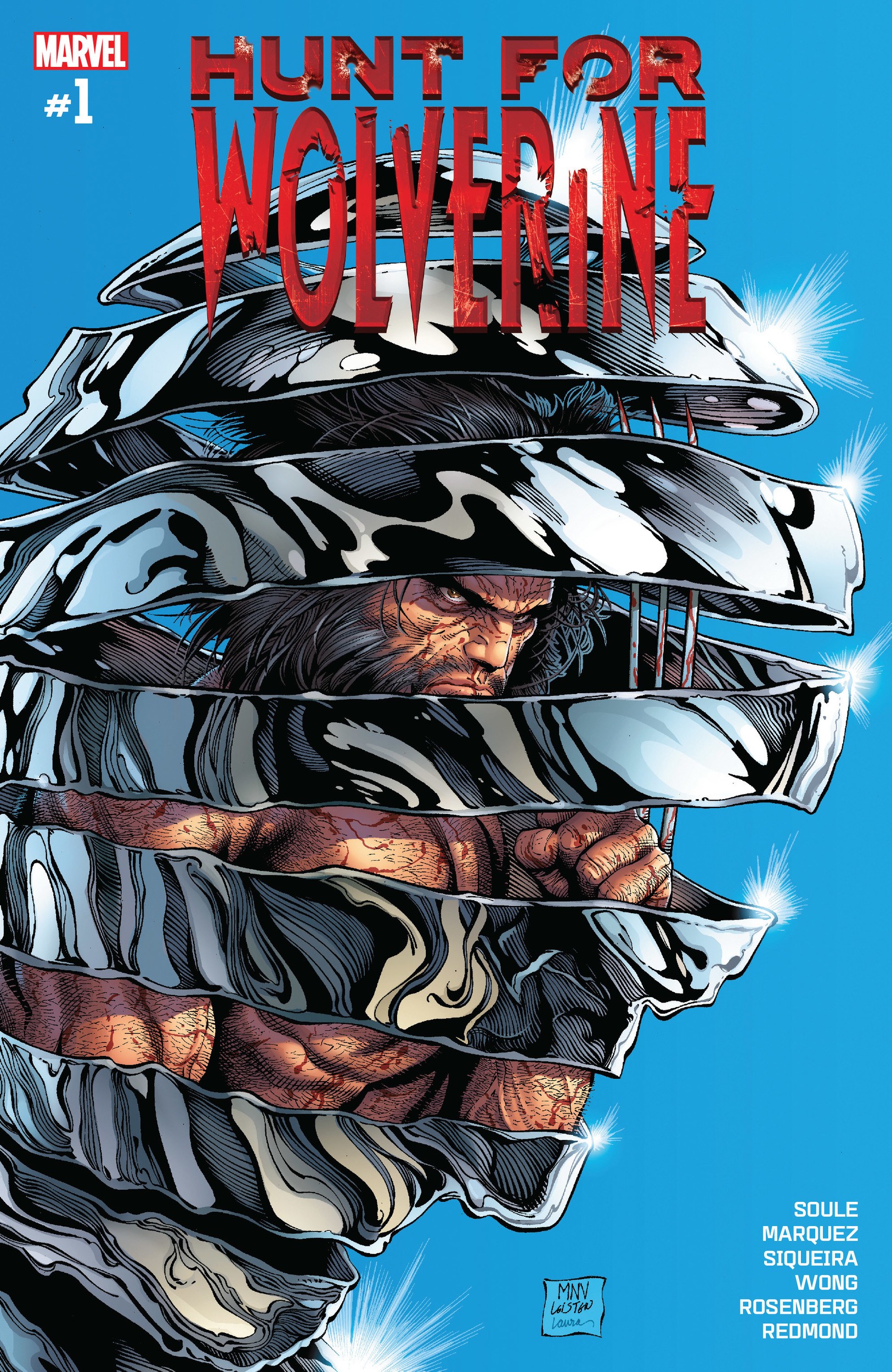 No One Ever Really Dies

In comics, death is a merely a pause and a resurrection is only a reboot away. The X-Men, arguably more than any other comics mythology, die and return more often than any sane person wants to remember. In this decade alone, Professor X, Jean Grey, Nightcrawler Cyclops and Wolverine died and/or were resurrected. The Death of Wolverine in 2014 (also written by Charles Soule) created a bit of an awkward circus in its wake. How many alternate reality, time displaced, future progeny and Wolverine clones can the X-Universe really justify? Currently, Old Man Logan, X-23 (now in the Wolverine mantle, but not for much longer), Daken, Honey Badger, and James (from an alternative universe) are all gracing the pages of Earth 616.

Now that the OG Canuck is back, let us hope for a clearing house of the clawed ones. X-23 and Honey Badger are great characters with potential and mythos; at this point, though, Daken, James and Old Man Logan are frustratingly redundant. Logan’s growth as an individual has always been connected to his mentoring, first of Kitty and later on, Jubillee. Suddenly resurrected and with now two ‘daughters’ instead of one, Logan will have lot of family issues to sort. Then, there is the small issue of the recent resurrection of the love of his life, the woman whom he killed to save the world 14 years ago – Jean Grey. Cyclops is dead, so the Wolverine and Jean relationship will definitely play a role within the next year.

Wolverine, dead or alive, is one of the biggest bounties for in the Marvel Universe. When the Reavers, mutant-hating cyborg bounty haters, get intel on the location of Wolverine’s body, they stage an attempt to steal it to pay for their biotech upgrades. An X-Men unit consisting of Kitty, Storm, Nightcrawler, Colossus and Firestar respond to the tripped alarm at the cabin supposedly containing Wolverine’s body (encased in Adamantium) in Alberta, Canada. The Reavers, the B-listers that they are, take a solid thrashing from a classically uncanny X-team. 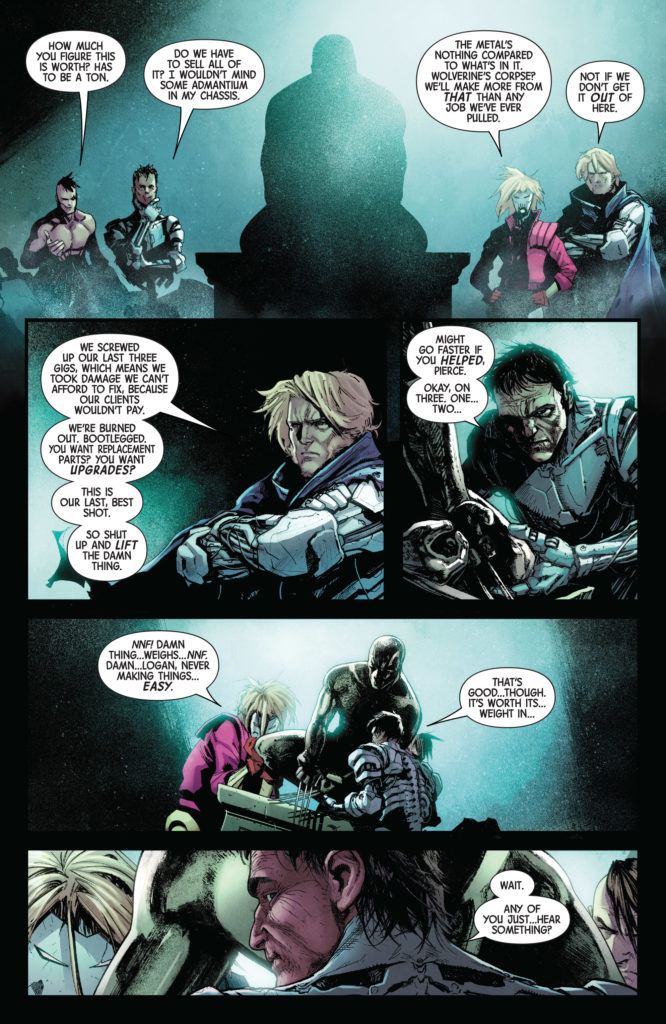 The cyborg bounty hunters are even further stumped when they find that Wolverine’s body lies elsewhere after prying open the Adamantium casing. From there, a series of flashbacks and cross-cutting reveals that the X-Men intentionally hid Wolverine’s real body, knowing he would always be a target. The trouble ensues though when Kitty goes to visit the site of Logan’s actual gravesite.  Discovering that the site is actually empty, she hits the streets of NYC to gather allies in locating Wolverine. 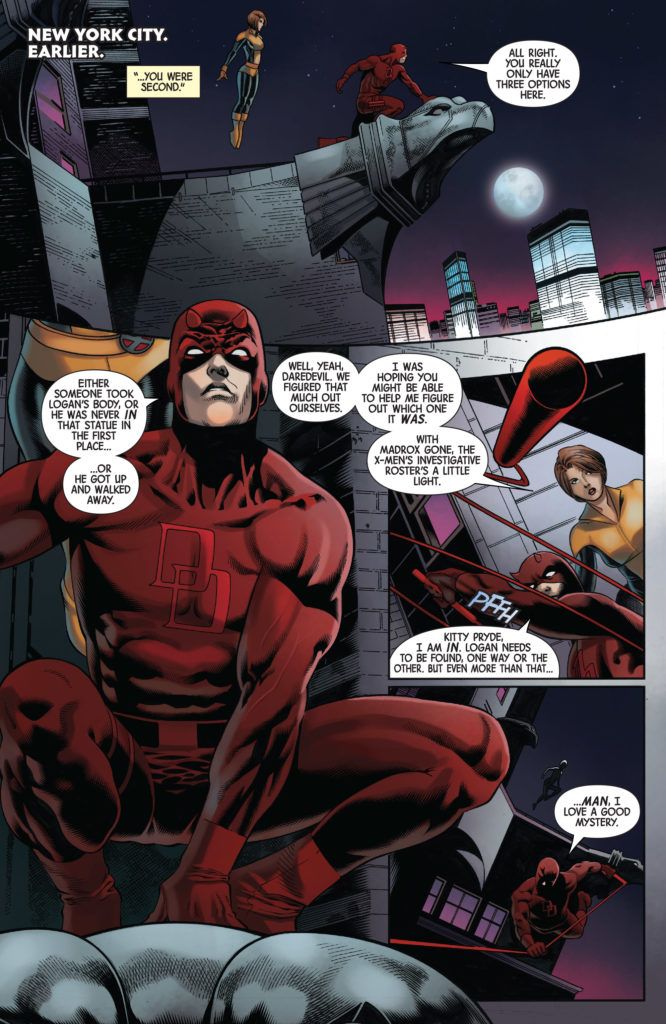 Where Do We Go From Here?

The ensuing mini-series under the “Hunter for Wolverine” title will each consist of four issues, focusing on teams of Logan’s friends and colleagues scattered across the globe of search of Wolverine’s body.  “Weapon Lost,” (Soule and Buffagni) finds Daredevil assembling his own crew of Marvel gumshoes (Misty Knight, Frank McGee and Cypher)  to track down Logan.
“Adamantium Agenda” (Tom Taylor & RB Silva) features Iron Man enlisting the help of Luke Cage, Spider-Man and Jessica Jones. “Mystery in Mardripoor” (Jim Zub & Chris Bachalo) takes Rogue, Storm, Psylocke and Domino to the infamous isle of sin. Finally, in “Claws of a Killer” (Mariko Tamaik & Butch Guice) the slicers come out to trip each other to shreds – Lady Deathstrike, Sabretooth, and Daken.

That equals sixteen comics. Economically, that’s a lot of comics to purchase at $3.99 each in addition to a fan’s normal subscriptions. With that in mind, most fans will probably compromise between their favorite creators and their most beloved characters.

If one is to buy only a issue in the saga of the return of Wolverine, it would be this comic. Overall, it is a standard event primer comic with the purpose of launching into the various mini-series. For that purpose, it is a strong comic. Marquez has a great eye for character expression, movement, and framing. His cinematic work has been missed since Bendis’ “Defenders,” so his work here is a welcome return. Soule’s careful temporal cross cutting between scenes and the narration driven by Kitty Pryde make for a compelling, page turning read.