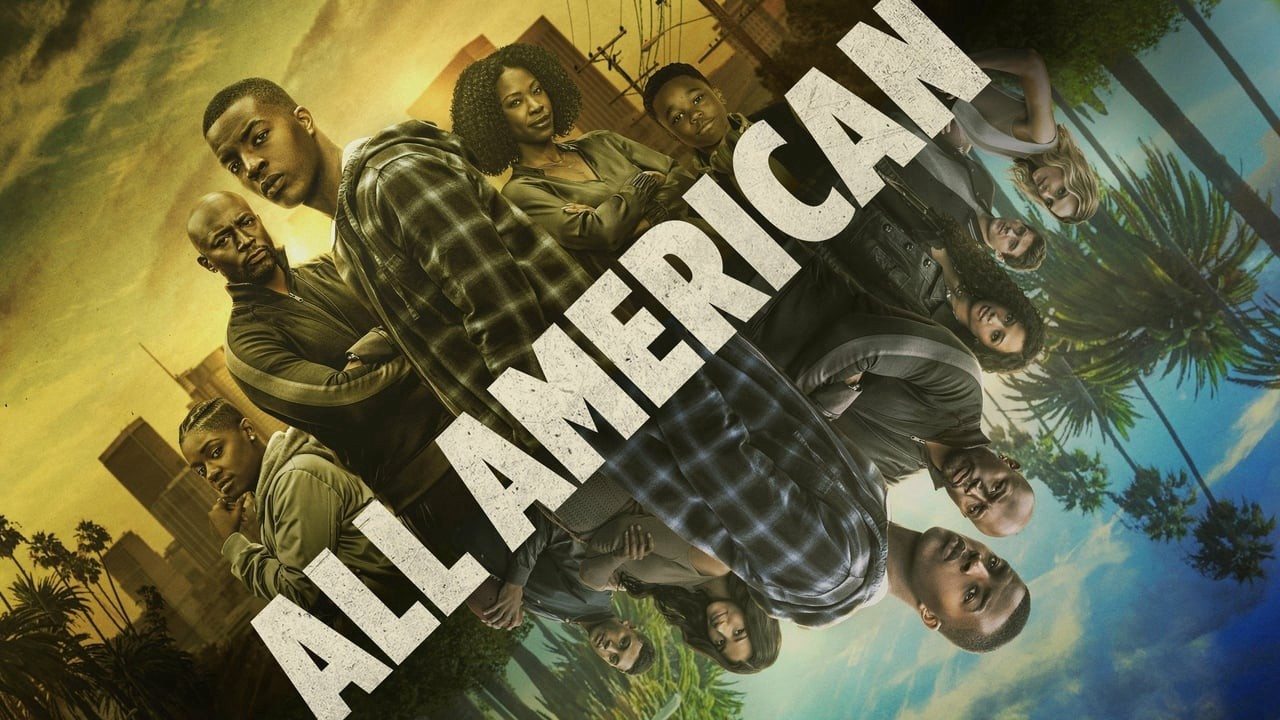 You know how the CW sometimes has a reputation for trash tv? First 2 seasons of The Flash and Arrow aside, I don’t know how they’re still pulling numbers, but a few weeks of stay-at-home orders and a vast array of things to watch will have you 6 episodes deep into a show you used to openly hate on. That’s how I wound up running through seasons of All-American like Marshawn Lynch hopped up on skittles and being surprised by how invested I was in this show based on the true story of a black man from the hood who made it out of his tough situation and became an NFL player.

Don’t get me wrong. There are plenty of moments that remind you this is an at-times, poorly written CW teen drama. Luckily, the good outweighs the bad as they get you intrigued with Taye Diggs and ridiculously good-looking actors, then center the show around the great game of football and the exciting young actors that play their positions well. All-American is all about Spencer James, a kid from the mean streets of South Crenshaw, LA who transfers to Beverly Hills high school in hopes for a better life and a shot at the NFL. On paper, it’s a polarizing tale about poverty and equity. Take the time to peel back those layers and it becomes a divisive take on access, abandonment, addiction, and social justice issues.

While the first episode has it meh moments and eye-roll worthy scenes, it sets the tone that they’re not afraid to dive headfirst into the complex dynamics of single mothers in America, race, privilege, and a dash of nerdom. In one of the first scenes of the show, Spencer’s little brother puts his mom onto the fact that “There’s only two kind of people in this world, people who read Saga, and people who don’t. You don’t want to be the latter.” I mean, the kid ain’t wrong…

Is it Even a Story About LA Without Gang Violence?

The Crenshaw gang life are the toughest aspects of this show to accept. It’s as if they decided to triple down on the acceptable amount of bloods and gang-related heartache any show should allow. Sure, the writers sprinkle a touch of genuinely difficult decisions that teenagers in the hood go through, but my God do they beat you over the head with the repetitive forks in the road black men and women face when trying to forge a path out.

The growing pains are real, but there are great moments like when Spencer said to Coop, “You’re not meant for this life. And that don’t mean you weak, that means you’re strong”. Powerful thing to see when executed well. By the end of the first season it becomes clear that they needed the rocky start to get to a place where they could discuss the complexities of this world including dueling ideologies of gangbanging in the hood.

That Best Friend You Wish You had Growing Up

From jump street, it’s clear one of the only reasons Spencer is able to keep his eyes on the prize and not come running back to the place he used to call home, is because of his best friend Coop. The honest, black, musically inclined lesbian who dresses however she dam well pleases serves as Spencer’s tether to Crenshaw. Like a true best friend, she is always there for the titular character. While the football stud is away, she helps out the James family so Spencer can keep his dreams alive, and she remains ever ready to handle some real ass business, even when she knows it’ll lead her down a path that will piss her boy off. 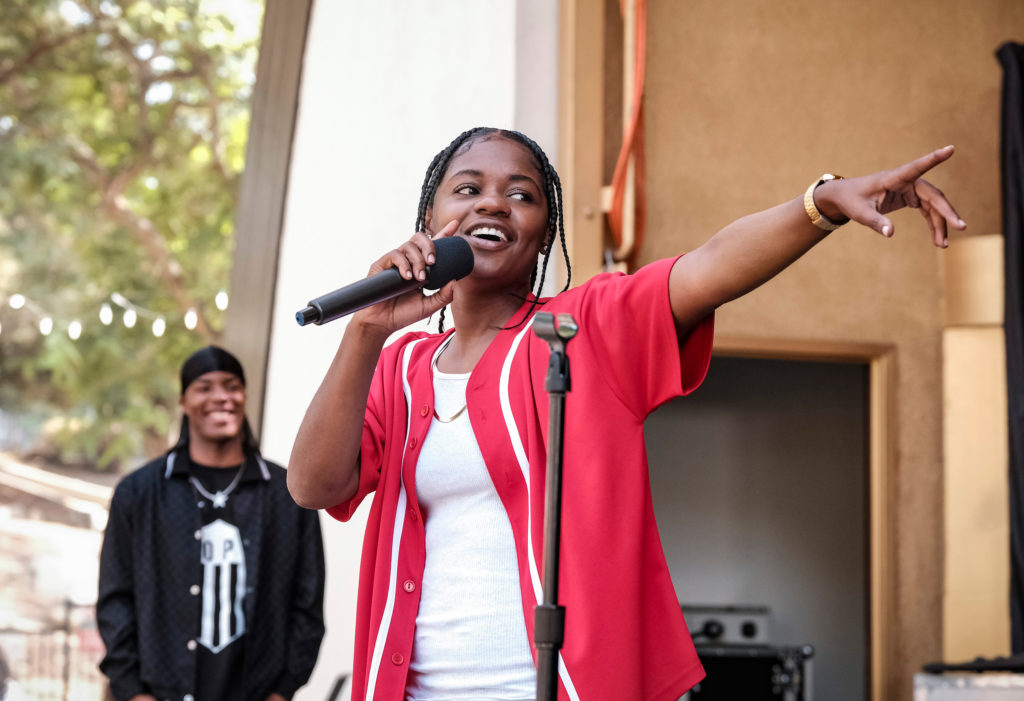 As the season progresses, Coop gets pulled into some Bloody situations, but it was always one foot in and one foot out that life. Spencer and Coop’s homie Shawn is who the writers use as their main vehicle to show how easily someone can get got in the ghetto. The unfortunate ending of Shawn and Coop’s involvement with the Bloods works, and the pivotal episode #9 titled “Funeral” is a powerful one that reminds you this show has the capacity to be a compelling drama, but they struggle to get there and it makes you shake your head at the portrayal of LA gangs way too much.

While Coop’s story suffers in that aspect, actress Bre-Z excels when it comes to her much grittier scenes involving vocally coming out and dealing with the fallout of those spoken truths. I know, it sounds kind of wild to say LGBTQ centered scenes are tougher than gun bussin gang ones, but boy is that a fact. Coop’s interaction with her strong, harsh belief having, God fearing mother are some of the best I’ve seen. The contention the hood this has for the LGTBQ community has remained one of the most disappointing aspects of our people and All-American showcases this in an authentic way, with an incredible payoff.

Why is Spencer Always So Damn Angry?

All-American takes on an ambitious amount of pressure trying to give all of the characters’ issues screen time. Spencer’s integration into the Beverly Eagles football team takes up so much room alone. Then they add Coop’s gang ties, her gay struggles, a few key issues with the Beverly students, and some wildly over the top secrets Coach Baker and Spencer’s mom are keeping. With all of that going on, they seem to have too much time to rely so heavily on the themes of abandonment, absentee fathers, and “why me?”. Without Daniel Ezra, this coulda got real ugly.

Spencer stay mad. He is not afraid to tell the world that he’s angry his father left him and Dillon. He doesn’t shy away from owning the fact that his rage fuels his on-field prowess. Yet, he’s always questioning why he got the golden ticket out of Crenshaw. There are a few scenes that gave me Will Smith in “that episode of Fresh Prince” vibes, but by the end of the season it gets pretty dam annoying to see them rehashing the same hurt angles.

The reasons why I found myself enjoying this CW football drama were the smaller moments that can go unnoticed. I found solace in the quick comebacks that some pass over, but I found to be a quotable I needed to jot down because it would a great one-liner in my own life, or as a great reference if I ever decided to write about this show I openly and undeservedly shat on for 2 years.

One of the earliest examples of these moments was after Spencer helps his biggest hater, Asher, fix up then find his dad’s stolen old muscle car. After the dust settles, he levels with a boy who fell from wealth and grace and realizes “Just because it’s not life or death out here doesn’t mean the pain ain’t real”. It’s his biggest epiphany that everyone, of all ethnicities and tax brackets, have problems.

If that was the moment that made me realize this show isn’t as bad as I had made it out to be, the moment that gave me the conviction to spit barz about it was when Spencer gives his player of the year acceptance speech. After beginning the traditional thanking of his mom, coach and everyone you’d expect, he decides to read the names of slain black men from Crenshaw including one close to him. It hits home hard, as I’ve seen my fair share of Black men murdered due to random acts of violence or gang involvement. Spencer turns that ritzy ceremony into a tender scene that All-American can be proud of.

The show does a good job of taking advantage of the small joys and positive moments in a young person’s life, and in particular, a young black man’s life. It’s your mom, little brother and homie calling you up first thing in the morning and wishing you happy birthday like Jodeci.

It’s taking your moms special birthday baked goods very, very seriously when your boy tries to snag a bite. It’s the conversations about who the greatest rapper of all time is. There are jokes that are made that cause genuine chuckles. There are eye-raising acting moments that force you to question just how old these “high school students” are in real life (anywhere from 23 to 33 in case you needed that fact check).

The greatest influence episode was one of the smartest of the series. Writers: Write more of those stories.

Speaking of the writers, they fell a little flat introducing the genuine and downright angelic side of Shawn, but the martyr they created looks so dam good in hindsight. I’m telling you, I was so upset when they blindsided me with that low key protector, look but I’ll be damned if they ain’t finesse this flashback flow!

The love triangles that are woven all throughout the season are ridiculous but it…improves.

The music is typically fire. Like, not much more needs to be said besides that.

Spencer is a great main character to watch as he comes to grips with his new reality.

I’m sure once you’re done with season 1, you’ll be looking to get through the next one. Well, I’m happy to report that Season 2 does a great job of improving, especially at highlighting social justice issues like racial profiling, gentrification as well as death, depression, and rehab. They even touch on the acceptance of being an escort and how that can play out in future family dynamics. All-American is based on a true story but the showrunners take all the liberties they need to fit their narratives and create the dramatics that keep viewers coming back.