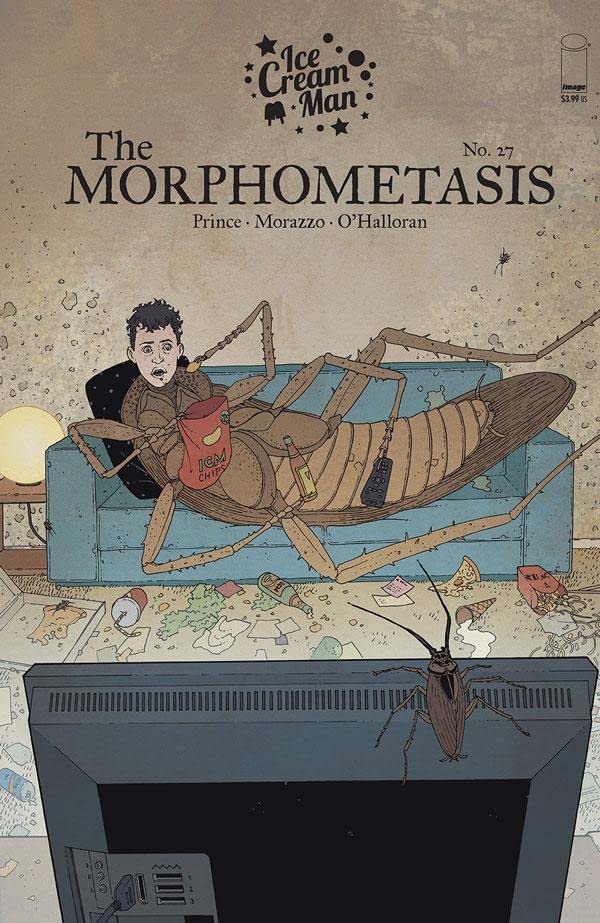 However weird you think this comic will be, I can assure you it s probably weirder and also probably a lot more philosophical than you’re probably expecting. After becoming enthralled with the series last issue, I made it a point to keep an eye out for the next installment, and Ice Cream Man #27 justified this instinct.

As the name of the issue suggests, Ice Cream Man #27 is an inversion of the famous Kafka story, The Metamorphosis, where a man turns into a cockroach. Which mean yeah, in the 28 some pages, we get the story of a cockroach that turns into a man. And not just any man, but a “Grg” who has a child and a wife and an office job. It’s a brutally simple inversion of an iconic premise, but my god do Prince and Morazzo manage to make it work more brilliantly.

If you’re a bit of an entomophobe, you may want to skip this one. After the obligatory cold open of a man eating ice cream, we are introduced to the cockroach “Grg,” and it is actively impressive how much personality Morazzo manages to give a cockroach given that insects aren’t capable of emoting with facial features. However, there is a surprising amount that can be done with antennae and legs. Now couple that with Prince’s deliberately broken grammar and spelling of the cockroach primitive vernacular, and we get a surprising baseline to understand Grg the insect before he transforms to Greg the humanoid insectoid monstrosity and Greg, the office worker (a pointedly similar type of insect in the grand scheme of the office environment).

The sequence of transition is oddly poignant, as the monologue becomes more refined and more self-confident, although the existential crisis of an insect becoming a human is still very much in play. Between the corporeal dissonance of no longer having an exoskeleton and the mental dissonance of having to deal with a mortgage among other things, Greg’s only comfort and familiarity comes from being confined. And that type of musing and naval gazing digs at you right at the stomach.

The Morphometasis takes a simple concept and does manages to achieve so much within the confines of the pages. This is an expertly crafted book, and you’re able to pick this comic up and be emotionally devastated without any prior investment. It’s a steal really.