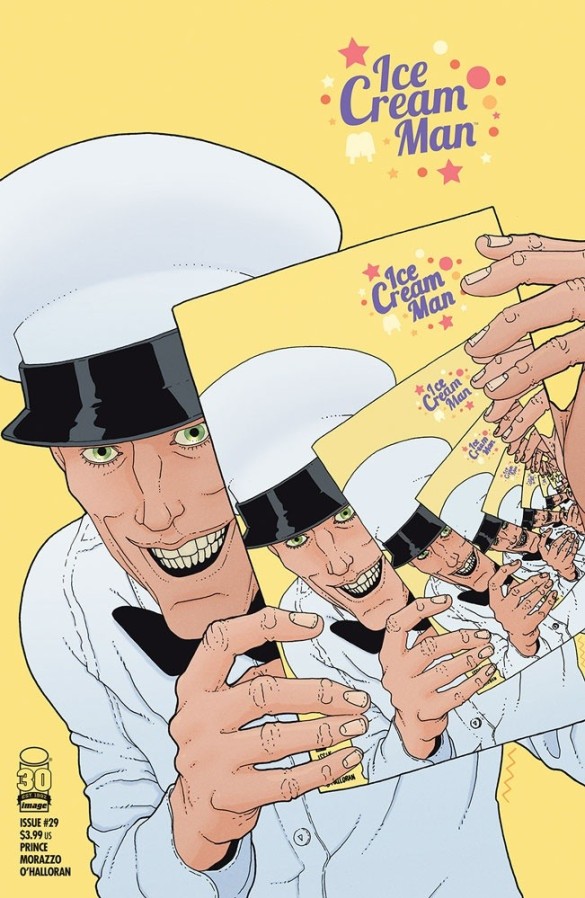 Welcome back to my continual coverage of the weird existential anthology series that is Ice Cream Man. Last time we talked, there was a cockroach that became a human, last issue evolved some etymology, and this time around, we’re attending the funeral of a W.M. Parson (and the fact that the character question shares the initials and physical similarities with the author of the comic is not lost on me in the slightest).

Ice Cream Man #29 starts out eerily normal for the series, as it opens with a man at a bar mourning his friend. It then pivots to a funeral where the eponymous Ice Cream is reading a eulogy that explains the complete normalcy of Parson’s life before casually mentioning a squid living in his sternum with a little too specific details of physical sensations for a metaphor. Then, you remember that this is a comic predicated on the surreal, and that this is only the start of the descent of the madness that is the monthly dose of Ice Cream Man.

And as the story oscillates between the dramatic retelling of Will Parson’s life and his initially unnamed friend processing grief through, and I quote, “a grand and great adventure of loss” as described by a foxy carnival barker, there is a fascinating cadence that develops. Ice Cream Man #29 revolves around the things the dead leave behind, both in the grand senses and the mundane senses. The wishes for our loved ones, the regrets we had, and the weird processing of grief.

And despite the carnival barker fox, this is a surprisingly grounded issue . There are still plenty of bizarre visuals courtesy of Morazzo having a lot of fun with the escalating odd imagery that Prince has stuck into the script, but at its core, it’s not that functionally different than any other story of grief that starts at a bar. Of course, there’s a very unsettling narrator and a slightly untethered sense to it all, but it all works.

Every time I pick up an issue of Ice Cream Man, I garner more and more appreciation for the anthology. I have come to love the loosely connected tales like episodes of The Twilight Zone, and the ability to revel in a weird world and have a small bout of existentialism on a Wednesday. It’s oddly comforting in a way, to be confronted with your own mortality and sense of self.