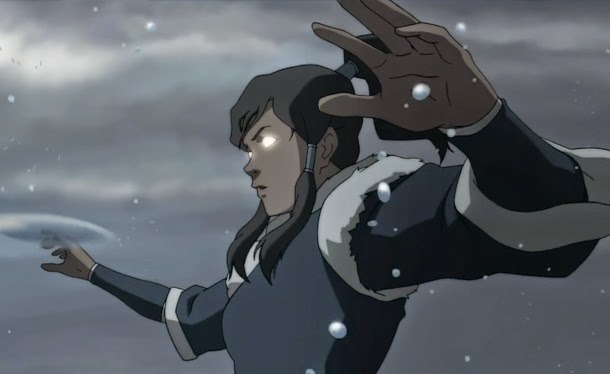 Since Nickelodeon is basically ambushing us with Legend of Korra: Book Three in about a week, the fan-whine about Book Two has begun bum-rushing the internet in 300 Spartan phalanx attack fashion. Recently, I’ve been in debate with friends/readers about the (I admit) somewhat bizarre ending we’re left with, Korra making bad decisions too often, the consequences of Korra getting her ass handed to her (at first) by her evil uncle leaving her cut off from Avatars past forever and Korra’s particularly “turn down for what” decision regarding the spirit world.

First of all, it’s not exactly a sure bet that Korra will never be able to talk to the spirits ever again. Remember when we all the writers went out of the way to convince us that Aang would never be able to consciously control the Avatar state when he gave up on unlocking his chakras to rescue Katara (which was “Arwen giving up her immortality for Aragorn” levels of awesome)? And remember when they hammered the point home AGAIN by having Azula shoot Aang in the back with lightning, destroying his chakra points? Now, remember how permanent THAT turned out to be?

The argument (and I think they’re really talking about Korra’s character as a whole) is that this Avatar, whose job it is to be in charge of all the world, spirits and man alike is making such bad decisions. On one hand, it’s sort of understandable. In the context of the world we’re given in the show, being Kung Fu Jesus isn’t exactly on a volunteer basis like being a superhero. Superman, for instance, does what he does because of a personal sense of responsibility to help mankind ascend to greatness. Meanwhile, mastering the four elements and “bringing balance to the world” is almost a societal mandate. It’s a task you’re born to and are expected to carry out because the assumption is that society has gone out of its way to make sure you’re able to do so (sent to live with the best teachers and train alongside them, the White Lotus society guarding you day and night). With the wisdom and power of hundreds of past lives at your side, the perception is that you should have NO excuse for not knowing what to do in every possible situation.

However, I used Superman and an example because I believe that a lot of Aang fans are internalizing this narrative the same way Superman fans internalized the Jesus narrative that has been subtly and not-so-subtly laid out over the years (I didn’t bring up Man of Steel in particular because I recognize now that there HAS to be a Man of Steel debate every single time you mention it). But let’s face it, folks. Korra isn’t the first avatar to do something stupid.

Exhibit A: Avatar Wan, the first Avatar, came across Raava, the universal symbol of light in an eternal struggle against Vaatu, the universal embodiment of darkness. All Vaatu, who is dressed in black and talks like the Master Control Program from Tron, had to do is say “I’m the good guy! She’s evil! Save me!” and Wan basically freed him on the honor system.

Exhibit B: Avatar Roku’s best friend, Firelord Sozin decided to go against his wishes and expand the Fire Nation empire to other provinces (basically think of Vladimir Putin except charming). Instead of ending his reign right then and there, Roku gave Sozin the “Homeboy Pass.” Even Roku HIMSELF acknowledged this might have been a stupid move.

Exhibit C: How about that time Aang inadvertently plunged the world into 100 years of darkness and war by running away from home because the Air Temple monks wouldn’t let him play board games anymore.

Honestly, the ONLY Avatar that doesn’t have a moment of facepalm inducing stupidity on the record is Avatar Kyoshi and even that was depending on who you asked. After all, there’s a whole island of people who burn the Avatar in effigy annually because she deposed a tyrant and brought stability to a region.

And that is part of what I’m getting at here. If you’re seeing the Avatar, whoever they are at the time, through the Superman narrative, that’s one way of looking at them, but you might also be missing the point (baring in mind that Superman has the luxury of ignoring politics if he so chooses and often does, making that narrative kinda inaccurate).

Sure, the show is about someone who, from birth, is ordained to be part semi-deity/part public official/part celebrity righting wrongs and being the bridge between worlds. The best part of the Avatar franchise as a whole is that even though is clearly for children, it’s also a series about a young people (Yeah, Korra’s definitely older than Aang was but still a teenager) who are thrust into a world where geopolitics things aren’t always as simple as good defeating evil even when they should be. In this case, two children who, despite being on opposite ends of the spectrum) know almost nothing about relationships with the opposite sex, let alone the subtleties of politics are suddenly told “Save humanity but don’t fuck up society.”

Granted, the Last Airbender series is probably overall the superior show of the two, but Legend of Korra attempts to do a lot more to highlight this aspect of the Avatar’s than its predecessor. In Book One, Korra’s war with the Equalist army was not only a Occupy-like metaphor (a slight one, but still) for the sociopolitical aspects that would realistically come from the relationship between bender and non-benders (who, to my recollection, didn’t get much real spotlight in Last Airbender), it was a war against ideology. Amon didn’t just have bloodbending on his side. He had the darker, quarreling aspect of human nature. Before ever laying a hand on anyone, his rhetoric was his greatest weapon.

In Book Two, in addition to being caught in the middle of a generational struggle between her father and her uncle (not unlike Miles Morales in Ultimate Spider Man….which I didn’t hear any complaining about….probably because it was awesome), she had to fight dark spirits while keeping warring factions who’d been at odds long before she came on the scene. At some point, even keeping in mind that it ended badly, that meant having to take sides for the good of the whole. It wasn’t a good decision, but that’s part of growing up, too: screwing up until you eventually get it right. Sometimes, you take the wrong side. Sometimes, running into fights half cocked ends up getting pretty much all of your past lives wiped from existence. And other times, you get to save humanity from ultimate darkness piloting a giant spirit mecha.

In other words, kids (a class of human as prone to making bad decisions as they are to shining a unique light on situations) are in charge of safeguarding mankind AND, at times, the rule of law. With that in mind, they fare a lot better than any of us would. And I would think that might count for something.