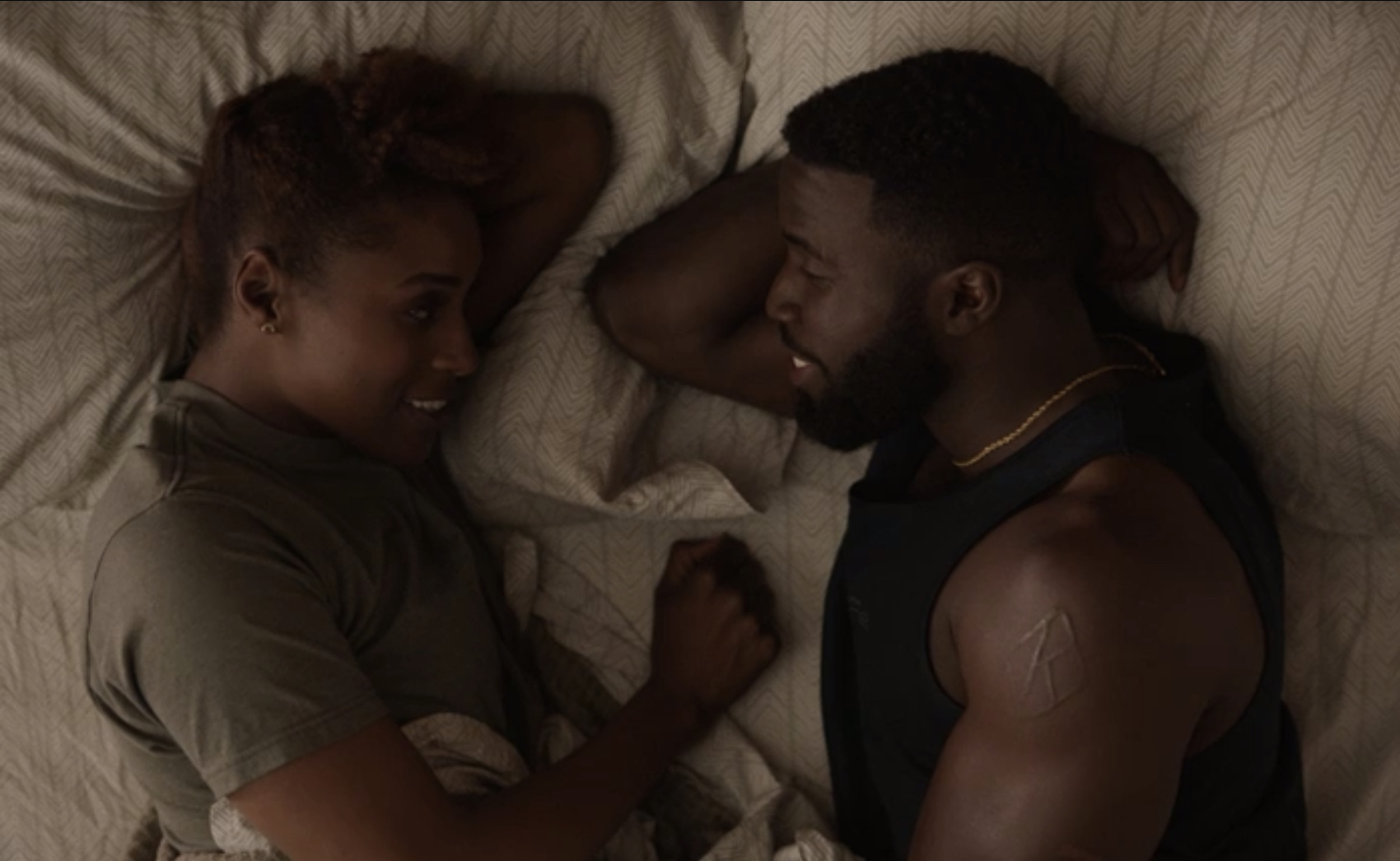 Well, looks like Ms. Issa took Daniel up on his offer of sharing his bed. Not only is she in his bed, but looks like she’s trying to Columbus his side. Blames that on him taking the good pillow when he knows she’s got a weak neck. Psssh. And homegirl’s been eating snacks in his bed, too? Seriously? Are you a hamster? “The heart wants what the heart wants.” Yeah, what Issa’s heart wants is not Flaming Hot Cheetohs, but for the time being, she’s gotta get to work.

Because Molly is extra, she takes her dog Flava Flav to get a facial and a paw massage, and Issa tags along to pick him up. Molly’s starting her dream job soon, working for an all-Black law firm where she’s sure there’s shea butter dispensers in the restrooms. On the other hand, Issa is going to interview for that property manager gig, which would both get her away from We Got Y’all and give her an apartment of her own. She confides that it’s been nice staying at Daniel’s and then admits she’s been sleeping in his bed, even though nothing has happened. Issa claims that since they’re connecting, and she doesn’t want to mess things up. Of course, Molly’s like, “Why you in his bed then?” Point.

Issa is working a job fair with Frieda, trying to recruit new folks to work at We Got Y’all who have melanin. Frieda pulls out a poster with “fun facts” about their current staff, which aren’t actually fun because, well, you’ve seen that staff. But anyway, the goal here is to hire a person of color. And while Frieda does mention that it’s illegal to hire someone on the basis of their race, she seems to be onboard with not even considering white candidates since “We’ve given white people enough time.” Okay, then.

Molly steps off the elevator for her first day of work at the new firm and is greeted by a parade of sepia-toned litigators. Score! They seem happy to have her, and she’s ecstatic to be there. “Look at us. We look like a McDonald’s commercial.” And the view from her office is pretty sweet.

Jazzy Jeff and the Fresh Flute?

Daniel has taken Issa’s advice to stop being a hater and ask for help. He’s sitting at Khalil’s kitchen table playing one of the tracks he’s been working on. But when Daniel asks him if he thinks Spyder would be interested, Khalil makes some suggestions that don’t sit quite right with Daniel. For instance, he thinks the jazz flute is “too jazzy.” “I mean, it’s a jazz flute.” We know that while Khalil has hit it big, Daniel’s not convinced about his talent. But if this will get Spyder to give him a listen, maybe it’s worth it.

Back at the job fair, We Got Y’all is getting some bites from qualified applicants, but Issa decides to take a break and grab lunch. Walking around the expo floor, she sees a marching band and dance crew made up of Black and brown kids wearing Day of the Dead makeup. They’re great. Turns out they’re from the BEAT Crew, which does music programming and education. The guy representing that org asks if she’s looking for a job, but of course, she has one. Just one she’s not particularly excited about. Frieda runs up and interrupts her to tell her there’s a good candidate for We Got Y’all interested in a role, so Issa reluctantly says goodbye.

Meanwhile, Molly’s figuring out how things work at the new firm. Seems some of the niceties she took for granted at her old job are not a thing here–like digital signing, for instance. Nope, she’s at the mercy of a courier. It’s a little thing, but she doesn’t hide her disappointment and tells her assistant that they just did things differently at her old firm. Maybe don’t start complaining on Day One, Molly-girl.

A mirror of her own.

Issa goes to her interview for property manager. It’s also her first chance to see the apartment building up close and personal. Looks like a well-placed recycling bin would cure the overflow of circulars near the mailboxes, and the building owner seems a little odd. She takes a look at one of the apartments. Huh. Wood paneling. Lots of wood paneling. But she’d get half off her rent for working just part-time. She would have to be on-call, though. Still, that’s a bathroom mirror she could get real in. And it’s hers if she wants it… 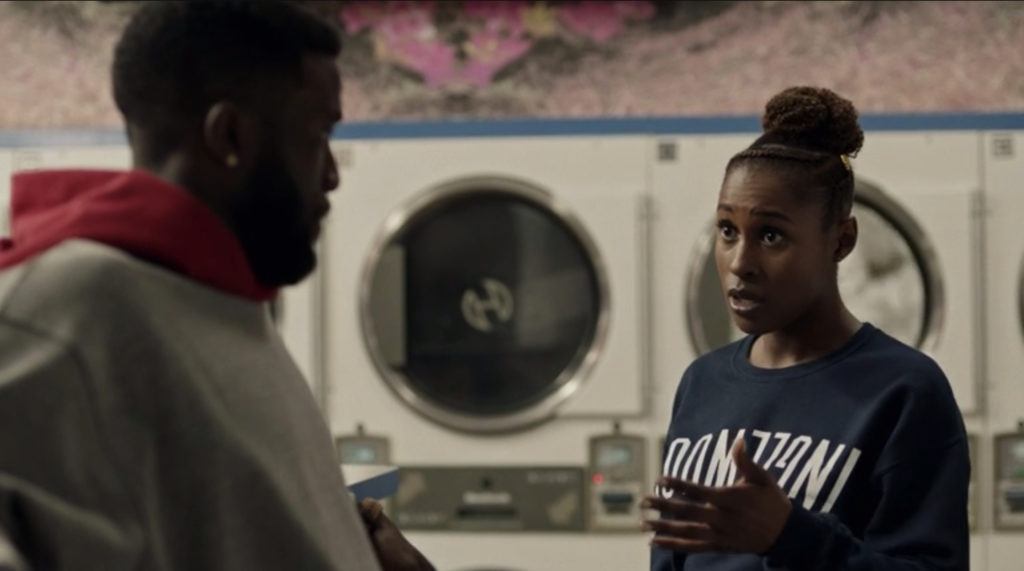 Issa and Daniel are at the laundromat, where some woman’s straight trying to jack her stuff out of the dryer while Daniel complains about Khalil dumbing down his music. Issa makes the point that once he gets to the next level, he’ll have more freedom to make the kind of music he wants to, but at least Khalil can maybe help him get there. Issa makes a joke to lighten the mood, and now they’re flirting again. She tells him that she got a job offer–and that the property management gig comes with an apartment so that she can move out of his crib. But wait a minute. Daniel doesn’t want her to go. “I like you bein’ there. Why don’t we just, you know, try keepin’ it like it is?” Oh, damn. I guess the heart wants what the heart wants.

Molly is still trying to get through her first day. Her type A self is about to work through lunch, which doesn’t seem to be a thing people do here as much, and her office is full of boxes. No off-site storage like she had at her old firm, which is beginning to a sound a lot like “one time at band camp.” Later, she’s at the bar with the girls venting. Kelli is like, “You have problems with white firms, you have problems with Black firms, you’re runnin’ out of races.” But Molly wants to know why working for a Century City firm feels like a demotion. Issa and Kelli counter with maybe she’s being so harsh because it’s a Black firm. Finally, Issa reminds her that change is hard and tells her to just give it time. Tiffany, who’s been making ditzy, irrelevant comments this whole time, once again chimes in to remind them all that she’s pregnant and also to call them out on a group chat she knows exists that she’s not on. Molly and Issa deny it, but Kelli–love her–is like, “We definitely do. For sure.” 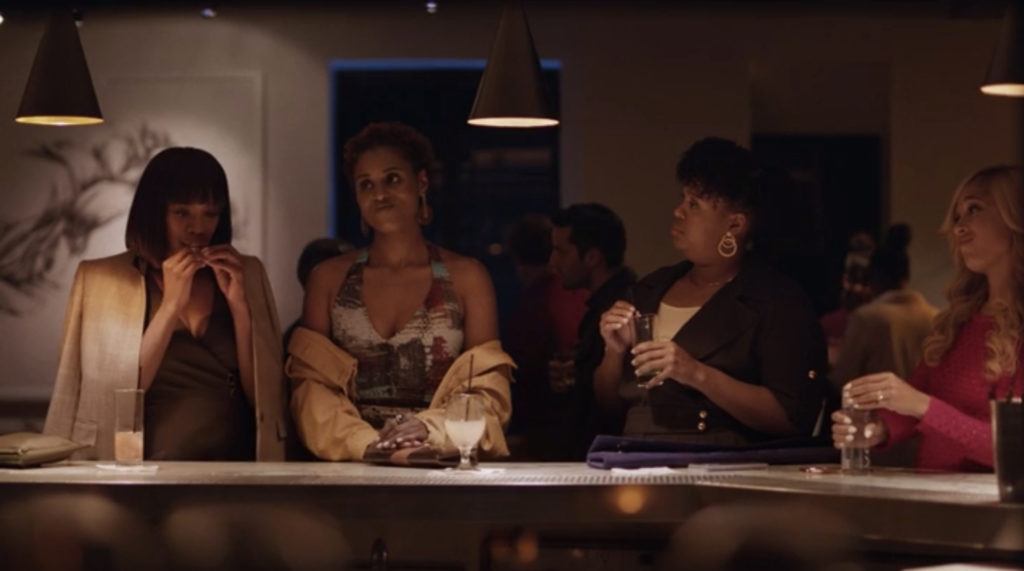 Kelli tells Issa she knows of an apartment. Sure, it’s only a half-bath and she’ll need to shower at the Y down block, but hey, it’s in her price range! Issa quietly says she’s actually going to stay at Daniel’s a while longer. Uh oh. Tiffany wants to know why she’d be down to keep sleeping on someone’s couch, but Molly mentions that she’s been in his bed. Kelli figures this means Issa has finally found a way to pay him back, but no. She doesn’t want to move out because they’re getting close, and there’s nothing standing in the way of them getting together. Well, maybe except her friends, who a Greek chorus of “NO”, because Issa plus Daniel equals problems.

Issa and Frieda are interviewing a young Black woman for the opening at We Got Y’all, and Issa seems completely distracted. When Frieda leaves the room, the woman asks Issa how she likes working there. You know, for real. And Issa says it’s a job, it is what it is, but she’s also been there for five years. That’s a long time to feel so ambivalent about it. Back at her desk later, she visits the website for The BEAT Crew and again gets that wistful look on her face. Is it time for her to make a move professionally?

Molly is in a conference room at work, and the attorneys are all going to evaluate their client roster. But Molly just can’t keep her mouth shut. “Where’s Malcolm? What, is he on CP time?” Yikes. There’s some awkward laughter, and one of the other lawyers politely tries to get Molly together–he’s on a call and usually comes in later for this meeting. But now it’s too late. Torian stage whispers, “Maybe at her old firm they started every meeting on time.” Touché.

Daniel is in the studio with Khalil when Spyder rolls through. Khalil asks him if he remembers Daniel from that night at Fais Do Do, and Spyder says, yeah. His boy got shot. Daniel asks if he’s okay, and, well, he’s not. Awkward. Khalil tells Daniel to go ahead and play the track they worked on, but he plays his original version of it, not Khalil’s edit. Khalil mentions there’s another version, and reluctantly, Daniel plays it. Seems Spyder likes both, but now it’s a pissing contest. When he can’t decide which one he’d like, Khalil tells him he has some other tracks to play for him and gives Daniel a look. Oops. Already overstepped. 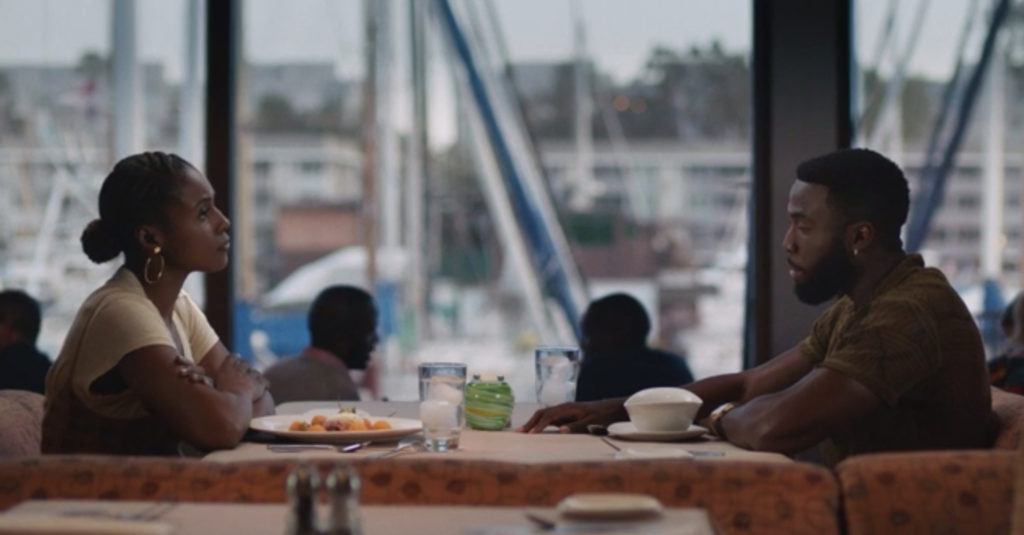 Issa takes Daniel out for a nice dinner as a thank you for letting her stay with him and to tell him that she’s taken the property manager job. He doesn’t seem thrilled, but he’s been on edge all afternoon and tells her about the meeting with Khalil and Spyder. She suggests he apologize so that he doesn’t lose what could be a great opportunity, but once again Daniel’s pride is in the way. Instead, he lashes out at Issa–about how he shouldn’t be taking career advice from someone who’s never loved what she does. Then he says he’s always needing to save her. Ouch. Especially since he was the one trying to get her to pass up on some independence and stay in his house.

That night, they’re lying back to back in his bed. She’s obviously hurt. He tells her he was just upset about the thing with Khalil in lieu of apologizing and then rolls over and starts kissing her arm. We’re now back at the beginning of the episode when she was daydreaming about their bed-sharing being less platonic. But she can’t do it. It just doesn’t feel right, so Daniel retreats to his side of the bed.

Welp. When’s moving day? ‘Cause it seems like Issa getting into her own place ASAP is a good idea.