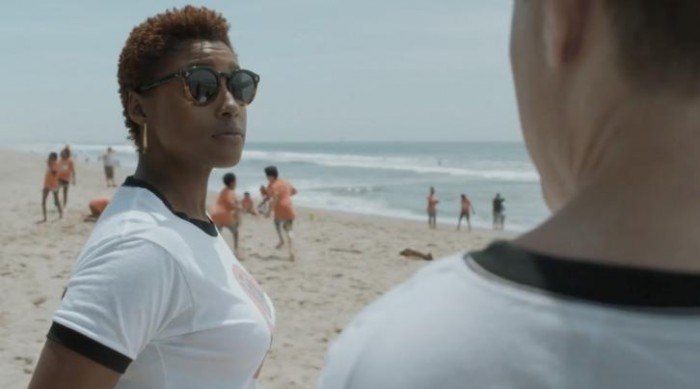 Talk about kickin’ this ep off with the awkwardness. We see Issa in bed wrapping her head, as most Black women are known for, before we go to sleep. Lawrence walks in and turns off the light and there’s this ridiculously uncomfortable exchange between the two. It feels like this is their first bed time routine, not their fifth year. Issa wants to read. Lawrence wants to sleep. They try to appease each other. Lawrence goes for the snuggle and Issa hits him with the “cold hands, who dis?” These cats toss and turn all night. Waking up from nothing. Bruh.

Fast forward to the work day and Lawrence is working with a job coach/hunter trying to get his life. Shit is so real for this dude. It’s nice to see him out of sweatpants, but damn. He can’t seem to win for losing. Jump hunting for two weeks to come up with nothing only to be told to lower your standards. Lawrence ain’t the settling type. He’s broke but ambitious. Then we head over to Molly meeting the new Black woman in the firm and let’s talk about the realness that happens when you go from being the only to the other. That feeling is written all over her face.

Excitement, hesitation, feeling the need to protect your shit and the need to help a sistah out all rolled into one. Real. Slide over to Issa at work and she overhears her non-Black co-workers tryna read her beach outing for the kids. They’re doubting her, questioning whether it will even work and doing this all behind her back. When she rolls up on ’em in the staff lounge ain’t nobody got shit to say though. She finds out that they’ve been sending emails to her project partner. Yeah. That ole sneak attack type, doubt-the-Black-girl-because-she-f*cked-up-once shit.

We move to Issa coming home to Lawrence and just venting like a mug. She’s giving him the low down on “white doubt” and he’s all ears and encouragement. He also gives her the “work extra hard to prove’em wrong” line that most folks of color know all too well. When Lawrence gets real with her about not getting the positions he’s going after, Issa ain’t hearing it. She basically just stops listening, goes all monotone and Lawrence calls her on her shit. Good for him. Issa isn’t feeling the “don’t settle for less vibe” that Lawrence is putting down. SWEATERGAWD (as my home girl Brittany says) this shit is the realest. It’s so hard to support dreams when bills need paid. Settling for anything in order to stop robbing Peter to pay Paul is some adulting level type shit that ain’t nobody REALLY tryna do.

That’s what this exchange is about. It’s about business. Mixing business and love, tho? That shit ain’t fair. It’s real, but it ain’t fair. It’s also about putting your all into what you want and it doesn’t quite look like Issa wants to be with Lawrence. Dude is trying, too. I’ll give him that. But, when Issa says she’s stepping out with Molly and he hit her with the “You coming home, right…. Don’t let me catch you in Rite-Aid” I swear I ain’t never face-palmed myself so hard. Dude…. no. Not yet, man.

Moving right along to Issa and Molly standing outside of a taco truck with Molly tryna help a sistah out by telling her to check herself as much as she’s checking Lawrence. Issa can’t see it, tho. She’s not owning up and karma bites her hungry ass in the butt when she drops that taco meat straight outta the shell. That’s jacked up. Issa’s a good friend, though. Hangry and all she goes with Molly to a party to help peep out cutie pie from the club and see if he’s legit.

Cue the quintessential Black elite gathering known to all Black movies of the 90’s and we see that Molly is a member of Alpha Kappa Alpha Sorority, Incorporated. Kudos to the Black Greek nod and those hardwood floors. This scene is shadier than every line Sophia could deliver before and after Shady Pines burned down (s/o to the Golden Girls). You’ve got the nod to Molly’s Fendi and the diss to Issa’s Chucks in the same breath. Molly’s soror and her husband are trying to get Molly to spill the tea on her new guy and hook her up at the same time. Her home girl Kelly, tho! You always need that home girl to support you getting some. Body positivity for the win. When Jared (cutie pie from the club) finally shows up, it’s all eyes and ears on him.

Issa peaces out and the gang moves into another room for the “Black women too strong” speech. The only thing that I have to say is that Jared shut that shit all the way down. All [clap] the [clap] way [clap] down [clap]. The energy shifts when the group finds out the Jared didn’t go to college. Thank goodness for Kelly and her crazy ass for making it light again by asking for all of Jared’s friends’ numbers. Outside after the party, Jared and Molly let one another know that their interested and they share a kiss by the car. Okay, hopefulness. It’s looking like Molly’s getting the answers she’s been looking for.

Now we’re in the next day and Issa’s beach trip for the kids in “We Got Y’all.” The bus is packed. It’s as hot as a butt crack in a polyester suit. The kids are cranky. Issa’s co-workers still ain’t loyal. Issa tries to give the kids the whole “we in mixed (wypipo) company” talk and it all seems like it’s going down hill.

Switch over to Lawrence walking outside of a bank and talking to his head hunter to find out he’s had another amazing interview that didn’t land him the job. He’s down. This brother just can’t catch a break, but he does get some encouragement from the bank teller when he goes to deposit his unemployment check.

We head back to the beach and the kids are having a blast. They’re building sandcastles, running from the waves and still putting in service by picking up trash. Issa is winning and her hating ass co-workers can’t say anything. Issa puts one of them in check when he comes up to her on some ole “why aren’t more of THEM swimming?” Yeah. She checks him alright. One very simple answer.

Yeah… say that shit louder so we can here you in the back. Her project partner had to give Issa her props and the kids who gave her shit on the bus showed her love. She threw shade where it was needed and left the beach like a boss. Meanwhile, Molly is at work and hears the new Black girl DaDa before she sees her. She takes it upon herself to give DaDa the friendly Black woman in a White man’s world code-switching talk that DaDa did not come there for. DaDa kindly checks Molly and goes on about her business. This shit is hard because it makes you think about your own “white-gaze” and how the perception of the “loud and ratchet Black woman” doesn’t always come from other folks. Sometimes, it comes from us. I ain’t talkin’ “Uncle Ruckus” style, but not as far from it as one might think.

We transition to Issa walking up to her crib while on the phone with Molly. Molly just got into some dating site that she’s been wait listed on for three months. Issa is confused because, I mean… Molly and Jared seem to have something blossoming, but it seems that Molly has let her soror and the elite squad get her in her feelings about Jared not having a college degree. She’s not ready to hear Issa check her the same way Issa wasn’t ready before.

Issa walks in to Lawrence putting it down in the kitchen. She seems shocked, but still a mix between weary and ungrateful. Dude is for real trying. He fixes her plate. She takes it to the couch. He had set the table. One spill leads to an argument and the next thing you know, Issa is traveling down memory lane remembering the love she used to feel for Lawrence. This little sofa montage has a super clean and smooth 90’s Spike Lee feel to it. It also wakes Issa up and she begins to really ‘see’ Lawrence again. He tells her that he took a job at Best Buy in order to step his responsibilities-around-the-crib game up and they both seem to commit to being all in for each other.

From there we see Molly outside of a swanky restaurant on the phone with Jared.He’s checking to see if she wants lunch and she’s putting him on the side line. When he calls her on it, she tries to say that she’s not looking for a relationship when *pause* he knows what the deal is. Molly’s on some “let’s be friends” type shit because he didn’t go to college and she’s trying to save face with her bougie ass friends. She’s hanging up with Jared and walking inside for a date from that elitist ass site. Ok, girl.

We get back to The Dunes and see Issa and Lawrence carrying out the sofa. They sit it on the corner, cuddle up in it one last time and seemingly start on the next leg of their future together. The joke about whether or not someone will want the old sofa and our gangsta neighbor who doesn’t use the /k/ sound rolls up asking about the “bouch.” Comic relief for the win. Always. 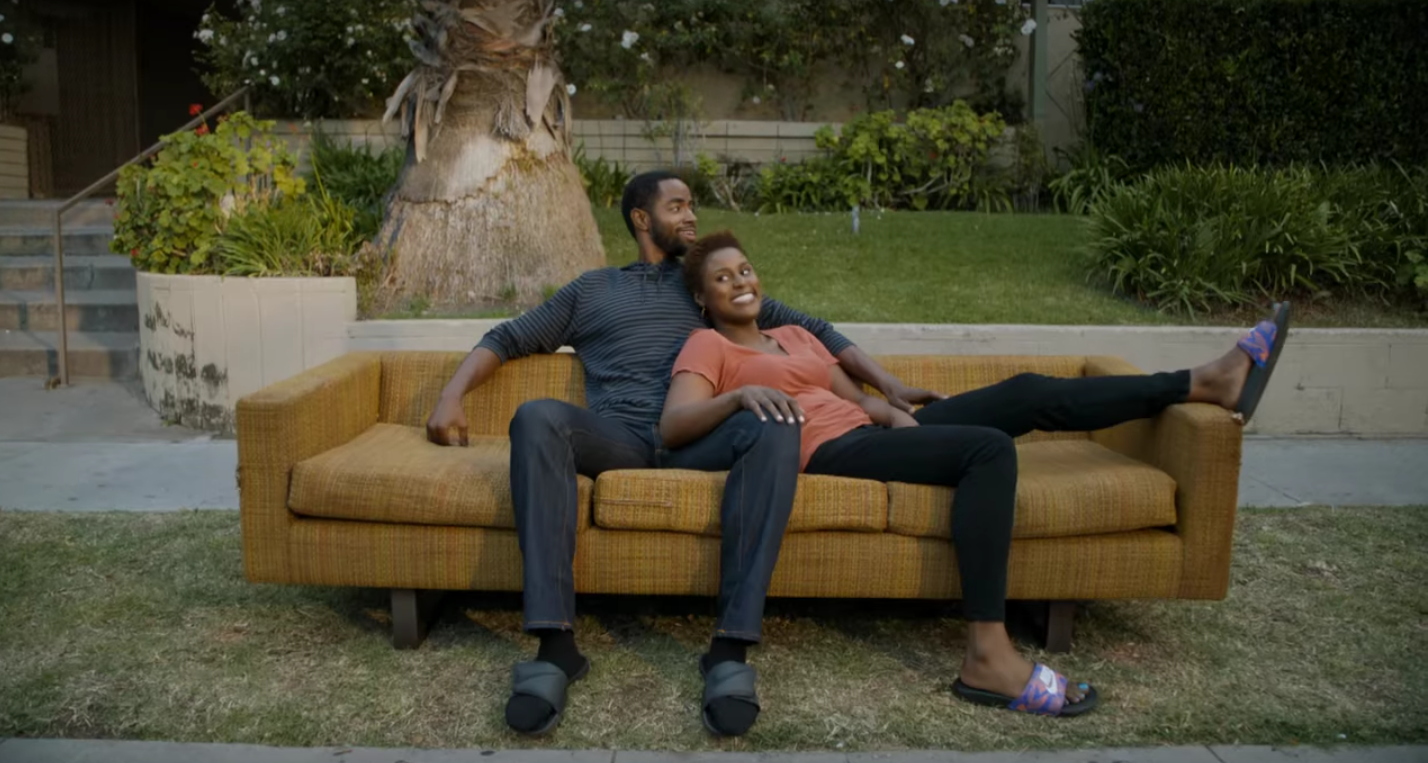 This third episode seems to really get to the heart of the show now. For the most part, it seems that the integral characters have been introduced and their backstories have been laid. I’m really looking forward to seeing this show pick up pace and stay with the funny at the same time. Issa Rae seems to have a knack for that and Insecure is keeping true to her writing style.