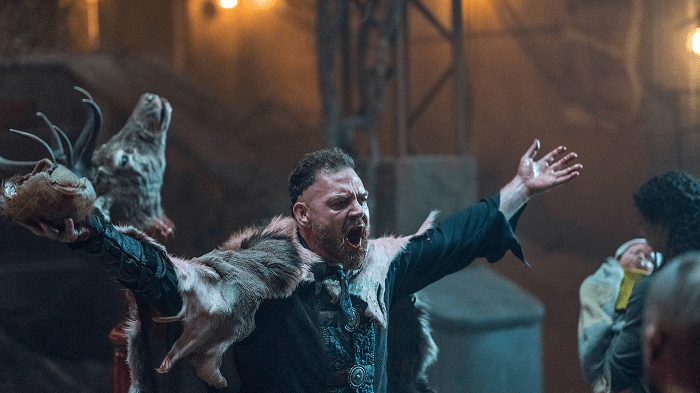 ***Spoilers be getting tossed back through industrial fans***

And you say Clipp City!!!

Ayo! Its FIGHT NIGHT. Sunny celebrating Durag History Week but the celebration short-lived because your boy rockin’ out with his secret out. Boss man putting him up against Mouse. Which is like nicknaming someone from Trump’s administration, “Human.” Sunny said he don’t kill for others anymore, but if anyone mention Veil’s name, I’m pretty sure that Sunny would let them bodies pile up. Bajie all up on that laughin’ at massa’s jokes shit, until he get chained to Sunny cuz the boss is a lot of things, but a haven for snitches ain’t one of them. Now these cats linked at the wrist when Mouse come walkin’ out. Dude look like the archangel Gabriel that been on Earth so long he said fuck it and ripped off his own wings. 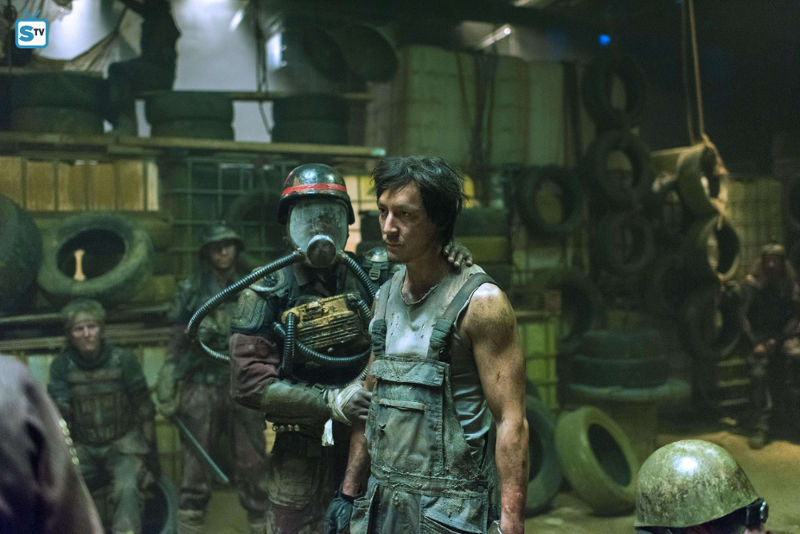 Quick aside: Why the boss got his throne wrapped in plastic like that shit was at his Black grandma’s house before he stole it? At least get you the good sofa from the room you weren’t allowed to go in.

Sunny doing most of the heavy lifting, but at least Bajie ain’t completely useless. They knock down Mouse and keeping it moving to the stairway to make a break for it. But outs be following these cats and because shit wasn’t unfair enough already, considering dude bigger than both Sunny and Bajie in total mass, this muthafucka grabs a machete too? Sheeeeyet. Bajie saves Sunny from getting too much taken off the top from the big ass fan, but Mouse holding on to Sunny legs for the escape like Paul Ryan been holding on to the idea that his reign as Speaker ain’t a total fucking disaster. They make it to the other side of the fan before the fan starts, but Sunny gives Mouse that Liu Kang bicycle kick and turns Mouse into ground turkey. Mouse legit became someone’s taco salad fam. No shell. 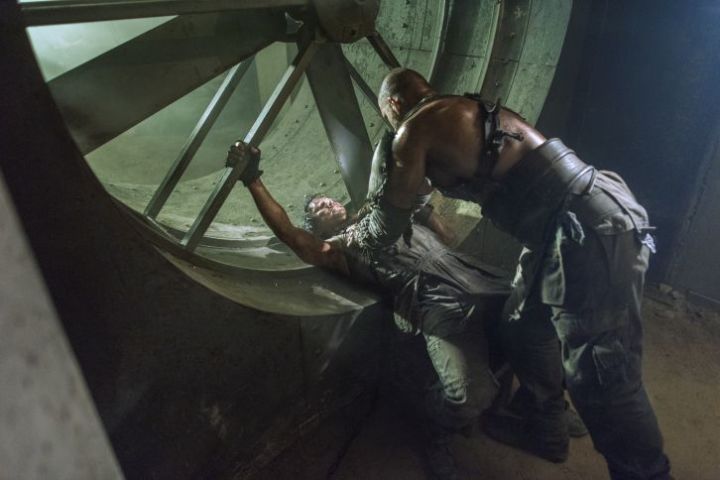 The Buddy Cop duo gets outside and Bajie happy to see grass again. Sheeeyet, I’m happy to see something other than the color brown. These muthafuckas been living with the subterraneans and shit since we seen them in the camp.

WALDO BACK. Seems the handicap-able god landed with the Widow and he been grading Tilda’s stealth skills. He telling war stories about when he was regent, but Tilda is like, blah blah, masculinity, blah blah, patriarchy, blah blah something ableist. Waldo is like, yeah, ok, keep talkin’ that shit while you out here calling the code red on defenseless cats in the woods. Neither of them have heard shit about Sunny or M.K. since they both got snatched and think they’re both dead. I guess the River King been too busy planning how he gonna slay at Woodstock to return any messages.

Lydia helping officiate a wedding at her pops congregation. She all the way in fam. Seem at peace. Smiling with happy people. Tables full of food. Everybody hugging and rockin’ the flower snapchat filters on their head.

THIS THE BADLANDS Y’ALL, YOU KNOW WE CAN’T HAVE NICE SHIT LIKE THIS!

Everybody toasting the gods but none of these people remember the Old Testament apparently. Reese the new groom gets up to toast AND GOT SPEARED TO A GOTDAMN TREE. What the fuck man!?!? I know we don’t rock guns anymore, but there is nothing comparable to a warning shot! Can’t you spear a muthafucka in the calf or some shit first so I know it’s real?!?! Well, Reese is a fuckin’ sticky note now, someone else tries to jump the nomads and he gets his guts hacked out with a hatchet. NO. FUCKIN’. CHILL. They bout to take the bride on some Braveheart, English marriage rights shit, but then one of the nomads sees pops just lookin’ at him. Dude don’t like folks peepin’ his soul like that, so he bout to give Lydia’s pops the fade in front of everyone and his gods, but Lydia remembered she used to be married to the fiercest baron in the land and was like FUCK THAT, B. Lydia gave your dude the the knife work like she was trying to poke holes in the top of a jar lid she was keeping fireflies in. One dude down, then she go at the other one till they on the ground wrestling and dude tries to choke Lydia out.

If you’re wondering why I haven’t mentioned the 30 other people at this party its because THEY AIN’T FUCKIN’ DOING ANYTHING. They watching this murder and mayhem go down like it’s the Final Four, B! Lydia’s pops watched while his daughter’s eyes started to roll back in her head and wasn’t gonna do shit, yo. Lydia out here drenched in these muthafuckas blood and her pops is like how dare you. I really wanted Lydia to hit him with the Clear and Present Danger, HOW DARE YOU SIR!

The fuck are we even talkin’ about man. Yo, if your church don’t believe God moves through you to defend yourself from the evil that exist in the world, then you need a new deity or a different read of whatever holy text you rockin’.

M.K. having bad dreams up in the hammock, probably flashing back to how he let someone do his hair like that. The Master standing over him and signals him to come, but you know Brown Boy Glorious be knowing and he seen the special treatment going down. The Master takes him to the funhouse mirrors where you can see every part of yourself. Here’s to hoping we find a somewhat likable version of this dude for the rest of the show. Master burns that paper crane sage and M.K. hits the spliff one time. Dude wake up in a graveyard of his own making.

M.K. Got. Bodies. Fam. Dude in the hood grabs him by the lapels and MK realizes that it’s the evil side of him reminding him that he massacred a group of folks in his transport. Master is like, so, I know you real shook right now, but you know gotta take your ass back up in there, right? M.K. ain’t got his nightlight with him, so he like, nah, I ain’t goin back.

Dudes walking through the forest with a fresh kill for the crew. Aww, shit, is that Quinn’s voice? Maaaaaan, look at Quinn, getting his Eurpoean Ra’s Al ghul on? Dark Knight Trilogy edition. And his folks all dressed Black? Quinn want to be League of Shadows so badddddddd.

Lydia got the blood washed off, but the scars from when she killed two muthafuckas by herself (lest we forget) are still present. She up in Baron Ryder’s home on a formal visit to ask for protection. And Ryder is like, of course mom, anything for the woman who birthed me. And then, that shit started getting good to Lydia cuz then she start offering unsolicited advice to her very fragile and unable to take critique son. I mean, on one hand, this muthafucka wouldn’t last 10 minutes in an MFA program if he can’t take some constructive criticism. But on the other, we been there man, when our folks come to the house to visit, and you get them a glass of water and they say thank you. And immediately follow up your good will with telling you how you ain’t doing shit with your life. 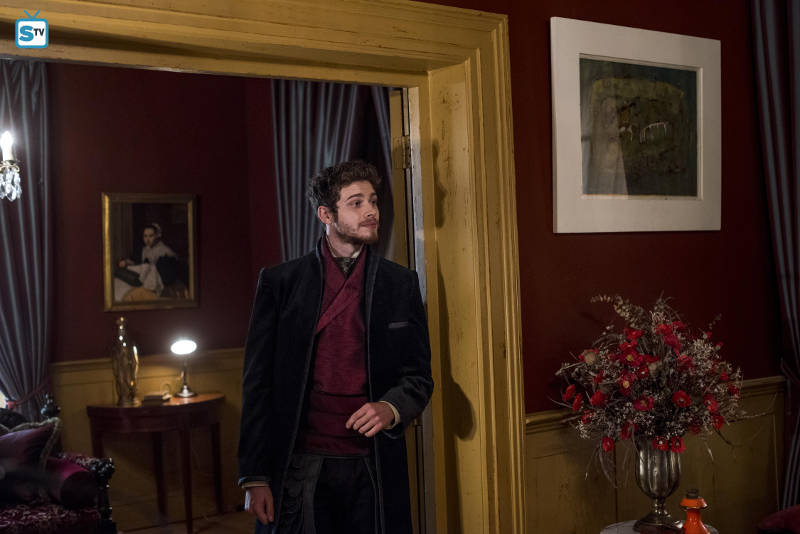 Bajie and Sunny still backpacking across the non-Badlands but Sunny is fed up with all the chit-chat. But Bajie got his uses…like finding possibly pregnant rodents for sustenance. Sunny gotta be ready to go back to the mines, fam.

Up in the mountains, Ava Zero Dawn rolls up M.K. and tells him that Tate (awww man…is that our boy BBG?!?! He got a name. I mean, I’m happy for him…but I’m still gonna call him BBG cuz that shit accurate af) ran away. But she really used that to ask MK what it’s like training with the Master. He feeling guilty cuz he killed people, but AZD is like fam, we’ve all killed people, why the fuck you think we here?

M.K. back on his mirror vision quest and Darth M.K. up in the woods waiting for him. M.K. hear his mom yelling for him and Darth M.K. is like, you traveled to the wrong barrio, fam. Also, can we take a moment to appreciate the bad ass that is Darth M.K. I know this dude gonna be defeated and that’s the whole point, but can we get a little more of Darth M.K. for at least another episode?

This is the first time I’ve liked dude. Also, Darth M.K. beat the fuck out of M.K. man. He was literally going to kill dude one slow punch to the solar plexus at a time before the Master pulled M.K. out.

WAAAAAIIITTT. Veil Da Fictional Bae can sing? Nah, Sunny gotta get home. Not now, but right the fuck now. She just here trying to nurse the newborn but cats out here creepin and Quinn don’t like that shit. There’s a baptism tonight for the baby and if you’ve seen the Godfather, you know baptisms in these environments don’t usually end well. Veil naming the boy Henry after her pops and Quinn is like…what…that supposed to have me shook? Sheeeeiiiitt.

Sunny trying to break the chain cuz next step gotta be gnawing off his own arm. Bajie picks the lock with a rat femur bone or some shit and Sunny is like, DEUCES. But something tells me that Bajie must have abandonment issues cuz he still following Sunny.

Henry bout to be baptized and Quinn is conducting the ceremony. But not before he gives dude that was creeping on Veil the early onset of blindness. Quinn straight up Deathstroke’d your dude on some hood warning shit to the rest of the League so they don’t fuck with Veil or Henry. Then this dude drank deer blood, wiped deer blood from his mouth and smeared it on a newborn’s head. That’s…that’s it. I got nothin fam.

At the Widow’s lair, Widow and Tilda sparring while Waldo, the only useful dude in Widow’s court comes in talking about Ryder calling a conclave. Ryder trying to get the other Barons to go after Widow, but she gonna show up in the slickest Black Leather this side of the apocalypse and tell them that’s a bad look.

Veil asked for some sunlight for Henry and Quinn was like, bet, let me get you a small ass closet without a roof. Typical.

Sunny ignoring Bajie until they roll up on the Great Wall — No Matt Damon — that surrounds the Badlands. A fuckin’ wall, b?

That shit look large like the Egyptians built it. I’m sure this is what Trump wants and he would go crazy if he saw it, but come on, there’s way too many brown folks on Badlands for him to be watching this shit.

So…I guess Bajie gonna be of some use after all.